Unique glass-to-metal technology is being used in new electrical penetration assemblies that are being installed at Forsmark 3 in Sweden. By Corrina Thomson 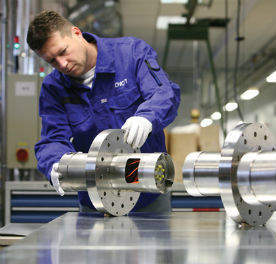 Generally speaking, an electrical penetration assembly (EPA) is an assembly of insulated electric conductors, conductor seals, module seals, and aperture seals that provides the passage of electric conductors through a single hole in the nuclear containment structure, while providing a pressure barrier between the inside and the outside of the containment.

Each reactor can have many points in the containment structure where it is necessary to install an EPA to feed through signals. Due to the importance of the integrity of the containment, it is very important that the EPAs can withstand the conditions in a reactor. If this is not the case then they can become weak points that could fail during operational or accident conditions.

Schott is supplying more than 200 EPAs to Vattenfall’s Forsmark 3, a boiling water reactor, located more than 100 km north of Stockholm. The work is part of a large-scale life-extension programme that aims to operate Ringhals 1 and 2 for 50 years and the other Swedish nuclear reactors which began operation in the 1980s — Ringhals 3 and 4, as well as Forsmark 1, 2 and 3 — for up to 60 years. "The company is planning to invest SEK 16 billion (EUR 1.7 billion) over a five-year period," said Torbjörn Wahlborg, head of Vattenfall’s nuclear power division.

Forsmark 3 was due for a six-week planned maintenance outage in August 2014. During this time, unique Schott glass-to-metal EPAs will be installed while the reactor is being refuelled and other maintenance work is carried out.

“A decision was made in January 2013 to use our high-specification products, and we were delighted to receive the order in May 2013 to supply the glass-to-metal EPAs," says Schott nuclear safety division general manager Thomas Fink.

“The rigorous testing programme of our EPAs includes endurance tests simulating a lifespan of 30 years as well as simulations of design based accidents and severe accident scenarios, such as flooding and earthquakes," Fink said.

Schott developed a new type of EPA for Forsmark 3. It is designed to withstand submerged conditions under 13m of water for at least 30 days, together with pressures of up to 8.3 bar, and temperatures up to 185°C. In addition, the EPA was also designed to withstand radiological exposure of 1.7 MGy at a dose rate of 2360 Gy/h during a severe accident scenario.

In terms of the manufacturing process, metallic conductors penetrate through a metal housing that contains several openings. Sintered glass rings or glass tubing segments are melted around the conductors to provide electrical insulation, enhance mechanical strength and centre the conductors in the openings.

Glasses have a compressive strength 10 to 20 times higher than their tensile strength. This compressive force can be leveraged to improve the feedthrough strength by selecting metals for the housing with a coefficient of thermal expansion that is much higher than the value of the glass and interior conductor. Due to this higher thermal expansion, the metal case shrinks firmly onto the glass during cooling to create a hermetic seal. Compressive load to the glass and conductor take place to such a degree that the metal remains pressed on to the glass even if mechanical pressure is applied or there are major temperature changes.

Glass rims that extend out from the melting opening and increase electrical insulation resistance are not possible with compression seals, because fractures could result from the reduction of force outside the melting zone. For this reason, sintered glass is usually made shorter than the feedthrough and does not end flush with the metal, but finishes slightly inside after cooling.

Schott EPAs have also undergone, and passed, a special equipment qualification test to Institute of Electrical and Electronic Engineers (IEEE) 317-1983 (R2003) – the standard for EPAs in containment structures for nuclear power generating stations.

Glass-to-metal EPAs have many characteristics which can make them a better option than organic seals. First, the lack of thermal and radiological ageing in Schott EPAs gives a virtually unlimited lifetime compared to the combination of heat and radiation ageing of polymer seals, which weakens these seals over time.

Second, the temperature and fire resistance of inorganic materials are extremely high. In Schott EPAs, the hermetic seal is maintained for over four hours at 750°C even during direct exposure to fire. Polymer-based isolators are flame-resistant, but that decays over time with exposure to temperature.

Finally, Schott’s compression seals are insensitive to rapid temperature changes because of the compressive forces acting on the glass isolator, which are maintained until the glass inversion temperature is reached, at approximately 350°C.

Schott EPAs have been installed in PWRs, HTRs, BWRs, and FBRs, including at Biblis, Loviisa, Phillipsburg, Kalkar, and AVR Jülich.

Corrina Thomson is a freelance editor.