Out of the ordinary at Iffezheim

A new turbine is being installed at the Iffezheim hydroelectric plant, with boring being carried out directly within the undercurrent of the sluice. A Grundodrill 25 N from Tracto Technik is playing a key role in this unusual bore project 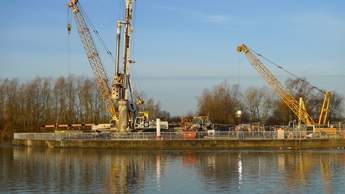 Over the period 2009 until 2012 work is being carried out on the addition of a fifth turbine at the Iffezheim power plant on the Rhine in Germany, making the hydro power plant the largest on the river at almost 150MW. The project is being developed by Rheinkraftwerk Iffezheim GmbH, which is 50/50 owned by Germany’s EnBW and French firm edf. andritz Hydro will supply the new turbine.

As part of the expansion work, WMZ from Wittislingen was awarded a contract by Arge Implenia/Schleith to install five multi-pipe bundles, each over a length of 220m beneath the Rhine, to allow power to be transferred to a substation on the opposite side of the river.

This bore task is not a routine operation for several reasons. The bore area is located directly within the undercurrent of the sluice, and this area is difficult to bore as sand, pebbles and rubble in all grain sizes are apparent and have to be handled safely. There were high demands on the drilling fluid, due to the penetrable structure. There were also numerous metallic objects underground, which originated from the construction of the barrage, sluice and power plant in the 1970’s. This meant that standard detection systems could not be applied due to the busy water traffic and the interferences caused by water terminals. Despite these issues, WMZ completed the bores successfully on schedule.

In addition to the difficulties mentioned above, tight working conditions were also an issue. The pilot bore had to be carried out directly from the landing stage at the waterside. The bore rig had to be set-up on the other side of the Rhine at the sub-station for the expansion and installation process of the 4-fold pipe bundle.

Before the bore process could start, the preliminary work for the starting pits had to be carried out, including securing the pits with sheet piles and installing casing pipes. For this, approximately 30m long steel pipes ND 600 had to be installed with an inclination of 42 degrees using the auger bore method in the installation direction, which were intended to protect the landing stage. It was important to protect the embankments against any blowouts caused by the drilling fluid under pressure. Furthermore a distance of 3m had to be held to the landing stage.

For the pilot bore a Grundodrill 25 N from Tracto-Technik was placed in position diagonally to the landing stage. The undercarriage and the rear stabiliser had just enough space between the bank edge and the starting pit, meaning it would not have been possible to use a larger bore rig. After the starting preparations the drill rods were pushed into the casing pipe.

After a tour through 30m of steel pipe the bore head started to work for the approximate length of 190m into the direction of the substation. The deepest point of the bore path was approximately 8m below the river bed, in total at a depth of 23m. To ensure a reliable detection a separate magnetic field had to be set up. The cables installed for this formed a square, which led from the starting point of the first bore, through the installed pipes, then parallel to the Rhine and over the B 500 on the barrage to the starting point of the following bore.

After the first bore had been accomplished successfully, it could be used as a reference path, which could be converted with the Para-Track-Method to each of the next bores at distances of 10m, parallel to the bore. The intended path and actual path were clearly indicated with symbols for inclinations, depths and lengths on the laptop monitor. The implemented software checks and compares the measuring values and data continuously, which are then transferred via cable by the sonde installed inside the pilot head at the front. These then show the steering orders, which are converted on the bore rig into the required thrust or rotation of the pilot rod. With each added rod the data cable was carefully extended by a further 3m.

For the following expanding processes to 280mm, 360mm and to 580mm bore diameter and the pulling in of the 4-fold pipe bundle, the bore rig had to be transported to the substation on the opposite Rhine embankment and placed in position, as the pre-stretch of the pipes to be installed was only possible on the landing stage. 20m of egelen PE 100 pipes, OD 160mm, SDR 11 in a bundle of four, each with a 220m length, were welded and pulled in together.

Specialists had to get involved with the recipe for the drilling fluid, which had to be tuned optimally to the stabilisation of the bore canal and the reduction of friction during the pulling-in process. Due to the soil structure there were hardly any spoils and the pulling forces only reached approximately 12 tons during the installation of the pipe bundle, which weighed approximately 5 tons. Inside one of the pipes, in a separate installation process, three further protection pipes 50 x 4.4mm for control lines and the cable for the set-up of the magnetic field for the next pilot bore were installed. In the remaining three protection pipes OD 160mm the network operator will pull in cables for the triple-phase transfer line. For the installation itself, the pipe bundle had to be held several metres above the dam with an excavator, to ensure the minimal permissible bending radius of the pipe was not exceeded. The installation itself took only three to four hours.

Under difficult geometrical, ground structure, detection and steering conditions the bore team of four completed the bore task successfully. This was due to a number of factors, including the well-prepared concept, close collaboration with specialists for the drilling fluid, as well as the use of special detection and steering technologies, and the co-operation of the bore team, who applied a reliable bore technology for the precise and technically efficient production of the multi-bore path.