OSV design, efficiency and the environment

Offshore support vessels (OSVs) are the lifeblood of oil production platforms, a role that is set to increase as exploration goes deeper and further afield in the search for hydrocarbon sources. Arnstein Eknes and Bjørn-Johan Vartdal, DNV GL Norway, talk to Shirley Accini about the main considerations of OSV design, and the trade-off between efficiency and industry needs. 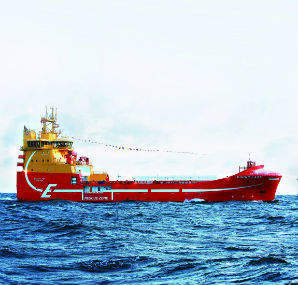 Supplying offshore platforms is a complex challenge that depends on many factors that designers need to consider at the drawing board, and is further complicated by the growing requirement to incorporate a range of efficiencies while satisfying industry demands.

"When oil was initially discovered, production took place first on land and then it moved to shallow waters, so the priorities then for designers of offshore supply vessels (OSVs) were relatively simple," says Arnstein Eknes, segment director, special ships, DNV GL.

The starting point for the designer is the intended purpose of the operation and its location – how far from land (and, therefore, supplies and safety) it is.

"As we go into harsher environments, vessels need to be self-supporting for long periods," says Eknes. "And when more work takes place subsea, the driver for the technology on the surface depends on how deep the areas are. Is this vessel to work on its own or with others? That is key to the robustness of the operation."

While function and cost have always been at the forefront of OSV design, there is now more emphasis on making efficiencies throughout the operation wherever possible.

"A lot of innovation now lies in having different transmission systems improving the total efficiency of the ship, from taking the fuel in to producing energy that can be stored for use later on."

"It’s about finding a good and efficient way of balancing operations," says Eknes. "Once the key functions are defined, designers often discover that the vessel will only be working, say, 50% of the time, so the question is what to do with the other 50%. Should it be idle or should we offer it on the market for the other 50%? So designers will then try to maximise the vessel’s opportunities – for example, by adding more functions – so that it is not restricted in its use."

And this is where the balancing act becomes tricky; while adding more functions will certainly widen a vessel’s range, the more technologies there are, the less time they will be in use, which, according to Eknes, then becomes a challenge for crew efficiency, especially with space a precious commodity.

"There is not enough room on board to have a specialist working on each piece of technology," he says. "Therefore, the crew need to know all the functions thoroughly – but they can’t know everything. Here, internet access and onshore connectivity can help when knowledge is required while at sea."

One of the most popular means of creating on-board efficiencies is through lowering fuel consumption, a key element stemming from calls for the oil and gas industry to reduce its environmental impact, and rising fuel prices – oil has gone from $20 a barrel in the mid-1980s to $100 today. But, as Eknes explains, it’s no longer just a matter of lowering energy demand; operators must also look at how to capture and convert ‘lost’ energy.

"It used to be that the crew and the mortgage of all the equipment units were the most expensive part of offshore operations, but fuel has become a major element," says Eknes. "As costs have increased – although fuel is normally paid for by the charterer – many operators are looking at how they can better use their energy; for example, instead of burning a lot of fuel in the combustion engine, in conditions where the total fuel efficiency is low, a smarter set-up of the system can give significant reductions in fuel consumption. It is partly an economic driver and partly a driver that is sustained through the ecological environment that has developed over the last two decades."

"A lot of the innovation now lies in having different transmission systems improving the total efficiency of the ship, from taking the fuel in to producing valuable energy that can be stored for use later on," Eknes explains. "For example, many OSVs carry out repetitive and transient work like hoisting. Electricity is needed to lift the cargo and to lower it, but if you have it properly tuned, you can regenerate that electricity by reversing the system and storing the energy in a battery, like in hybrid cars."

"The ship can operate on the battery and fuel cell alone while in harbour and during some operating conditions, which provides significant fuel savings."

By focusing on fuel efficiencies, designers can also look at reducing the environmental impact with new and more reliable technologies, and shifting from using just heavy oil to also using diesel and LNG. While they make the systems more efficient, and in doing so gain a business advantage, they also have a better environmental and societal impact.

"The environmental and efficiency aspects are working together and supporting each other," says Eknes.

One example of where DNV GL has been working to provide environmental and operational efficiencies is the Viking Lady, part of the FellowSHIP research project and funded by the Research Council of Norway. The aim of the project was to test the commercial viability of using a fuel-cell power pack capable of reducing carbon dioxide emissions by up to 50% and improving energy efficiency by up to 30% compared with conventional power generators.

Viking Lady is a working vessel, owned by Eidesvik Offshore and chartered by Total, and the FellowSHIP team have been carrying out their tests while the ship has been in operation, giving them a unique insight into how the systems work.

"One of the benefits of the fuel cell is that you don’t have the transmission losses that you would normally have with a combustion process," says Eknes. "It has a much cleaner transfer from energy source to electricity production."

The 92m vessel is powered by four Wärtsilä 32DF dual-fuel (diesel-electric/LNG) engines and has been in operation for more than 20,000 hours since its introduction in 2009. The project has now entered its last phase, which involves testing a recently installed 500kW/h energy-storage battery to complement the 320kW/h fuel cell’s power, giving the engine a more optimal and cost-effective operation while further reducing emissions.

"The ship can operate on the battery and fuel cell alone while in harbour and during some operating conditions, which reduces energy consumption and provides significant fuel savings," says project manager Bjørn-Johan Vartdal. "All we need to do is run a sea trial to quantify the effect of this new system."

While shipowners have shown interest in this new system, adds Vartdal, most are awaiting the outcome of this final test before they decide to go ahead with installing it on their ships. One issue will be cost, as such a new system will undoubtedly demand a sizable capital investment.

"The payback time for Viking Lady is about two years, which is very good, but owners will have to make sure that the battery type and size are optimised for their ships," he explains. "The pack itself is relatively new and not mass-produced, so the cost is quite high. But manufacturers think that, by 2020, the price could be a third of what it is today and the payback time will be proportional to that."

For both Vartdal and Eknes, a major highlight of the project has been proving to the industry that efficiencies can be made during a vessel’s operation, and, from this, DNV has been able to produce class rules, crucial for safely introducing the system for commercial use.

"Once we have finished the project, we will have the figures to prove the benefits," says Vartdal. "Based on that, we may see a lot of owners looking to build this type of system – Viking Lady has proved that it is beneficial for OSVs."