How a new multidisciplinary approach to design links together the tools used in every aspect of wind farm and wind turbine design, making it possible to explore the various interrelated alternatives simultaneously, and leads iteratively towards a solution that optimises profitability. 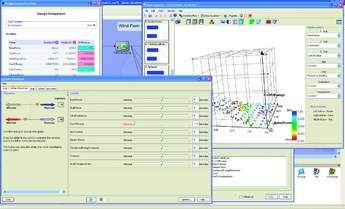 Wind energy has the potential to make a major contribution towards solving the world’s energy problems, but faces significant obstacles in improving its efficiency to the point where it can compete with fossil fuels. More mature industries including the fossil fuel firing power generation industry have spent many decades evaluating different design alternatives and relentlessly focusing on those that provide the best economic performance. But wind energy has not yet had the time to climb this far up the learning curve. A key problem is that designers charged with the major aspects of wind turbine design – site, tower, blade, generator, etc – move towards their own goals but do not usually have the information or tools to consider the impact of their choices on other important objectives.

A new approach called multidisciplinary design and optimisation (MDAO) links together the tools used in every aspect of wind farm and wind turbine design to explore all of the various interrelated alternatives and iterate towards a design that optimises profitability. MDAO can be used to develop a high level view of the complete wind farm design by considering each of the major systems as a black box. It can also be used to address detailed design issues by incorporating high fidelity computer aided design (CAD) of the entire wind farm and turbine, or whatever parts that it makes sense to model. This approach can help the wind energy industry quickly catch up by rapidly evaluating huge numbers of possible design alternatives.

Making up for lost time

The first modern, automatic wind turbine, developed in 1888 by Charles F. Brush in Cleveland, USA, had a full load capacity of

12 kW and was used to charge batteries. However the technology was slow to gain serious commercial attention. In the United States there were limited applications for powering rural homesteads not connected to the grid, but these mostly ended with the growth of government sponsored rural electrification in the 1930s. During the 1950s there was some research carried out in Denmark that led to the 3-bladed model that is the predecessor of the modern Danish turbine, but the modern wind turbine industry finally got off the ground in the 1970s as a result of the 1973 oil crisis, which led to a search for alternative means of energy production. Nonetheless the development of the industry moved slowly for some decades, with worldwide installed capacity taking until 2005 to reach

More recently, the growth rate of installed capacity has increased substantially, resuting in a total nearly 30 GW installed in 2008, but this rapid growth has limited the time available for designs to be optimised by traditional engineering methods. What is needed is an approach to design that will enable wind farm and turbine designers to rapidly assess huge numbers of possible alternatives, helping to compress the time required before wind energy can compete economically with carbon-based power generation.

The ideal wind farm design is dictated by a combination of technology and economics. The goals are usually to maximise energy production, minimise capital and operating costs, and comply with the constraints imposed by the site. There are many different, often conflicting, disciplines involved in the site design process. The wind farm is typically laid out by considering various site sizes, site layouts, turbine types and hub heights. Spacing of wind turbines on the site must be considered carefully to avoid unacceptably high wake losses. The optimum layout for the site and the optimum turbine design are interrelated and affect each other.

Similarly, wind turbine designers have the goal of delivering electricity at the lowest possible cost per kWh of energy. Wind turbine blades have many similarities to helicopter rotorcraft blades and share many of their design characteristics. Taller towers increase wind turbine energy production but cost more to build, so this trade-off must be optimised during the design process. The determination of the aerofoil (airfoil) shape, and number of blades, involves questions of aerodynamic efficiency, component costs, system reliability and aesthetics that in turn impact the site design. A smaller generator requires less force to turn it, which makes it more efficient at low wind speeds, but also less efficient at high wind speeds.

One of the greatest challenges of wind turbine design is that these design decisions and many others act in very complex ways on the overall profitability of the wind farm. Each of these decisions is typically in the hands of specialists that use a variety of rules of thumb and engineering software. Often, design variables overlap into multiple disciplines. In this case, each discipline typically provides a recommendation that is optimised based on its own analysis methods. The usually conflicting recommendations of different disciplines must be traded off against each other. There is usually no way to simultaneously evaluate the impact of the different design variables on the overall profitability of the wind farm nor is there a practical method of searching the entire design space for combinations of design variables that might provide better overall results.

The new MDAO tools address this challenge by linking analysis tools used by all disciplines involved in wind turbine and wind farm design in automated processes that are suitable for analysing large numbers of design alternatives. Once the model is created, it can be automatically executed and data transferred from one application to the next, freeing engineers from the time-consuming and error-prone tasks of manual data conversion and data transfer. MDAO tools provide optimisation routines that greatly reduce the number of analysis runs required to explore a design space and identify the best design alternative. Multidisciplinary optimisation can simultaneously evaluate a large number of designs against a wide range of objectives such as revenues under various wind conditions, initial capital investment and life-cycle costs. This makes it possible to provide an objective answer to the overriding question – which design is best?

A software model has been constructed to demonstrate the benefits of modelling and simulation by applying MDAO to the problem of designing for minimum cost of energy from a potential wind farm. Several steps in the process are illustrated in the screen shots on these pages. Initially the variables have to be identified, such as the desired power output, wind conditions at the particular site, size of the site, cost of the land, cost of various wind

turbine machine configurations, and noise considerations. These variables then define a model which is constructed by linking together mathematical functions representing each of the chosen variables. The functions enable a range of values to be chosen for each input parameter with a resulting output being calculated in each case. The model includes a feedback path allowing optimisation to be accomplished based on a chosen parameter such as, in this case, the cost of generating electricity in terms of dollars per kilowatt-hour.

The model has the capability to consider a set of the selected input variable values at one time and calculate an optimised output for that particular case. Repeated running of the model with various sets of input conditions will result in generating a series of trade-offs which will together form a data base to support engineering decisions. The data can be presented in various ways. For instance, a two dimensional graph of cost has been shown in Figure 2. The minimum point on each curve represents the lowest cost of energy. Further, the particular set of input values which resulted in that lowest cost result defines the characteristics of the wind farm. The model has thus produced answers to the starting point questions such as – number of wind turbines required, how large each machine needs to be, and the capital cost. The screen shots shown in Figures 1–6 illustrate the steps in that process.

This type of analysis would typically be performed as part of the site feasibility study. Later, the fidelity of the optimisation process could be increased to optimise the wind turbine design at a more detailed level. MDAO makes it possible to move fidelity forward in the design process, enabling site planners and wind turbine designers to make better choices among alternative design concepts at a point in the process when many critical and irreversible design decisions are made. Moving fidelity forward also reduces product development time and expense by enabling the concept design and detailed design phases to largely be conducted simultaneously.

The example shows how MDAO integrates every aspect of wind farm and turbine design by integrating any or all of the applications used in the design process. It can improve the profitability of wind farms by enabling trade-off QUERY studies that can be used at every stage of the design and engineering process to make better trade-offs between the many conflicting objectives that are involved in wind farm and wind turbine design.