ContinueLearn More X
Home » Analysis » One step forward, one step back, in Germany

One step forward, one step back, in Germany 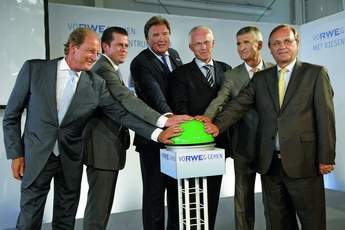 The new facility, which uses scrubbing technology being developed by RWE with Linde and BASF, is designed to be able to capture up to 300 kg/h of carbon from a flue gas stream taken from the lignite fuelled BoA1.

Early operational results have been positive.

Less positive was the failure in June of Germany’s proposed CCS law to be passed, meaning it will have to wait until after the September election. The law would have provided a legal basis for carbon dioxide capture and storage.

A statement provided to Modern Power Systems by RWE said:

“We consider it very regrettable that a workable CCS law was unable to be passed within this legislative period in Germany (which ends on 27 September 2009).

RWE shares the view that CCS is an important technology in the battle to combat climate change, as it offers so many benefits.

Our climate would be one benefactor of CCS, for up to 90% of the emissions typically generated by a power plant would not enter the atmosphere.

The industry would also benefit, since our iron and steel industries, cement works, chemical plants and refineries all need CCS in the medium term to help them reduce their CO2 emissions.

In addition, the developers of CCS systems and power plants have the potential to turn this technology into an export hit.

For all these reasons, a legal basis for CCS needs to be put in place as quickly as possible.”