On the Plus side 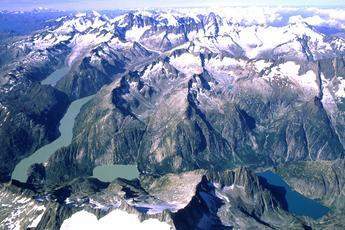 Hydro remains the backbone of Swiss power generation. Even after the modern expansion of nuclear power, today almost 60% of demand is still covered by hydroelectricity. Kraftwerke Oberhasli (KWO) is one of Switzerland’s leading hydro-based suppliers, generating 2300GWh/yr – 6% of Swiss hydro production and 3.5% of national electricity output. The 80 year-old group is part way through ‘KWO Plus,’ an ambitious SFr1.2B (US$921.6M) investment programme launched in 1999 to increase power plant capacity and exploit the region’s hydro resources more efficiently. But the Innertkirchen-based firm faces strong resistance to the cornerstone of KWO Plus, the renovation and raising of its two dams at Grimselsee, or Lake Grimsel.

This year marks the centenary of hydro production in Switzerland’s Oberhasli region near Berne. The upper watershed of the Aar provides ideal natural conditions for the generation of hydro power – abundant water, immense natural valleys for water storage, solid granite cliffs and a 1700m fall from the Oberaarsee down to Innertkirchen. KWO’s constellation of power plants, seven hydro dams, a natural lake and around 130km of water carrying pipes was provisionally completed only in 1979. Nine plants convert the 700Mm3/yr inflow from the firm’s catchment in the Grimsel and Susten valleys: KWO stores 200Mm3 water for use in the energy intensive winter months. KWO’s total 1100MW capacity is the equivalent of a large nuclear plant.

Two of the five separate projects within KWO Plus – modernisation of the Innertkirchen 1 and Grimsel 1 plants, built in the 1940s and ’50s respectively – are due for completion later this year. These will provide an extra 60MW capacity and 75GWh power – equivalent to the consumption of 20,000 households. Additional turbines and other improvements at the 700MW Innertkirchen 1 and Handeck 2 plants will deliver another 220MW capacity later this decade.

KWO’s plans for the two dams at Lake Grimsel are the only element that will impact visibly on the local environment. It has applied to the Bern Water and Energy Department (WEA) to raise the height of the Spittellamm and Seeuferegg dams by 23m, thus increasing the lake’s storage capacity from 95Mm3 to 170Mm3. The 114m high Spittellamm dam will also be repaired – SFr70M (US$53.8M) of the SFr210M (US$161.3M) funding for this phase is for restoration of the 75 year-old structure.

Frost damage and cracking of the dam’s concrete blocks had already required running repairs within two years of construction, and again in the late 1930s. This stopped leakages, but high injection pressure of the additional concrete itself caused further damage within the wall. Changing water levels against the dam have also gradually worked the crown and flanking walls loose from the main structure. Measurements show a steady shift of 1-2mm each year, making a major overhaul unavoidable. KWO plan to entirely remove and replace the top 26m of the existing dam.

Moorlands and part of a famous pine forest will be among the 0.87km2 (1% of the Aar valley) lost to the project. A mountain pass road will be rerouted along a dramatic 400m long cable-stayed bridge 60m above the lake.

The expansion would allow KWO to adjust output better to match summer/winter demand in Switzerland. The region around Lake Grimsel holds the most water in the country – but 90% of rain falls in the four summer months, while well over half the plant’s output is needed in winter. At present KWO can only store 25% of natural inflows for later use. With increased capacity at Grimsel, it could shift 250GWh to meet winter consumption, and add 20GWh to total output. Power plants along the Aar valley could also be deployed more efficiently. ‘This is by far the most important component of KWO Plus,’ argues project engineer Max Ursin.

KWO’s plans have had a mixed reception in various regional parliaments, but WEA is expected to make a final ruling later this year. Environmental lobbies such as WWF Schweiz, Pro Natura and Greenpeace Schweiz oppose KWO’s application, and other suppliers’ plans to increase hydro-peak capacities elsewhere in the Swiss mountains. They claim the economic basis for this phase of KWO Plus is a short-term attempt to profit from peak-load
electricity prices. The use of nuclear or thermal energy to pump water to the Oberaar lake also undercuts KWO’s environmental case. The plant’s pumps use 200MkWh more energy than is generated by turbining the same water – around 25% of the power generated with the natural flow of the two lakes.

An alliance of environmental groups plan to mount a legal challenge to the Federal council’s lifting of protected status for part of the area KWO wants to flood – a change only possible for issues of major national importance. Critics deny that the extra output won by KWO from higher water levels is crucial for secure energy supplies. They also predict winter water transfers will further impact on the river Aar, which rises in the great Aar glaciers west of Grimsel Pass and flows down to Lake Brienz. KWO exploitation already causes short-term variations in the river’s flow.

Demands for a new working party to reconsider the current proposals ‘are a non-starter,’ according to KWO President Peter Schmid. He even disputes opponents’ description of this phase of KWO Plus as one of Switzerland’s biggest pumped storage projects for many years. For Schmid, it is rather a necessary change to the original flawed design, put off for over 70 years, which will match Lake Grimsel’s hydro potential to natural inflows.

He also insists current proposals are ‘very different’ from Grimsel West, the controversial bid launched in 1987 to quadruple the lake’s capacity. Grimsel West was finally withdrawn in 1994 after huge environmental protests. Schmid points to the environmental gains from boosting hydro at the expense of coal or gas-fired plants, and to an expanded Grimsel’s vital role in flood-protection for Swiss valley communities. KWO has also agreed to drop plans for a reservoir in the Susten valley if the expansion of Lake Grimsel wins approval.

KWO also argues that raising the dam walls is not connected to any plans to expand the existing Grimsel 2 pump storage plant on the Oberaarsee. At present only a maximum 3Mm3/day is transferred between the two lakes – any bid to expand Grimsel 2 would require raised water levels on the smaller Oberaarsee rather than Grimsel. Nor will water need to be pumped into Lake Grimsel to maintain higher water levels – 80 years of rainfall figures prove that natural inflows will comfortably cover the planned 170Mm3 capacity. Raising the dam walls by 23m was itself a compromise, as the lake inflows would allow for a further 4m increase.

This is the third attempt over 70 years to expand the capacity of Lake Grimsel. In the mid 1930s KWO chose instead to develop other reservoirs, while a proposal to heighten the Grimsel dam in 1964 was dropped in favour of a new thermal plant. This time KWO insist Grimsel is the most efficient place to focus increased capacity. Alternative generating capacity is set to decline over the next two decades, as many aging coal-fired and nuclear plants come off stream.

With potential new large-scale hydro power sites in Switzerland all but exhausted, KWO insists optimisation of existing capacity is the best way forward. The Swiss hydro sector can also profit from Europe’s growing need for balancing power as wind and other renewables win a larger market share.

However KWO suffered a setback with the publication of research by the Centre for Energy Policy and Economics (CEPE) that suggested hydro projects such as Grimsel ‘are unlikely to be profitable’ for decades. The CEPE study – funded by KWO and its main shareholder Berner Kraftwerker (BKW) – warned of unfavourable long-term power price trends, and also said current high returns had already prompted extensive Alpine investments in pumped storage in both Switzerland and Austria.

There are already a dozen such projects planned or underway in the Tyrol. Swiss regional supplier NOK plans to invest Sfr650M (US$499M) in a new pumped storage plant between the Muttsee and Limmernsee in north-east Switzerland. Lengthy planning procedures mean the 1080MW plant will not come on stream before 2015. NOK expect increased baseload output prompted by higher use of wind power across the EU will improve future
profitability of such pumped storage power stations. BKW spokesman Antonio Sommavilla insists that long-term electricity price trends are hard to predict, and that CEPE’s projections ‘depend on many different elements that are often open to interpretation.’

A study funded by the Swiss Energy Ministry (BFE) urges much greater support for small hydro and other renewables. The report says there are no remaining sites for major Swiss hydro projects, and that renewables offer the best option to replace declining nuclear output after 2020. The BFE wants this segment to increase its share of electricity generation from the current 3% to at least 10% by 2035.

KWO insists that CEPE’s own calculations prove the project will benefit Switzerland economically, and that it ignores key issues such as supply security and regional benefits. Earlier this year leading Swiss utility Atel also urged the government to back new projects such as KWO Plus or face possible energy shortages. ‘In 20 years 30% of current capacity will have fallen away,’ says ATEL CEO Giovanni Leonardi. Without urgent investments Switzerland would depend on power imports to cover the capacity shortfall, equal to 25TWh, or output from five nuclear plants – and even this risky strategy would need major investments in cross border networks.

KWO can also point to the project’s wider economic contribution. The Oberhasli faces many of the problems associated with Europe’s mountain regions – migration of qualified workers, high taxes, an aging population and stagnant economy. KWO Plus awards most of its contracts to local firms, and the expanded plant would add to the regional pool of professional jobs that are not dependant on the strength of the economy. A joint working group, set up by KWO and the regional council in May 2005, aims to develop KWO Plus as a building block for regional growth. The city councils of Basle, Berne and Zurich each have a one-sixth stake in the firm.

KWO Director Gianni Biasiutti has warned that if the ‘genuine compromise’ over Lake Grimsel is rebuffed, ‘we will have to refocus our priorities onto cutting costs to produce cheaper power.’ He has urged the region’s ‘silent majority’ to oppose threats by environmental groups to maroon the project in Switzerland’s legal system for years.

Project engineer Max Ursin says KWO ‘wants to move forward in small steps, not huge bounds.’ He underlines that each stage of KWO Plus has its own technical and economic basis, and does not commit the firm to subsequent investments. The final parts of KWO Plus – at present only ‘a vision,’ insists Ursin – could involve development of a 400MW pumped storage plant (Grimsel 3) and a third 700MW plant at Innertkirchen. Such ambitious projects, together costing over SFr1B (US$768M), are unlikely to leave the drawing board if this latest attempt to expand Grimsel is blocked.