The oil industry recovers a surprisingly small percentage of in-place reserves. Rod James hears from Val Brock at the Shell Technology Centre to find out about the latest approaches to enhanced oil recovery (EOR) and how they can contribute to a rebalanced world energy mix. 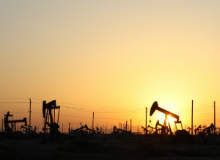 It is difficult to deny that the age of cheap oil is coming to an end. Up to this point in history, around a trillion barrels have been extracted, mainly from conventional fields. Such easily accessible reserves, brought to the surface through primary or secondary recovery methods, are depleting at an alarming rate. At current demand levels the amount of oil on stream today could drop by two thirds by the year 2030, according to the International Energy Agency (IEA).

The cost-per-barrel of extraction is rising as well. Whereas conventional production costs up to $40 a barrel at current prices, deepwater can cost as much as $60, Arctic reserves as much as $120. It is against this background that enhanced oil recovery (EOR) techniques have risen to prominence.

"Up to this point in history, around a trillion barrels of oil have been extracted, mainly from conventional fields."

The industry recovers on average only a third of oil present in the field. Between 5% and 15% is extracted at the primary stage, when the well is left to its own volition, rising to 35-45% during the secondary phase, when external energy is added to increase pressure. According to Val Brock, manager IOR and EOR at Shell, speaking at the company’s technology centre in Rijswijk, the Netherlands, this is where enhanced oil recovery comes into play.

"Normal fields are depleting," he says. "If we can use EOR to move the bar by just 1%, it is enough to supply the world at current rates for the next three years. This is a real carrot, and we are aiming for a 5-20% increase."

The concept of EOR has been around as long as the oil industry itself. Shell became aware of its benefits in the 1930s, applying steam injection techniques at some of its California prospects. Technology progressed steadily for the next few decades before a period of low oil prices in the 1980s caused development to halt. Today, there are a number of techniques being employed around the world, with billions of dollars going into the development of new ones.

"At one well in the Middle East we were able to reduce the residual saturation of oil by 13 percentage points through low-salinity water flooding."

"To go after EOR barrels, you have to think about the nature of the project," Brock says. "It comes down to the complexity of the reservoir, how layered it is and how many faults or fractures there are that might inhibit production. We want full EOR tooling. Rather than focusing on one particular technology, we want the right thing for the reservoir."

Which method to employ depends, to a great extent, on what is preventing the oil from escaping. Oil and water don’t mix well, and crude clings stubbornly to the rock when a flood of water comes through to try and eject it. Sometimes the oil is very viscous, to the point of being semi-solid. Geology can also pose significant problems.

"We often inject into a well and try to push the oil through to an adjacent producing well," Brock explains. "The nature of the rock configuration doesn’t always allow that. There are also a lot of layers building up, all with different properties. So when you push water through horizontally, it breaks through one layer and bypasses the oil."

In cases where oil sticks to the rock face, a number of sophisticated enhanced water flooding techniques are being employed. One of the most interesting is low-salinity water flooding, which neutralises the effect of salt in the well.

"Oil and the rock face tend to be negatively charged, but salt in the water tends to be positive," Brock explains. "So salt grabs the rock face and the oil, and makes them stick together. We can inject a low-salt mixture to change the equilibrium and loosen the oil. At one well in the Middle East we were able to reduce the residual saturation of oil by 13 percentage points through the adoption of this process."

Alkali surfactant polymer flooding (ASP) is another area that is growing in popularity. It aims to massively reduce the interfacial tension between trapped oil and the injection fluid. Last year, Shell extended a production-sharing contract with Malaysia’s PETRONAS that includes a range of EOR operations, including the first attempts at offshore ASP, by 40 years.

"We’ve had nine single-well ASP trials over the past two years at six different reservoirs. We are now ready to take this into worldwide implementation."

"This is based on the same principle of water and oil not mixing," Brock explains. "You inject an alkali, which mixes with the acids in the ground to create a petroleum soap. The chemistry might not be quite right, so we add a surfactant. You now have an emulsion, which will flow through the pores of the rock. To make this flow, we inject a polymer. We’ve had nine single-well trials over the past two years at six different reservoirs. We are now ready to take this into worldwide implementation."

The chemical cocktail employed in this process is partly lost in the reservoir, partly produced back. Shell’s R&D team is currently searching for ways in which the emulsion can be recycled and reseparated to reduce waste. It ties in with what Brock frequently says about the entire value chain being integral to successful EOR.

"To be able to make what occurs underground happen, we need facilities on the surface, whether it’s to manage and generate steam or to prepare and pipe around chemical cocktails," he explains. "What are some of the technologies being used downstream that we can bring upstream? How do we move technologies out of the laboratory to the field? It’s an integrated approach."

The extremely heavy crude types, such as those especially prevalent in Canada’s Athabasca oil sands, will require a lot of ingenuity across the value chain. With heavier crudes almost twice as prevalent as light, it is vital to global supply that these resources can be maximised. Steam injection, a well-established EOR concept, would normally be used to melt the oil and make it less viscous. The complexity of many of the more promising heavy oil reserves means that this isn’t always possible.

"In the 50s and 60s you’d inject steam into the injection well, it would form a steam chest, reduce the oil viscosity and produce from an adjacent well," Brock says. "If that’s not possible, another technique you can use today is called cyclic steam simulation, or ‘huff and puff’. You inject the steam, let it soak for a while and then produce it back in the same well. You could also use air. You inject it, ignite it and the in-situ combustion process will create heat and mobilise the oil. There are some very innovative technologies coming to the fore."

"Surveillance technology allows companies to make a much more accurate judgement of what can be recovered and whether it is worth going after."

Some of the key advancements have nothing to do with the actual processes. Surveillance technology has developed impressively in the past decade, allowing companies to make a much more accurate judgement of what can be recovered and whether it is worth going after.

"A thermal engineer will always refer to the steam-oil ratio," says Brock. "It could be that a third to a quarter of the energy you recover is used in the initial process. It’s one of the reasons why simulation and prediction is so important. If you are making a multibillion-dollar investment, you need to know what is going in and what will come out. Developments in this area have been essential in terms of employing EOR. Fibre optics, advanced aerial imaging – they really help us see what’s happening in the well."

Oil alone will not be enough to meet global energy demand. Even if it were, environmental obligations mean that a mix of gas, renewables and nuclear is the only viable long-term solution. But in a climate of unpredictable oil prices and political volatility, EOR can make a significant contribution.