In the context of stagnating oil prices and competition from more flexible markets, the UK’s North Sea oil has long been seen as a difficult area. But with new projects on the horizon, could the region be bouncing back – and are the UK Government’s new tax incentives finally bearing fruit? Oliver Hotham speaks to François Austin, energy practice leader at Oliver Wyman, about where UK energy in the North Sea can go from here. 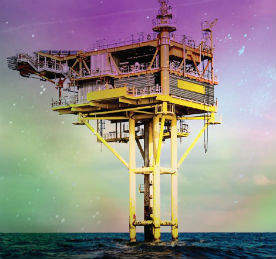 It’s usually not a good thing when an official report classifies a market as standing on "the edge of a chasm" but, in February, that’s exactly how an activity survey and report by trade body Oil & Gas UK described the North Sea oil industry.

"Thirty years ago, the province was producing more than double the current rate from around a quarter of the number of fields and, on average, discoveries were five times their current size," the report said. "Over the past year, the number of fields expected to cease production between 2015 and 2020 has risen by a fifth to over 100."

"While the industry’s decades of experience provide great depths of knowledge and expertise that can be applied to recover the still-significant remaining resource," chief executive of Oil & Gas UK Deirdre Michie added, "the report highlights the challenges that the falling oil price poses in our capability to maximise economic recovery of the UK’s offshore oil and gas."

For those working in North Sea oil and gas, the past few years have not been the easiest of rides. Since 1983, when the industry contributed a substantial 10.0% to the British economy, it fell to below 2.8% in 2014, and Oil & Gas UK estimates that around 120,000 jobs have been lost in the region in just two years.

With Brent Crude seemingly stuck below $40 a barrel, things aren’t looking likely to get better any time soon. It’s a slump that’s affected oil and gas across the world, from Saudi Arabia to Texas, but also one that, for a number of reasons, has hit North Sea oil particularly hard.

"It’s a very mature basin," says François Austin, energy practice leader for consulting firm Oliver Wyman. "A lot of its assets are nearing end of life, so many would be starting to think about potentially running these assets down and decommissioning.

"Now, if it was $80 or $90 a barrel, you could carry on running them for longer, but $40 kind of accelerates the pace at which you start thinking about looking to shut down your assets.

It’s also important to remember, Austin points out, that there’s a marked contrast between how the UK Continental Shelf and the Norwegian Continental Shelf are managed and developed. While, of course, the Scandinavian side generally njoys larger assets and more significant resources, there are also key managerial differences. Is this something the UK could learn from?

"On one level, it’s too late because their model was all very sensible," believes Austin. "You’ve got four or five big fields, and you’ve got a certain number of assets producing in those big fields. It’s a well-designed, well-thought-through infrastructure."

"The UK Continental Shelf was developed earlier and in a much more entrepreneurial fashion, with people putting assets down and building their own pipelines – you don’t have that nice organised infrastructural network here."

Austin points to the decision in March by ConocoPhillips to close the Lincolnshire gas pipeline – a move set to shut down 10% of the UK’s capacity and affect several major oil fields – as indicative of the kind of domino effect that’s affecting the region as a whole: as more operators become convinced that the North Sea isn’t a worthwhile investment, others get spooked.

Originally, Conoco had envisaged shutting down some assets and pipelines over a ten or even 20-year period, but with the low price of Brent crude, the process has been dramatically accelerated, and key infrastructure is being undermined.

"There’s general doom and gloom around pricing, and the economic viability of assets and the reserves," Austin explains. "The other doom and gloom concerns the nature of the infrastructure that we’ve got: the problem is that that pipeline is connected to BP assets and all [other] sorts of assets."

However, a few plucky investors and engineers could be helping to reverse this trend, while it’s also easy to forget amid the dire predictions from trade bodies that there’s still a huge amount of potential in the region. Austin points to Total’s programme in the north Shetlands as a case in point.

"There is still new investment that’s being made in certain new assets," he says, "and I think people are going to continue to review their portfolio of opportunities, and judge whether they want to be putting money in parts of the North Sea or west Africa, for example.

"We’ll continue to see new investment, but it’s more the case of how we address these older assets in the mature fields that effectively have interdependency as a result of the infrastructure."

One of the key projects is Maersk Oil’s development of the Culzean gas field, one of the most significant discoveries in the North Sea in recent years. Announced two years ago, the move bucked a trend in a region where oil companies, it seemed, were increasingly pulling the plug.

"Culzean is a key growth project for Maersk Oil, but can also be an important new resource for the UK in terms of its potential to support energy security and employment," said Martin Rune Pedersen, Maersk UK’s managing director, after the annoncement.

"We also hope and expect that these new facilities will not only support production of the Culzean discovery but also serve as a hub for a new development cluster in the surrounding region. In this way, the development can play its part in maximising recovery from the UK Continental Shelf."

Many attribute the new business to the UK Government’s extensive network of tax incentives designed to bring investment and, critically, jobs back to the North Sea. As of March’s budget, effective rates on older fields have been cut from 80 to 75%, while on newer projects, it has been cut from 60 to 50%. It’s a move the industry lobbied hard for – and one that could go a long way to reviving UK oil and gas.

It’s important not to lose sight of the fact that there’s a great deal of value locked in the North Sea, according to Austin, but the question going forward will be how oil companies can collaborate, working together to create teams and develop shared back-office infrastructure – all of which will go into reducing unit cost in a way that makes it all commercially viable.

The issue will be whether the government is willing to help them – "There are legislative challenges and tax challenges associated with that," Austin says.

The North Sea also has an edge over competitors in that unlike, say, the Middle East, there’s enormous appetite for investment in renewables. A significant wind programme already exists, for example, and creating a diverse energy environment will be critical to building a competitive market.

There is a national view that could help, but it’s going to require industry players to let go of some of the control. The question is how we find a way of collaborating that’s quite different.

"A lot of the skills that the folks working on the rigs in the offshore industry have are very applicable to the renewables industry," says Austin. "From an industry and government perspective, how do we set up schemes that are going to enable us to take those skills, and deploy them in ways that are going to get people gainfully employed and be good for the UK economy?"

This will require a change in the way the industry thinks about the North Sea – "National government thinking rather than individual plc thinking," as Austin puts it. It’s something that industry bodies are already keen to work with the government on, but the approach will need to speed up, and companies may have to accept changes to traditional ways of conducting business.

"There is a national view that could help," he says, "but it’s going to require industry players to let go of some of the control. The question is how we find a way of collaborating that’s quite different.

"If I were to predict where it might go, it’s that I think we’ll see some collaboration of the tier-two players out of pure necessity."

It’s safe to say that oil and gas companies in the North Sea are not the only ones suffering, and low oil prices combined with complex economic factors mean that times are tough for even the healthiest markets. But the region’s difficulties also provide plenty of scope for new opportunities and for companies to embrace new ways of doing business, particularly if the UK Government gets on board to aid the recovery. Whether they’ll be successful, of course, remains to be seen.