Marine Current Turbines has taken a major step forward in the development of tidal stream energy conversion generation systems with the consent to install its 1.2 MW SeaGen commercial prototype in the Strangford Narrows of Northern Ireland 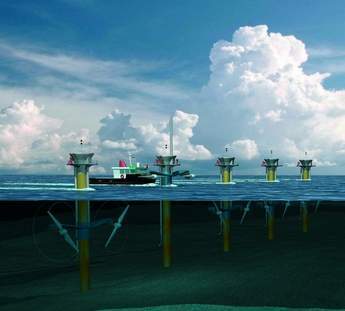 With consent from the Environment and Heritage Service of Northern Island to install its 1.2 MW commercial prototype tidal stream generator in the Strangford Narrows, Northern Ireland, Marine Current Turbines Ltd (MCT) received, in late December last year, a major boost to its progress.

MCT is unique in having designed and installed the world’s first truly offshore wet renewable system, in the form of Seaflow, a 300 kW (rated) axial flow tidal turbine installed in 25 m depth of water 1.1 km off Foreland Point in Devon in May 2003. Seaflow has performed well, in that it has demonstrated that it can exceed its rated power, and the rotor efficiency turned out to be marginally better than expected. Although, as with any prototype system, numerous bugs had to be dealt with, it has survived three winters without any significant failures. All maintenance has successfully been completed using nothing but RIBs (rigid inflatable boats) or small low cost workboats for access, while the system can be operated and monitored remotely from the company’s office in Bristol. This bodes well for MCT’s technology, suggesting that it can be operated and maintained at relatively low cost. Seaflow’s total cost was £2.4 million, which was financed by consortium partners, the Department of Trade and Industry and the European Commission. In a clear vote of confidence in the technology, the planning consent was followed by a decision from EDF Energy (Electricité de France’s UK subsidiary) to add to its earlier equity investment in MCT by taking a stake in the NI project and also by buying a licence for a full scale project in UK waters following testing of the megawatt-scaled prototype. The value of these additional investments in MCT’s technology is £2 million.

MCT has now completed the design and placed key orders for components for the commercial SeaGen system which, in the NI Strangford site, will be rated at 1.2 MW. The target date for installation is the end of August 2006. This project will be significant as being almost certainly the first wet renewable system to actually achieve 1 MW and also the world’s first example of potentially commercial technology in this field to be deployed. The scale of the system is important because economic analysis suggests that offshore systems, of any kind (wind, wave or tidal stream) need to be on a large scale to cover the significant installation and connection overheads; in this case a system of over a megawatt rated power is required for economic viability.

MCT has been working closely with DNV (Det Norsk Veritas – a leading marine certification agency) to gain type approval and validation of their design process for SeaGen, a move judged to be important not only to gain the confidence of insurers but also of the eventual end-users.

Seaflow was Phase 1 of MCT’s R&D programme, and SeaGen is Phase 2. The overall project cost for SeaGen (including design overheads) will be approximately £8.5 million of which the Department of Trade and Industry is financing 50% and MCT’s investors, including EDF Energy, the balance. Some work has already started on Phase 3, which will involve deployment of arrays of SeaGen type turbines as semi-commercial projects where revenue from sales of electricity will play an increasing role in the finance. Each array of about 10 machines is planned for installation starting in 2007, with completion in 2008.

In parallel with Phase 3, demonstration projects will be organised in other regions of the world. The intention is to develop those projects into full scale revenue-earning multi-turbine installations. Subsequently MCT plans to license the technology, participate in projects and collect royalties on the sale of electricity to develop a reliable revenue stream.