The new Gatun spillway will provide flood protection and regulation to prepare the Panama Canal infrastructure for extreme events. MWH Global has been working to help maximise the effectiveness of the spillway and ensure the integrity and viability of this important ship canal. 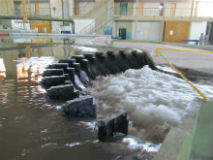 One of the largest and most challenging engineering projects ever undertaken, the Panama Canal is an 80km ship canal that connects the Atlantic and Pacific Oceans and creates a passage which represents 5% of international trade. The first attempts to build it date back to 1881 but was not actually completed until the effort undertaken by the US between 1904-14. Construction of the canal no longer made it necessary for ships to sail the lengthy route around the southernmost tip of South America and today, some 14,000 ships annually pass through this Central American shortcut. Work is now underway to expand the canal, including a new set of locks that will allow much larger ships to pass through the waterway.
The Panama Canal works via a system of locks with entrance and exit gates. It relies on Gatun Lake, a manmade fresh water lake that was created by the construction of the Gatun dam across the Chagres River to make it navigable by large vessels and serves as a reservoir to operate the canal locks. Gatun Lake, which presently has a maximum operating level of 26.67masl and spans 436km2, is part of the canal’s shipping channel, serves to generate hydropower, and is a water source for communities established adjacent to the waterway both in Panama City and Colon. Its dam and spillway structures also provide critical flood protection for the canal and surrounding region.
In particular, the Gatun spillway is the primary hydraulic outlet from Gatun Lake to the Chagres River. Its purpose is to control the lake level, meet the water supply and navigation demands and to protect Gatun dam, the Gatun and Pedro Miguel Locks and other facilities around the lake shoreline from flooding. The spillway was designed a century ago at a time when little information was available detailing the hydrology and hydraulics of the Chagres River. Based on this limited information, the spillway was designed, constructed and placed into operation in 1913 with a capacity calculated from historical flood elevations along the river and a maximum operational lake level of 25.91m. As demands for water increased, along with the number of vessels transiting the Panama Canal, the maximum operating level was raised to 26.67m.

Engineering firm MWH Global is the lead technical designer for the concurrent expansion of Panama Canal through a third set of locks, which will require a planned increase in maximum operating level of Gatun Lake. Due to this increase, there will be less storage available during floods, leading to increased peak discharge from the spillway during seasonal rainfall events.
This has placed greater importance on the need for a new spillway. After almost 100 years of operation a significant amount of hydrologic data has been collected for both the Chagres River and the climatology of the region. This compilation of data, when combined with the advancements in hydrologic design criteria and standards for dams and spillways, has led to a consensus that the current spillway capacity has to be upgraded to safely handle the probable maximum flood (PMF). International standards classify the Gatun dam as a large dam with a high hazard, and as such, the spillway must be re-designed to meet its associated PMF levels.
The need for a new spillway was identified very soon after the opening of the Panama Canal. This resulted in the development of several hydrologic studies on the Panama Canal Watershed and even a new spillway design as early as 1945. While new studies and designs were later developed, on 8 December 2010 the Panama Canal experienced the largest storm in its history, which forced the use of the lock culverts to control unprecedented Gatun Lake flood levels. This further accentuated the need for a new spillway, and led the Panama Canal Authority to decide on the award of a contract for a detailed design of a new spillway for Gatun Lake.

To help increase the outflow capacity of the existing spillway system and ensure that it can handle the PMF, the Panama Canal Authority (ACP) awarded a US$4.4M contract to MWH Global in January 2012 to provide preliminary and final design services for a new spillway. In short, MWH engineers are addressing the varying water levels and spillage needs of Gatun Lake, alongside all the protection works related to the extreme spilling conditions.
MWH evaluated the existing Gatun spillway which consists of a curvilinear concrete dam measuring 225m along the top, with a crest at 5.7m below the present normal lake level. The spillway was designed so that water converged at the bottom of the dam from opposite directions, hitting baffle blocks to dissipate energy and exiting through a concrete discharge channel. The spillway dam is controlled by 14 Stoney gates supported by concrete piers, and has a capacity of 5155m3/sec at the current maximum operational lake level.
As part of the contract, MWH has been tasked with identifying at least three plausible flood management solutions and developing corresponding conceptual designs, each including a new spillway and cost analysis. The preliminary design phase was to determine the best way to increase outflow including adding new spillway structures and has entailed:
– Research and analysis: MWH conducted a review and analysis of available background information from ACP, including data and reports conducted throughout the history of the Gatun spillway.
– Site investigation and field works: A site investigation campaign was developed, including the location and number of new boring sets and seismic lines based on proposed structure location and alignment. Field works were also developed and new information was reviewed in combination with new information to determine design parameters for structural foundations. These included:

– Modelling: A number of mathematical models and simulations were developed to test the design before fully implemented. Utilising data: Data from the various studies and models as listed above. Several alternatives were developed, evaluated and proposed, including the arrangement of the spilling structures, dissipation units, approach channels, and feasible flood management solutions. However, prior to submitting the proposals to the ACP, MWH conducted complete modelling to ensure the feasibility of each solution. The testing included:

– Physical modelling: In addition, a 1:40 scale model of the existing Gatun spillway was constructed at the Hydraulic Laboratory of the National Institute of Water (INA) in Buenos Aires, Argentina. It reproduces a section of the dam, the existing spillway, the dissipation area with baffle blocks, the discharge channel and a short stretch of the river downstream. It was applied to verify the rating curves, and to evaluate the performance of the spillway in several scenarios, including higher tail water levels corresponding to prospective future operational situations.
– Structural and mechanical analysis: For the three design alternatives, structural stability analysis was performed on the new spilling structures using finite element and rigid body analysis. Seismic design guidelines were also considered. Dimensions of the structures have been set, along with the design of mechanical equipment including tainter gates, actuating mechanisms, an emergency closure device and maintenance stoplogs.
– Environmental assessment: A preliminary environmental feasibility assessment to meet regulations in Panama was also prepared for every alternative.
MWH has presented several preliminary design alternatives, along with cost analysis, to the Panama Canal Authority for their review. ACP has recently selected the conceptual design alternative, and MWH will finalise the design and develop bid documents and drawings for construction. The design capacity of the new spillway structure is close to 7000m3/sec at the highest lake flood level. The project is slated for completion in 2013.

The new Gatun spillway will provide flood protection and regulation of Gatun Lake to prepare the Panama Canal infrastructure for extreme events. Maximising the effectiveness of the spillway will also ensure the integrity and viability of the Panama Canal, not only for the existing locks but for the third set of locks that will be designed with water saving basins – saving 60% of the fresh water which would otherwise be used in the locks. These advancements come at a time when Panama, much like other countries worldwide, is eager to conserve its water resources while increasing the amount of economic trade and transportation that can pass through its waterways.

Fernando Re is a civil engineer for MWH Global based in Buenos Aires, Argentina.