Enriched uranium, the lifeblood of nuclear power generation, has been in the mainstream news recently because of issues such as security. However, perhaps the bigger story is the slow pace of conversion of research reactors and the use of highly enriched uranium to low enriched uranium as Thecla Fabian reports. 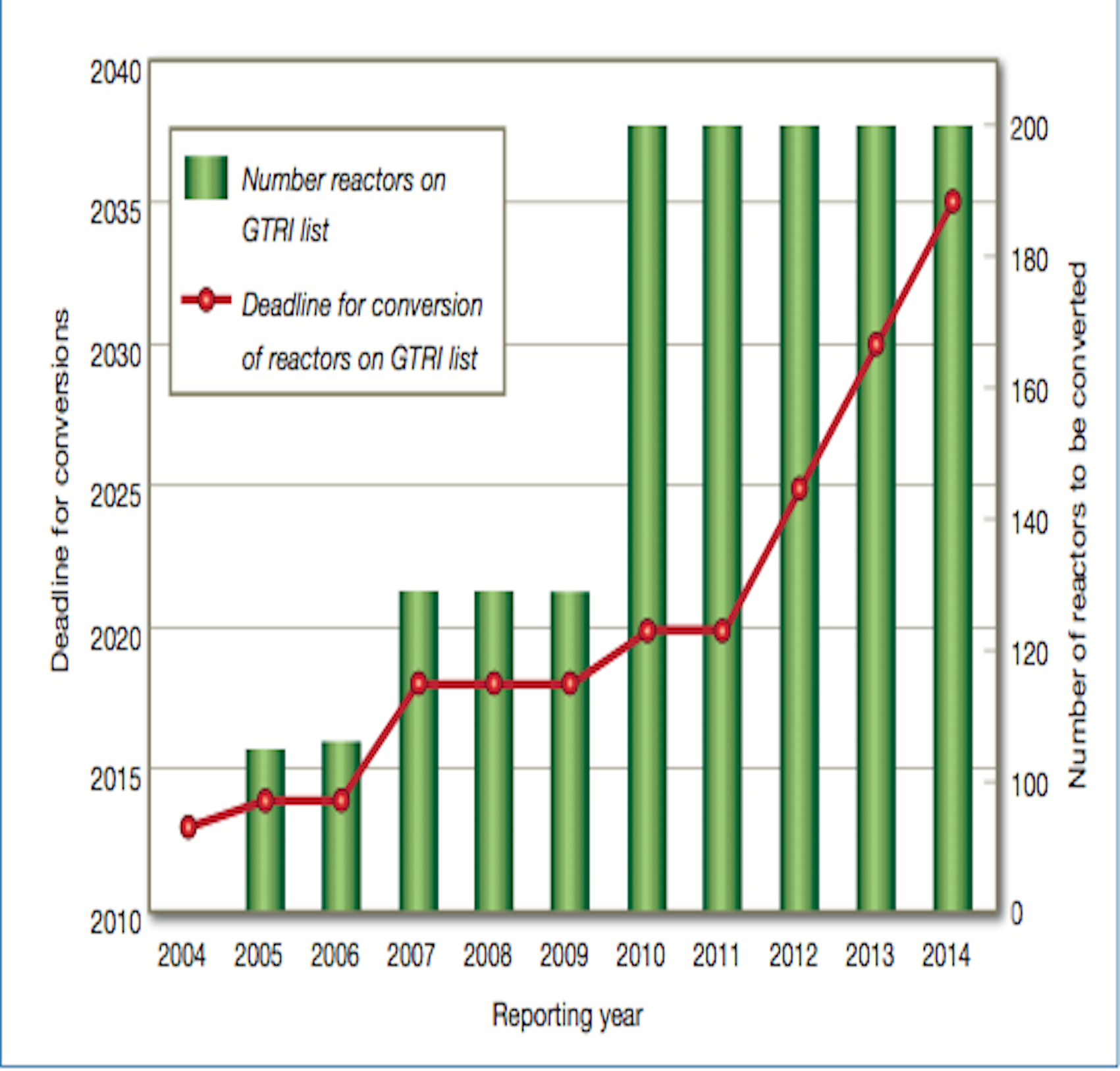 For almost 40 years, US policy has been to urge the conversion of research reactors worldwide from the use of highly enriched uranium (HEU) to low enriched uranium (LEU) fuel as a way of preventing proliferation or diversion of weapons-useable material. Yet these conversions have proved much more difficult than originally expected, a new review by the US National Academies of Sciences, Engineering, and Medicine (NAS) has found. Today, 74 civilian research reactors, including eight in the US, still use or plan to use HEU fuel.

The new NAS report, mandated by Congress under the 2012 American Medical Isotopes Act, found that LEU fuels or other mechanisms for producing neutrons with similar spectra and flux levels using the current generation of research reactors simply do not exist. The NAS report, ‘Reducing the Use of Highly Enriched Uranium in Civilian Research Reactors’, stressed these reactors perform crucial roles in education, basic scientific research, medical isotope production and other fields.

Many of these reactors, including all the high-performance research reactors (HPRR) operating in the US, are 50-60 years old, and reaching the end of their useful lives – but replacements are not even in the planning stages. The youngest US HPRR is more
than 45-years-old. Given the ages of these reactors and the evolving need for neutrons the missions of these reactors have evolved over the years. They have been upgraded and modified to meet changing user needs and an expanded user base.

The situation in Europe is quite different. There, the youngest HPRRs are just over 12 years old and new research reactors are under construction or in the planning stages. As a result, European countries are developing and executing a strategy for ensuring the continued availability of HPRRs to meet their future needs.

The US has found conversion of the remaining ageing research reactors, both in the domestically and abroad, to be significantly more difficult than it envisioned in the 1980s. It is now estimated that another 20 years will be needed to convert the remaining US HPRRs to LEU fuel. Conversion is expected in the 2030s, around the same time most of these reactors will be due for relicensing.

Because of the coincidence of relicensing, conversion and ageing issues of a fleet of reactors averaging 65 years old, ‘it is reasonable to compare the benefit of converting/retrofitting the current fleet of USHPRRs against designing and building new research reactors that use LEU fuel and address the critical missions the current reactors support’, the NAS report said.

The report adds that the US Department of Energy (DoE) has performed such a report, but that DoE has authority over only half of the current US HPRR fleet. DoE’s analysis focused only on its own research reactors, mainly those used for advanced nuclear energy research. The NAS report says the US Office of Science and Technology Policy (OSTP) has the authority to review all US research reactors and the variety of missions that they support, but has not yet done so.

NAS recommended that OSTP take the lead in developing a 50-year interagency strategy that enumerates and evaluates the importance of expected US civilian needs for neutrons. OSTP would provide a roadmap for how these needs can best be met by both reactors and other sources, such as accelerators, that do not use HEU.

What are the obstacles?

Elimination of HEU from civilian research reactors faces both technical and non- technical obstacles. Most of the technical obstacles relate to developing and qualifying very-high-density fuel based on a uranium- molybdenum (UMo) alloy. It is now estimated the design, production, qualification and use of such fuel will take 15-20 years for US research reactors, resulting in nearly an additional 20 years of reliance on HEU fuel.

The UMo fuel being developed in the US faces greater uncertainty and more technical risks than the LEU fuel now being developed in Europe and South Korea. The US fuel design faces many more manufacturing challenges before it can be qualified.

A consortium of European countries, South Korea and Russia are pursuing separate efforts to develop high-density LEU dispersion fuel. The new fuel, also a UMo alloy, is similar to existing, qualified fuels. However, the US-designed fuel will require fabrication methods qualitatively different from those for existing fuel.

The fuels under development overseas might be suitable for some US HPRRs, but not all of them the NAS said. It recommended the US continue work on its ultra-high-density monolithic fuel, which work in all US HPRRs if it can be qualified. However, the NAS report said the South Korean fuel might be able to speed up the conversion of some of the lower power density US HPRRs if development of the US fuel is further delayed.

The expense of new fuels

The economics of the new ultra-high density LEU fuel is ‘highly uncertain and a source of significant concern’ to research reactor operators worldwide, NAS said. The report pointed out that not enough is known about the final manufacturing processes, particularly for the US monolithic fuel, to estimate fuel costs. Under some conditions the cost of high-density LEU fuel could become prohibitive for some reactors.

The last US reactor to be converted to LEU fuel was in 2009, NAS said. Based on rough approximations by the technical committee that produced the report, NAS said all but one of the HPRRs in the US and Europe probably could be converted using existing, qualified LEU silicide fuel at enrichments of 45% or less with significant impact to the missions that they support. European HPRRs have performed calculations to support the feasibility of this, but US reactors have not.

The NAS report recommended that to achieve the goal of decreasing HEU use as much as possible during the years it will take to develop and qualify ultra-high- density UMo LEU fuel, US research reactors should investigate the interim possibility of using dispersion silicide fuel enriched to the lowest practical level, which can be produced with technologies already known to be reliable. The US should downblend the remaining 20 metric tonnes of HEU designated for civilian research reactor use.

Some countries, Russia in particular, face non-technical obstacles to conversion of HPRRs to LEU fuel. Despite considerable reductions in the number of civilian research reactors fuelled by HEU since 2009, Russia still has more than 40% of the world’s HEU- fuelled research reactors. Many are critical and subcritical assemblies, which can pose particular risk because the fuel is lightly irradiated and there can be large amounts of fuel stored on site. NAS acknowledged the number of these types of reactors has significantly decreased during the past few years.

Fuel conversion not a priority in Russia

However, Russia remains very interested in exporting its nuclear technology, including LEU fuel and radioisotopes. The NAS suggests that the US may be able to leverage this Russian priority to continue bilateral efforts on HEU minimisation. However, it also notes that, given current international relations in general, and US-Russian relations in particular, the US and the international community have very little influence on Russia’s prioritisation of its domestic civilian research reactor conversions.

NAS recommended the US should encourage and facilitate periodic meetings and workshops that engage US and Russian scientists and engineers to continue scientific exchanges and interactions ‘that formed the basis for previous progress in HEU minimisation’.

The US recently dissolved its Global Threat Reduction Initiative (GTRI) and its Convert Programme, replacing it with the Office of Material Management and Minimization (M3) and its Office of Conversion. The new Office of Conversion is focused on overcoming the significant technical challenges associated with converting HPRRs, as well as completing the conversion of the remaining HEU-fueled reactors worldwide.

The need for better conversion metrics

The programme currently reports annual progress by counting the number of reactors using HEU that have either converted or shut down. However, NAS said this metric does not fully convey progress toward minimising and eliminating the use of HEU for three reasons: the definition of a converted reactor is one in which at least one LEU fuel element has been inserted, even if some HEU remains in the reactor; reporting the number of reactors converted or shut down does not measure how much HEU fuel is in place at the reactor sites, and whether the HEU is in the core or in storage as used fuel; and the largest fraction of HEU annual consumption is made by a small number of reactors. No metric provides data on the reduction of the annual consumption of HEU in civilian research reactors overall.

NAS recommended the Office of Conversion’s annual progress reports also should include:

The technical setbacks and increasing times for conversion of US HPRRs emphasises the need to develop a robust project management strategy and regular technical and programmatic evaluations, NAS concluded. It noted the M3 Office of Conversion has established review teams to guide programme management decisions. These review teams focus on strategic review, cost, and fuel development.