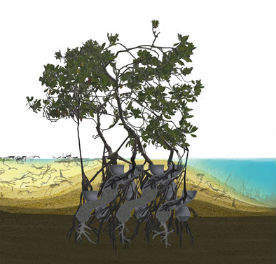 The increasing problem of sea level rise represents one of the most flagrant consequences of the global climate change. As the Intergovernmental Panel on Climate Change (IPCC) reported in September 2013, due to global warming sea level will have increased by 100cm by 2100. This prediction forecasts the submersion of some 5M km2 of the lowest lands on earth, which is twenty times the area of the UK, causing massive migration and serious economic damages.

Hence, in 2013, France’s Jacques Rougerie Foundation’s international architecture competition called for proposals in three categories of which one was "Architecture and Sea Level Rise". Here they welcomed architectural concepts reflecting on this environmental issue. More than 500 entries were received from 76 countries of the world. The jury awarded the first prize in the mentioned category to CALTROPe.

CALTROPe’s main goal was to propose a future-oriented and innovative architectural solution responding to a problem due to sea level rise: the reduction in area of tropical and subtropical delta regions that are socially, economically, and ecologically vital for our planet. To get the core concept clear, firstly the significance of the targeted area and its dynamics and ecological processes were observed.

"At present, 24 out of the 33 largest deltas are sinking and losing land; as confirmed by a 2009 study in Nature Geoscience"

Deltas are incessantly built and evolved by sand and gravel river sedimentation pushing always a bit forward the estuaries in the sea. Owing to this sedimentation process deltas conquer substantial areas from the seas every year. The largest tropical deltas on Earth can measure tens of thousands of square kilometers. However, by today, human activity significantly transformed the natural run and hydrodynamics of our planet’s huge rivers by dikes controlling their flow, and bigger and bigger dams and reservoirs disturbing water yield. These interventions hinder transport and resupply of alluvium as well as its accumulation and integration into deltas. In addition, agronomy and industry take away important amounts of water, so most rivers lose substantial water capacity by the point they reach their estuaries. As a result of all these reasons, at present times, 24 out of the 33 largest deltas are sinking and losing land; as confirmed by a 2009 study in Nature Geoscience. Building is giving way to erosion, and expansion to decline. Seas are also reclaiming the deltas, which will be further accelerated by sea level rise.

Since ca. 500M people live in deltas (equals to the population of the European Union and to 8% of all humanity on earth), for whom these zones mean home, life and living. Sea level rise just in itself leads to disastrous consequences but the situation will be exacerbated by the eventual destruction of more and more intense storms and sweeping hurricanes also ascribable to global warming. Thus vast areas of living spaces and agricultural lands may disappear or at least be endangered shortly. Moreover, we have to expect the collapse of the complex estuarine ecosystems. The tropical and subtropical countries with these dense population tend to have weak economies and are the most vulnerable to these threats. The prospective soar of uninhabitable zones foreshadows a modern age mass migration. Hence we focus on the deltas of these regions.

The importance of mangrove forests

Mangrove forests grow in tropical and subtropical foreshore habitats. Mangrove swamps are composed of 40-60 species in about 20 genera and in more than 10 families. This plant association forms different coastal zones, the composition depending on the degree of salinity and water coverage.

Endemic plant species adapted to the waving and the tidal fluctuations of the littoral swamp by evolving a special profuse strong lateral root system for better foothold (Figure 1). Water is so poor in oxygen that it cannot supply the plant with this substance. Thus the immense root system obtains oxygen from the air via negative geotropic (growing upward) pneumatophores, ie breathing roots.

By developing an abundant root network while growing, trapping alluvium from the river and the waves, these trees create the grounds of their own habitat as they contribute to soil formation and prevent neap tide backwash from eroding the coast. Thanks to these properties, mangal is the only natural plant association on earth that helps land gain areas from the sea (Figure 2). Beside the protection against constant effects, mangrove provides shelter against extreme weather events. It absorbs 75%t of wave energy, so the mangal-entrenched land is relatively protected against storms and tornadoes.

Despite its importance, mangal had become one of the most endangered tropical ecosystems on earth by the millennium. Sadly, the original coverage has diminished by more than 35%. In addition to direct human intervention (deforestation), indirectly prevailing processes are also reducing the coverage. Because of sea level rise and the reduced amount of influent alluvium, the mangrove zone situated between the tidal and mean sea levels is moving up following the new coastline. Consequently, by the seaside, those trees that are permanently under water die, letting devastating waves to rage; while landside, the mangrove is climbing with high tide on land occupying the habitat abandoned by land plant associations (Figure 3).

After the examination of the dynamics, the flow characteristics, and the ecological regularities of deltas, it was concluded that the intentional and increased retention of water-borne alluvium carried in big quantities by delta rivers can be the key for the protection against the effects of water level rise. Therefore our aim was to elaborate a straining system that is able to catch alluvium and integrate mangroves into an architectural structure in an organic and controlled way. It was essential to design such modules that initiate positive changes in a symbiotic way with local endowments on the critical coastlines.

The CALTROPe module system is to be installed between the delta’s branches and on the foreshore, following the sedimentation patterns. The lace is to be built in one or two to three levels and the height of the system is defined by the mean water depth on the shore. Mangrove saplings are to be planted in the flared hollow arms of the top level. In time, the trees’ roots will enmesh other units as well, creating a live sifter layer on the constructed one. The prefabricated modular system serves essentially as a supportive frame and helps the trees take root and grow strong where the water would be too high otherwise. On the foreshore, the special mangal needs (water depth, salinity, etc.) are artificially established under water on the CALTROPe lace. The structure ensures appropriate life conditions for the plant even in water several metres deep. That way, the intricate root system and the human-built construction form together a natural dam that retains alluvium and adds it to the shoreline soil (Figure 4).

The system consists of numerous examples of one single element type. The units can be combined both horizontally and vertically. Modularity allows adjustment not only to the conditions at the time when the lace is installed but also to evolving circumstances. This feature is crucial respecting the protean dynamism of delta geography, especially if one takes into account how little we know about climatic changes and their potential impact on sea level. The units serve at the same time as a framework, as incubators for the planted saplings, and as a flow-decelerating wall contributing to wave protection and sedimentation.

The modules’ blend is a special mixture of concrete developed for this purpose, always containing local materials. In 15-20 years, as the plants get stronger, the concrete lace starts crumbling and decomposing. Eventually, the crumbs also become parts of the alluvium and integrate into the sediment.

The installation of the CALTROPe lace consists of a gradual development process of several steps. Four to five years after planting, the saplings grow strong enough to be self-supporting, preserve soil and strain water. Sedimentary processes start immediately and keep on banking up alluvium incessantly. The lace always curves and forms closed lines to enhance alluvium capturing and structural stability (Figure 5).

These areas do not only function as a dam, a filter or a pier, but CALTROPe’s "watery esplanades" also provide habitat for other organisms that creates the possibility for local population to earn a viable and sustainable living. The presence of the lace and the care for the flora can prove to be useful in several ways for the locals. The participatory factor brings people together and reorganises the community. Collaboration improves the community’s sense for self-supporting, constructive management strategies that utilise local resources.

Protecting land against an inevitable rise in sea level

Sea level rise has become an inevitable and unpreventable fact. Yet the installation of the CALTROPe lace could contribute to the articulated and effective utilisation of delta sediment and to the rescue or possibly the slight expansion of existing estuary infields. The retention of a few years’ sediment is already enough for the protection of the coast. We believe that if the installation is well scheduled, the volume of sediment trapped will form sufficiently high dams to save the current lands when the sea level goes beyond the critical point.

The CALTROPe concept was also well received beyond the scope of the competition. Though there is certainly a long way from theory to practice. Firstly there needs to be hydrodynamic and materials testing, and then small-scale mock-ups will be assembled. Hopefully, the core idea will prove correct, that is to say that natural processes catalysed by human intervention can offer a good solution for problems generated by human activity.