Cleanup of a MOX rig will support decommissioning of the Sellafield MOX Plant. By David Checkley and Kieron Ryding 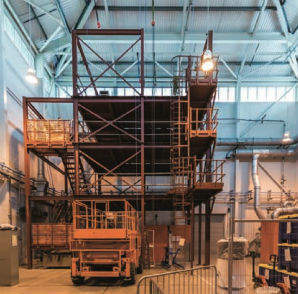 The National Nuclear Laboratory (NNL) in Preston, UK, has capabilities to support nuclear research and development including decommissioning residue cleanup. It specialises in handling uranic residues, with production and development rigs from laboratory to commercial pilot plant scale. Nearly all NNL projects at Preston Laboratory recycle uranic contaminated residues back into the nuclear fuel cycle. Other capabilities include nuclear physics and advanced reactors, fuel design and manufacture, specialist analytical services, and process chemistry and engineering.

In 2011 the UK government announced that the Sellafield MOX Plant (SMP) would be closed. It decided that supporting infrastructure at NNL should be decommissioned ahead of the SMP. These comprised the Uranium Commissioning Facility (UCF tower or MOX rig), a full-scale replica of the powder processing section of the SMP, and powder handling and pellet pressing facilities.

The UCF tower was installed and commissioned by BNFL in 1996 to support the MOX Demonstration Facility (MDF) and later the SMP. It allowed mock-ups, tests and trials to be carried out on active stimulants including UO2, with results transferred to operations at SMP.

The UCF tower has processed mainly depleted or natural uranium with limited enriched operations. Trials were conducted with 90-97% of the actual feed materials, excluding PuO2, and in most cases the UCF behaved the same as the MOX batches in SMP.

The UCF Tower and associated facilities have performed many R&D trials on uranic powders and residues for design and process verification
and supported the development of British and Japanese nuclear fuel plants. In recent years the UCF tower has been supporting SMP operations, conducting SMP plant modifications and performance improvements.

The decommissioning project was separated into two schedules to allow work on the powder handling facilities to commence ahead of the UCF tower post- operative cleanout. It was funded by the Nuclear Decommissioning Authority (NDA) and overseen by Sellafield Limited. NNL Facilities Engineering provided a full work package, including design, installation and decommissioning.

Initial activities included minimising loose contamination, removing fluids and nonessential services to enable temporary decommissioning containment areas to be installed in the limited space. All decommissioning had to be conducted alongside other NNL activities without impeding operations.

The general programme sequence involved the strip-out of nonessential or low- contaminated equipment before commencing the removal of the primary containment glovebox. Finally the secondary containment and supporting steelwork was removed.

During the planning stages assessment trials were conducted to ascertain the most suitable method for processing contaminated equipment and recycling uranium back into the fuel cycle. Trials evaluated the success of various acids and domestic cleaning products, balanced against the requirement for the ease of uranium recovery, material suitability and operator hazard reduction.

In preparation for the process the tower control system was removed so a large posting post could be installed in the secondary containment area to allow equipment to be moved between the tower, buffer storage and decontamination facility.

In the decontamination facility contaminated items from the buffer storage are loaded onto shelves in the transfer area. From this point the operators move the contaminated items via gloveports or windows to either a breakdown or wash decontamination station for processing. Items are then separated: there is clean material for conventional disposal and items requiring further residue recovery.

Among the contaminated items to be cleaned were hundreds of heavily contaminated ball bearings from the powder milling operations. They required individual wiping and then separating into small batches that were submerged in citric acid. This method was insufficient for many of the ball bearings so the process changes included longer leaching periods with agitation.

Each critic acid cycle was followed by water washing, a drying cycle and monitoring to confirm that levels suitable for disposal had been reached. Balls that did not reach the discharge limit were reprocessed until suitable levels were attained.

A large percentage of the materials were cleaned in the wash facility using only water delivered at 40 bar and a range of tools to scrub difficult areas. As with most tasks involved with the decommissioning process, improvements were sought as the project progressed. One significant change involved swapping the wash facility’s water spray nozzle for alternatives with different patterns to match the work.

Contaminated residues from the cleanup were separated at multiple points to enable the uranium content to be recycled back into the nuclear fuel cycle. One residue process developed at the laboratory used industrial washing machines operating with nitric acid to dissolve and remove the uranic contents. This proved invaluable for the cleanup of soft contaminated items.

The main tower vessels were situated between two access floors, which significantly increased the task of the cleanup and also influenced the dismantling process. In order to remove the primary containment glovebox, sections of 50 mm solid steel – the reason why the glove box weighed 10 tonnes – had to be cut. All work removing the glovebox was conducted wearing respiratory protective equipment, in at times very restrictive workspaces. The limited space and construction of the tower meant most items had to be reduced in size and then manually hoisted to different levels in the tower before they could finally enter one of the buffer storage boxes.

Other constraints included tight external access around the UCF tower and decontamination facility, especially when manoeuvring mobile access platforms, for example when removing the tower’s secondary containment and structural steelwork. The structural steelwork was removed without the previous radiological implications.

The main UCF tower vessels have been decontaminated and declassified, ready to be used as decommissioning training rigs. The area occupied by the UCF tower has returned to a routine area and is commencing another active production scale R&D challenge. In the area previously occupied by the powder handling facility is now being transformed into facilities to support the National Nuclear Laboratory’s "Nuclear fuel Centre
of Excellence" programme, leading the next generation of nuclear fuel development.

Decommissioning projects are complex nuclear engineering challenges, requiring sound project management and technical support in strategic areas. Combining all of these elements has been a crucial factor in achieving the project objectives.

The project required a flexible approach to task sequences and methodology to stay on schedule without affecting other site operations. Changes were required during most phases and mitigation planning has minimised local delay to ensure the overall project delivery is to time. Studying the critical path and uncoupling key activities or requirements has provided maximum flexibility to deliver the project schedule while managing project risks. For example, assessing the required decontamination throughput and probable risks identified the need for the buffer storage. This provided the flexibility to stay on schedule while encountering other delays.

The R&D cycle of pilot plant development, optimisation, support and cleanup can add further value to reduce decommissioning costs. Front-end assessment trials helped plan efficiently and reduce long-term waste storage costs. Overall project risks for increased waste storage costs and project timescales were reduced with an environmentally friendly approach of recycling contamination back into the nuclear fuel cycle. Whilst the assessment trials supported conventional solutions, the representative samples were consistent with the majority of decontaminated materials, but some items required decontamination methods not assessed in the initial trials.

SMP is not expected to be decommissioned until around 2037, (depending on NDA funding) so it will require records to be available after most of the experienced personnel have retired. So the information gained on the UCF tower has included recording preferred removal methods and challenges encountered.

3D capture modelling has been used to include a virtual walk-around of the UCF tower. This enables different viewing positions to be taken, as vessels are safely removed from their position. Live video clips and photographs showing conditions and obstacles encountered have been collated
in an electronic library with supporting documentation.

The benefits include providing evidence of contamination hotspots and hold-up areas to support the SMP decommissioning safety case and a library of relevant information to support efficient and timely decommissioning activities. ¦