Morocco takes the lead in the solar hybrid race

Ain Beni Mathar 470 MWe integrated solar combined cycle power plant in eastern Morocco, the first of its kind in the world, has started construction at Oujda. It is partially funded by financing from GHG initiatives. 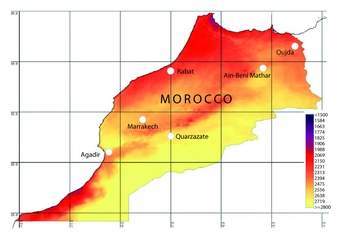 On 28 March King Mohamed VI of Morocco laid the foundation stone of the Ain Beni Mathar thermo-solar power plant. This is the largest of three such plants being constructed in North Africa, and is likely to be the first plant of its kind operating anywhere in the world. It is located

86 km to the southwest of Oujda in eastern Morocco. The ceremony signified the official start of works on the two-phased integrated combined cycle power station which will have an installed capacity of 470 MWe, including 20 MWe from the solar component. It is expected to start operation in simple cycle mode in April 2009, and in combined cycle in April 2010.

The cost of the project is estimated at r400 million, with most of the external financing coming from the African Development Bank which is providing two loans amounting to r187.85 million, of which r36.45 million was approved in March 2005 and r151.40 million in December 2007. Other sources of funding include $43.20 million from the Global Environment Facility (a World Bank–United Nations Development Programme initiative) and a loan of r43 million from the Spanish Development Agency (ICO) and the National Electricity Corporation (Office National de l’Electricité, ONE) Morocco’s major state power utility and the plant’s final owner.

Operating income will be supplemented by credits awarded for CO2 emissions avoided by the solar component, which can be traded under the Kyoto Protocol’s Clean Development Mechanism. Qualification for CDM credits owes a lot to the relatively deep carbon footprint of the Moroccan electric power and heat sector, currently greater than that of the USA by 11%.

In 1999 US$ 50 million from GEF was granted to Morocco for a 250 MW ISCC project with 30-50 MW equivalent solar capacity. A Request for Proposals was prepared with the choice of technology being left to the bidding investors, but after it became evident that investor interest in a merchant independent power project was zero, the outline was changed to a national utility owned project. By August 2004, a good industry response to the new RfP concept had been established, leading to the pre-qualification of four international consortia and in February 2005 bid preparation documents were submitted to the World Bank. Additional financing had already been committed by the African Development Bank. In July 2005, the RfP for the ISCC project at Ain Beni Mathar was sent out to the prequalified bidders by ONE, and in July 2007 the EPC contract was awarded to Spain’s Abener, part of the Abengoa group.

The objectives bound up in the building of the plant include the usual ones of reducing emissions, exploiting an available resource, diversifying energy supplies and helping meet increased demand, but the government of Morocco has two other aims – to attempt to correct the current pattern of imbalance between local supply and demand in the country and, importantly for the future, to master the technology of solar energy.

Abener is currently building a similar ISCC plant in Hassi R’Mel, Algeria (see below) with an installed power capacity of 150 MW; it has a solar field with an equivalent capacity to the Ain Beni Mathar facility, although its combined cycle plant has lower output. Hassi R’Mel is contracted to start commercial operation in 2010. The 135 MWe Kuraymat ISCC in Egypt, with a 20 MW solar component, is also due to start full commercial operation in 2010 (see MPS April 2008 p35).

The r160 million contract to supply equipment to the 470 MW plant has been awarded by Abener and ONE to Alstom, which will supply two 150 MW GT13E2 gas turbines, one 170 MW Comax steam turbine and three Topair air cooled generators, as well as operational support and maintenance for 21 years under a service contract. The generators must be capable of supplying a grid that habitually exhibits ±10% voltage fluctuations. One of the key challenges of ISCC configurations is flexibility, as the plant must be able to perform under varying ambient conditions and changing power input from the solar cycle.

20 MWe will come from energy collected in a 183 000 m² solar field employing Abengoa’s cylindro-parabolic mirror technology. This consists of parallel rows of solar collectors, each collector having a linear parabolic-shaped reflector that focuses the sun’s direct radiation on a linear receiver located along the line of the parabola’s focus.

A heat transfer fluid is heated as it circulates through the receiver and returns to a series of heat exchangers in a power block. Water from the HRSG economiser is passed through the heat exchangers and converted to saturated steam, which is injected into the HRSG superheater.

The HRSG for the GT13E2 will be larger than a typical combined cycle design in order to handle the additional steam from the solar plant. A bypass stack in the exhaust provides for operation in simple cycle. The CC?steam condenser is air-cooled.

The integrated system helps to reduce the capital expenditure of the solar plant, which will share equipment with the combined cycle, says Oscar Mene-Castineiras, GT sales project manager at Alstom. ‘During the day, when combined cycle output drops owing to increasing ambient temperature, the solar plant steps in and compensates for the loss in capacity.’

Mene-Castineiras says that the GT13E2 is the ideal match for the ISCC plant in terms of exhaust energy, providing the best overall plant efficiency. An F class plant would be expected to provide higher capacity and thermal efficiency, but the solar power component brings in financial incentives.

A feature of the GT13E2 is its flexible operation modes. The operator can select how to operate the turbine, optimised either for power or for lifetime. The selection can be made online and without any change in hardware. Selecting power optimisation leads to an ISO rating of 179.9 MW at 36.9 % efficiency, with an outage interval equivalent to the standard 24 000 EOH. The lifetime optimised setting gives an engine ISO rating of 174.6 MW at 36.7% efficiency but at an extended operating, ie maintenance, interval of 36 000 EOH.

The GT13E2 burners are normally divided into two groups – the main and the lean group. The main group takes the load while the lean group fine-tunes the combustion. An ‘advanced pulsation control logic’ feature maintains the optimal gas distribution ratio at varying ambient conditions, gas turbine load and gas composition. APCL measures pulsations in the flame and adjusts the burner group gas distribution ratio so that the flame is stable but not over-rich, thus keeping the NOx levels as low as possible.

Abengoa is also engineering and constructing a smaller ISCC plant at Hassi R’Mel in northern Algeria. This project is being promoted by Solar Power Plant One (SPP1), an Abener and NEAL (New Energy Algeria) joint venture formed for the purpose, and will own and operate the plant for a period of 25 years. The Algerian state electricity company Sonatrach will buy all the power produced. The plant will consist of a nominal 25 MW solar field of parabolic trough collectors providing 20 MW of complementary thermal energy to a 150 MWe combined cycle plant. The solar collecting surface will be over 180 000 m2 and is composed of 216 solar collectors in 54 loops with an inlet heat transfer fluid temperature of 560 ºF and an outlet temperature of 740 ºF. The heat generated will be sent to the same steam turbine that operates from the GT’s heat recovery steam generator, thus increasing its capacity. This configuration has two major benefits. It minimises the investment associated with the solar field by sharing components with the combined cycle system, and it reduces the CO2 emissions associated with a conventional plant.