When it comes to inspection of hydroelectric projects, remotely operated vehicles are often required to work in areas with heavily restricted visibility and manoeuvrability. Here we take a look at how an ROV was used during rehabilitation of a mine, and describe how the work undertaken is applicable to hydro schemes 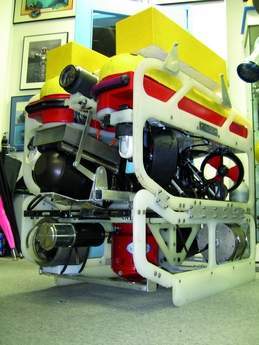 Toronto based Cameco Corporation is one of the world’s largest publicly traded uranium companies operating a number of mines worldwide. It’s Cigar Lake mine in Northern Saskatchewan, Canada, was first identified as a major source of high grade uranium nearly 20 years ago and was due to start production in 2007 after undergoing construction costing in excess of US$600M.

In April 2006, a shaft intended to provide ventilation to the main mine had reached a depth of approximately 396m when the miners hit a high volume ground water layer and a valve on a 2” grout line leading to this water zone failed resulting in the flooding of the mine shaft.

Nuytco Research of North Vancouver, British Columbia, was contracted by Cameco to assist in locating and plugging the broken grout line to allow the shaft to be dewatered and rehabilitated. For the first phase of the operation Nuytco working closely with CKL Engineering of Saskatoon, Project Engineers, employing the use of a small remotely operated vehicle (ROV) to initially inspect the shaft bottom where it was determined a significant amount of sand and silt now covered the open grout pipe. A programme was undertaken to remove the bottom material and further inspect the bottom with a custom built drop camera built by Nuytco. After an extensive dredging operation and bottom survey with the drop camera system, the grout line was located and it was determined there was good access that would allow a nitrogen inflatable packer tube to be inserted leading to the second phase of the operation.

For the second phase Nuytco Research selected and contracted Michigan based SeaView Systems Inc to assist with its Seaeye Falcon DR ROV to aid in the viewing and insertion of the placement of the inflatable packer.

The plugging operation was in progress with both Nuytco and SeaView personnel on location in October 2006, when the main mine suffered a roof cave-in resulting in the mine flooding at a rate of around 15,000 to 20,000 gal/min.

The mine had been designed to contain such an event with the installation of two 4m diameter high-pressure bulkhead doors located within the shaft so that when closed they would isolate the mines ore body area from the mill/production facility area, allowing the mine to flood, but to protect the mill/production assets. During evacuation, one door was closed successfully but the other failed to seal despite efforts on the part of the miners concerned to make it do so. After several attempts, and with frigid water flooding through the door and increasing in volume at an alarming rate, it became apparent that the door was not going to able to be closed in the given time. Reluctantly, the miners, with water at thigh level, took the last 488m elevator ride to the surface loosing the entire mine until such time as the leak could be stopped and the mine dewatered and renovated.

Given the estimated US$19B value of the mine, no time was spared by Cameco in starting on a recovery programme. It decided upon a two pronged approach towards rehabilitation. The main rehabilitation plan was to bring in two land based oil drill rigs which were to drill down to the mine cave in area and pump grout to form a large plug in the mine tunnel. Once set in place and proved to be sealing, the mine would be dewatered on the downstream side so rehabilitation can proceed.

The second approach to rehabilitation was to contract Nuytco Research to provide a robotic option to perform a condition assessment of the mine in the region of the bulkhead door and of the door itself. To support them in this undertaking, Nuytco again contracted SeaView Systems, Inc to provide the Seaeye Falcon DR ROV. Together the two companies took a ‘white paper’ development approach with the only restriction to the problem being the state-of-the-art of applicable underwater technology.

As visibility was expected to be near zero, the need for accurate navigation and the best available real-time remote imaging equipment was identified as being a critical requirement for the successful completion of the project.

Due to the low visibility, it was necessary that a means of navigating the ROV be developed that would not only position the ROV real-time but also provide an expedient means of mapping any debris or obstructions as they were identified in order to minimise the risk of entrapment. To this end, using Hypac software, Jeff Snyder of SeaVision Marine built a virtual 3D model of the mine system based on drawings provided by Cameco. Within this model, Synder placed a model of the Falcon DR and fed the model with position information derived from the CDL Minipos. Using this information, the ROV was to be flown through the virtual space much like a video game, using sonar primarily for obstacle avoidance and tunnel mapping duties. The deliverable product would potentially be an updated 3D model of the mine showing it as it exists now complete with geo-reference features such as implements, tool boxes and other solid debris.

Over a two week period and working on a very tight project timeline, the equipment was assembled at Nuytco’s workshops in North Vancouver, B.C., calibrated and integrated into the Falcon DR.

Once testing was complete, all equipment was shipped up to the Cigar Lake mine where the equipment was mobilised into the main access shaft. Deployment was performed using SeaView’s aluminum deployment cage integrated into the mines existing elevator hoist system.

The mission was to dive the ROV in its deployment cage to 488m, fly straight out 30m, turn right and travel a further 76m recording profiling sonar data all the while. Accomplishing this required that the ROV negotiate past a Bobcat skid steer tractor, a number of cables, pipelines and other infrastructure hanging from the tunnel roof, and finally manoeuvre past a scoop loader (low profiler tractor used in mines) that the miners had been using to try to pull the bulkhead door shut immediately prior to evacuation from the flooding mine. Finally, the ROV was to take a video survey of the bulkhead door which, due to the poor visibility, required that the camera be positioned very close to the door and associated slings.

The Falcon DR was lowered in its cage to the mine drift some 488m below the surface where the INS was given the final position where it would dead reckon throughout the investigation. Visibility at this point was in the order of 0.6m. Leaving the cage, it soon became apparent that the 3D virtual guidance was a great aid to the pilot and lived up to its promise in allowing the mission to be flown in virtual space as the ROV travelled in real space. The navigation and obstacle avoidance was complimented by the three sonars also carried aboard.

Upon arrival at the scoop loader 5m before the bulkhead door, there were some anxious moments as the ROV was manoeuvred blind past the gap between the scoop loader’s cabin and the tunnel roof. Not only was there the concern that if the ROV were not able to get past the scoop that all the effort and development would have been in vain, but also, once past the scoop loader the ROV may not get back out. Perseverance paid off and the ROV made it past the restriction to end the penetration standing directly in front of the bulkhead door. A thorough video investigation showed the dislodged sealing gasket, wire lifting strops still attached to the scoop loader along with other features in the vicinity of the door. After negotiating through such a complicated environment, the vehicle was manoeuvred back to deck to perform post-dive checks.

The most important achievement of this project was the demonstration that a small vehicle fitted with a very dense suite of survey equipment and operated by a suitably qualified operational crew, was capable of reaching the bulkhead door and once there was able to perform work. It is proposed that the same system fitted with appropriate tooling packages be deployed to close the bulkhead door to allow the downstream facility to be dewatered. This would provide Cameco with a fast-track refurbishment option to their main remediation plan which continues on the far side of the door.