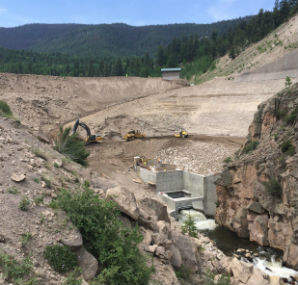 Beaver Park Dam, located just south of South Fork, Colorado, US, has had a long history of seepage problems.  The dam had been modified several times since its initial construction more than 100 years ago. In the spring of 2010, a sinkhole was found on the downstream left abutment where there previously had been seepage concerns.  Colorado Parks and Wildlife (CPW), owner and operator of the large, high-hazard dam, took immediate steps to resolve the problem.

After an initial evaluation, the Colorado State Engineer’s Office (SEO) restricted storage in the reservoir to 20ft below the spillway crest.  An AECOM team conducted a risk analysis to estimate failure probabilities and risks for: 1) the existing facility under normal operation; 2) the existing facility under the restricted operation; and 3) risk reduction alternatives.  The results indicated risks for case 1 that exceeded the guidelines for expedited risk-reduction; risks for case 2 that justified long-term risk reduction action; and risks for case 3 that were generally within the guidelines for decreasing justification for risk-reduction action.  Following the completion of the risk assessment program, AECOM designed the rehabilitation alternatives and performed construction management for the project, which included:

Construction on Phase I, which entailed modifications to the spillway chute to address bedrock erosion concerns at the downstream end of the spillway chute and to raise the spillway crest to increase reservoir storage, met with problems even before it began.  A fire caused by a lightning strike in West Fork brought work to a halt while planning for mobilization was just getting under way.  The town of South Fork, only eight miles from the dam site, was evacuated and the two highways leading west out of town (including the highway to the turnoff to the dam) were closed for more than a month.  Access to the site and working room at the site itself were extremely limited.  The only practical access was on a U.S. Forest Service road that also serves as the auxiliary spillway for the reservoir.  The road was considered two-way but was not adequate for the large loads of equipment and supplies needed for construction.  The contractor was able to devise innovative methods to deploy materials, equipment, and personnel, including working on both ends of the spillway simultaneously when possible.

Grouting the near-vertical, open joints/fractures in the right abutment spillway subgrade and stitching the rock blocks together with rock anchors were necessary to stabilize the rock against erosion and undercutting of the spillway.   Pressure grouting the subgrade using conventional methods proved to be a significant challenge.  Despite the apparent ability to maintain pressure in the boreholes during the grouting process, it was noted that grout levels dropped significantly within a few minutes after removal of the packer and grout tube.  During the grouting process, air was apparently trapped beneath the grout within local wide open joints/fractures of limited lateral extent, inhibiting the flow of grout further into the void space.  Once the hole was depressurized, air trapped in the open joints/fractures escaped upward and allowed the grout to further penetrate the openings (thereby resulting in the dropping of the grout level).

AECOM, CPW and the grouting subcontractor Hayward-Baker developed a modified grouting procedure that ultimately achieved the program’s original objectives. The procedure involved placing the grout by gravity through a tremie pipe extending to the bottom of the stage to be grouted to allow for air to be released from the formation prior to completing a stage.  Stiffer mixes (i.e., lower water: cement ratio) with sand were also utilized.

The second construction phase encompassed construction of a filter and drain system in the left abutment to address internal erosion (i.e., piping) concerns, inserting a new steel liner pipe within the existing outlet conduit, and construction of new intake and outlet structures for the dam outlet works. The work presented a host of challenges to the contractor and design team:

Since there was no way to get into the bottom of the abutment from downstream, the design team confronted a difficult question:  How is the contractor going to excavate all the way down to the bottom of such a steep cut, remove the excavated material, and deliver materials so that the improvements to the downstream outlet works can be constructed, and then deliver five different classes of backfill material while they come back out of the hole?

The contractor, ASI Constructors, expressed similar concerns during the Phase II kickoff meeting.  ASI established a combination of innovative approaches that ultimately worked well.  Excavation of a soil nail wall (designed to limit the upslope extent of required cut and encroachment on Forest Service property) began by working along a cut bench from the top of the wall downslope.  At the same time, a bench was cut lower on the slope from which clearing of at least a portion of the lower abutment slope could be achieved.  Ramps were constructed from both working levels to the crest of the abutment dike and moved as necessary when the upper level progressed downward.  Trackhoes were used for all of the excavation and loaded articulated haul units that had to back onto the benches empty so the haul unit could drive off the cut fully loaded.

Stability of existing rock slopes and rock encountered during excavation in the mid- to lower-left abutment posed serious concerns to the safety of the workers, equipment, and the work that had to be done.  The rock, if disturbed or undercut, posed a risk of large blocks of hard rock toppling into the work area, a phenomenon that had been observed during a prior modification project immediately downstream of the discharge of the existing outlet pipe.  With the warning from several rock-fall incidents and a requirement in the specifications that the contractor address the potential rock-fall hazard, the decision was made to perform rock excavation to match the excavation slope for glacial material.

As the excavation in the left abutment progressed, a piece of drainpipe was found that confirmed that a drainage tunnel described in the archival records was in fact driven into the lower left abutment to collect seepage and convey it out of the abutment.  The subsequent discovery of the drainage tunnel itself came at a time when the new outlet pipe was ready for installation with its concrete encasement threatening to permanently block the portal of the drainage tunnel.  After careful evaluation, it was agreed that the risks and costs inherent in trying to explore further into the old drainage tunnel outweighed the potential benefits.  A plan was developed to muck out sand and organic material that had accumulated in the drainage tunnel, install a slotted PVC pipe into the full open length of the tunnel, backfill the tunnel with filter sand, and then drain gravel around the pipe that was compatible with the pipe drainage slots.

To complete the project, Beaver Park Reservoir had to be lowered for what was essentially the duration of construction.  ASI designed the cofferdam and reservoir drawdown system comprised of an earthen embankment and a 32 cfs pump and conveyance pipe system to intercept inflows on the reservoir side of the cofferdam, discharging them back to the creek downstream of the dam.  The system proved to be effective at bypassing the incoming flows and keeping the reservoir at a safe level.

The existing outlet piping at Beaver Park Dam included a 72-inch cut and cover steel pipe from an inlet structure in the reservoir to a vertical gate shaft through the upstream slope of the dam.  From the gate shaft the pipe diameter was reduced to 48 inches and was installed in a tunnel in rock with concrete backfill between the steel pipe and the tunnel walls.  Some years later, the 48-inch pipe was extended beyond the downstream tunnel portal where the original pipe discharged to Beaver Creek.  The upstream 72-inch pipe was inaccessible due to the absence of a guard gate or bulkhead at the inlet structure.  Portions of the outlet conduit that were to be replaced in Phase II construction with a 42-inch pipe from a new inlet structure to a new outlet structure had not been inspected in more than 50 years.  ASI planned the pipe replacement work based on the best available information and then made modifications during the work as actual conditions were observed.  The downstream section of the pipe was surveyed prior to submitting shop drawings for pipe fabrication, confirming dimensions for installation.

The Beaver Park Dam is located within the Rio Grande National Forest, which is managed by the U.S. Forest Service.  The reservoir and surrounding area is an inviting attraction for outdoor sports enthusiasts, with hiking, fishing, hunting, camping, mountain biking and other outdoor activities readily available throughout the area.  In addition to the fishery within the reservoir, wildlife is abundant including deer, elk, big horn sheep, occasional moose, coyote, fox and mountain lion.  Birds including eagle, hawks, owls and hummingbirds are common and wildflowers bloom in the spring and early summer.

These recreational assets and environmental benefits were given due consideration in the planning and construction of the Beaver Park Dam’s rehabilitation. The amenities that made the reservoir site an appealing destination especially for camping and fishing for both local and out of state visitors were fully restored following construction.

Last September, the Association of State Dam Safety Officials (ASDSO) named the Beaver Park Dam rehabilitation project its “National Rehabilitation Project of the Year.” The project, which was selected over three other highly qualified nominations was recognized for all the innovative design components of this significant dam r e3`ehabilitation.