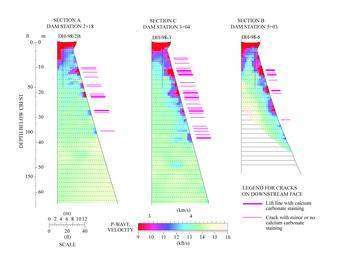 Seismic tomography is a useful tool for assessing concrete quality within large engineered structures. Seismic tomography surveys can image the condition of concrete within a structure, much like medical tomography (such as a CATscan or ultrasound exam) images features within the human body. By sending sound waves through the structure and recording them on the other side, at many locations and across many different angles, images can be produced that show the condition of the concrete within the structure. The United States’ Bureau of Reclamation (USBR) has used seismic tomography surveys to image concrete deterioration with a large arch dam suffering from alkali-aggregate reaction. The results from the tomography surveys are consistent with information obtained from concrete core analyses, fracture mapping, and deformation studies, while providing valuable additional information about strong upstream-downstream variations in concrete quality and localised zones of intense deterioration. In addition, the tomography results were correlated with information from laboratory core analyses to produce cross sections of modulus of elasticity values, providing the only available constraints on this critical parameter away from cored drill holes.

The concrete arch dam under investigation was completed in 1939. It was constructed in ten radial blocks, generally 15.2m wide, using 1.5m lifts. Modified portland cement was used with the following mix ratios by weight: water-to-cement: 0.54, aggregate-to-cement: 9.61, and coarse aggregate-to-sand: 2.4. The aggregate was acquired from the river bed upstream from the dam, and the maximum aggregate size was 15cm. The concrete in the dam was placed during one construction season. The dam has a structural height of 89.9m and crest length of 161.5m. The maximum width at the base is 25.9m, and the face-to-face width at the crest is 6.4m. The minimum width is 5.3m, at approximately 2.4m below the elevation of the crest road. The upstream face is vertical, and the dam is thicker at the abutments than at the crown of the arch.

Evidence of alkali aggregate reaction (AAR) occurring within the dam was first documented in 1951. AAR is a chemical reaction between minerals in the aggregate and the surrounding cement that causes expansion and cracking of the concrete. In this case, subsequent investigations indicate that the AAR occurring within the dam is primarily a chemical reaction between the high-alkali cement and strained quartz within coarse quartzite aggregate. Some chert and glassy volcanics may also contribute to the reaction. This type of AAR is more specifically referred to as alkali-silica reaction (ASR).

Petrographic examinations of cores from holes drilled from the dam crest between 1974 and 1998 show that, over time, the concrete deterioration has become more severe and progressed deeper into the dam. The concrete deterioration seen in the cores is ascribed mainly to AAR, with minor freeze-thaw damage. Results from destructively tested core samples demonstrate that the concrete’s compressive strength and modulus of elasticity have progressively decreased with time. Between 1980 and 1998, the average measurement of compressive strength decreased 23%, while the average measured modulus of elasticity decreased 16%. The average compressive strength measured on core samples taken in 1998 from the upper 15.2m of the dam is 58% of the projected ultimate concrete strength and the average modulus of elasticity is only 38% of the projected ultimate value. It has also been noted that while the degree of deterioration and strength loss decrease with depth, the rate of deterioration between 1980 and 1998 increases with depth.

Visual evidence of concrete deterioration on the surface of the dam includes cracking, spalling and calcium carbonate deposits (staining). Locations of major cracks and stained lift lines on the downstream face were mapped from photographs taken during the late 1990’s. This mapping shows that cracking occurs over approximately the upper 100 vertical feet (30.5m) of the downstream face. The cracks are mainly horizontal across the center portion of the dam, with steeper cracks occurring near each abutment.

Seismic ray paths (the path the seismic energy travels from source to receiver) ranging from horizontal to approximately 70°-from-horizontal were obtained through most of each cross section. Receiver spacings on the upstream face were 61cm, while those across the dam crest were 61 to 76cm. Source spacings ranged from 61 to 91cm. The larger spacing was used for the lowest section of the dam, where less spatial resolution was needed. Multiple depth positions of the hydrophone string were used to acquire data to the bottom of the reservoir on cross sections A and C. Data were acquired to a lesser depth on section B because the right abutment projects into the reservoir at that location. Data quality was extremely good, with excellent signal-to-noise ratio on most seismic traces and typical corner frequencies of 2 to 4 kHz. Nearly 2400 high-quality waveforms were obtained for section B, while 5600 to 5700 good waveforms were acquired for each of the two deeper sections, A and C.

The P-wave velocity tomograms for the three cross sections are very similar. All cross sections show very large velocity variations, ranging from as much as 4.7km/sec, a value representative of strong competent concrete, to less than 2.1km/sec. (For comparison, the P-wave velocity in soils is typically 1.5 to 1.8km/sec). The lowest velocities occur in the upper 30 to 40 feet (9.1 to 12.2m) of the dam, as well as along the upper 30.5 to 33.5m of the downstream face. The areas with the lowest P-wave velocities are interpreted as regions with the most severely deteriorated concrete.

The pattern of P-wave velocity variations seen in the tomograms is consistent with other observations relating to the relative degree of concrete deterioration within the dam. Petrographic analysis and destructive testing of concrete cores consistently show that the degree of alkali aggregate reaction and corresponding decrease in material strength are most severe in the uppermost section of the dam and lessen with depth. An elevation survey of the dam crest indicates that the downstream side of the dam has expanded more than the upstream side, suggesting that more severe or more extensive alkali-aggregate reaction has occurred within the downstream section of the dam than the upstream section. The above observations are consistent with the general pattern of relatively low P-wave velocities in the uppermost section of the dam and along the upper downstream face.

Many of the distinct zones with low P-wave velocities along the downstream face of the dam correlate with mapped fractures and calcium-carbonate-stained lift lines. Fracturing alone is extremely unlikely to cause the low P-wave velocities seen along the downstream dam face in the three tomography cross sections. Although the locations of these low-velocity zones correlate strongly with mapped fractures on the downstream face, the low P-wave velocities are interpreted to indicate that extensive alkali aggregate reaction is occurring in these areas. Cracking on the downstream face may have begun because of stresses, freeze-thaw effects, or expansion caused by initial alkali aggregate reaction. Cracking creates additional concrete surfaces that are exposed to air, water, and temperature variations, which may accelerate the alkali aggregate reaction. Expansion caused by the chemical reaction leads to additional fracturing, and the cycle continues, causing the concrete deterioration to worsen and spread.

A low-velocity layer projecting into the dam from the downstream face between approximately 9.1 to 12.2m depth , most distinctive on sections A and C, correlates with a layer of decreased material strength measured from core samples taken during the 1998 drilling programme. Measurements of compressive strength, modulus of elasticity, and density of core samples from the three boreholes near the tomography cross sections show decreased values at the same depths as this low-velocity layer. In addition, the concrete cores recovered from two of the boreholes are described as intensely fractured within this zone, and fractures were also noted in borehole image surveys at these depths within these two boreholes. The velocity tomograms indicate that the concrete within this layer is most severely deteriorated on the downstream face (where the velocities are the lowest), and that the degree of deterioration decreases in the upstream direction (into the dam). This pattern suggests that the alkali aggregate reaction within this layer began on the downstream face, where the concrete is exposed, and is progressing into the dam. Distinct low-velocity zones along the downstream face at greater depths are interpreted to represent similar patterns of deterioration progressing into the dam.

The lack of severe concrete deterioration along the upstream face below approximately 9.1m depth, as indicated by relatively high P-wave velocities in the tomograms, may be largely attributed to the protective effects of the water in the reservoir. The reservoir water protects the upstream face from freeze-thaw activity and associated cracking and moderates temperature variations within the concrete. A cumulative histogram of annual minimum winter reservoir levels from 1939 to 1999 indicates that the upper 9.1m of the upstream dam face, corresponding to the area of the most severe concrete deterioration on the upstream face, has been exposed for at least some period of time during approximately 90% of the winters over the recorded 60-year period. The histogram falls off steeply below that depth, indicating that deeper areas of the upstream face have been exposed during the winter much less frequently.

P-wave velocities were extracted from the three tomograms along the projected trajectories of three nearby cored borings and compared to measurements made on core samples from those boreholes. Core measurements include density, Poisson’s ratio, failure strain, compressive strength, and modulus of elasticity. Scatter plots of P-wave velocity versus each of the five types of core measurements were constructed in an effort to find an empirical relationship between each of these parameters and P-wave velocity. Data points corresponding to air-dried core samples and core samples from the upper 3m of the dam were omitted for the following reasons. Because the dam was mostly saturated during the tomography surveys (as indicated by water seeping from the downstream face of the dam and because the vast majority of the tomography data were acquired when the reservoir was within 3.4m of the dam crest), air-dried core samples are not representative of in-situ conditions. Measurements made from intact core samples taken from the upper 3m of the dam are not representative of the general concrete conditions at these depths because approximately 40% of the core was recovered as rubble. Because the P-wave velocities computed from the tomography data include the effect of these rubble zones and the results from the core analyses do not, the data points from these shallow depths were omitted.

The results from seismic tomography surveys conducted across an arch dam undergoing alkali-aggregate reaction are consistent with information obtained from core analyses, fracture mapping, and other studies, while providing a more complete picture of variations of concrete quality within the dam. In addition to providing information about the current conditions within the dam, the spatial progression of concrete deterioration over time may be inferred from the images obtained from the seismic tomography surveys. Assuming that areas with the lowest P-wave velocities have undergone the highest degree of deterioration, we infer that the concrete deterioration is progressing downward from the dam crest and inward from the downstream face. If repeated over the course of several years, the seismic tomography method could be a useful tool for monitoring changes in the condition of the concrete within the dam associated with the progression of the alkali-aggregate reaction.