Karpowership, part of the Turkish energy group Karadeniz Holding, has placed an order with MAN Diesel & Turbo for a total of twelve 18V51/60 engines each with a rating of 18.9 MW. Six of the engines are to be delivered during the remainder of this year, with a further six at the beginning of 2017. An additional framework agreement sets out the conditions for the acceptance of another 48 units. 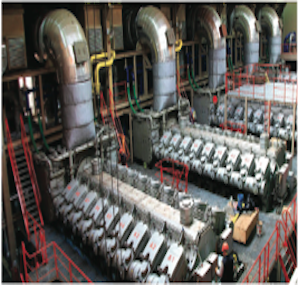 MAN has a longstanding relationship with Karadeniz. As with previous orders, the engines will be deployed in its power barge fleet. For this purpose ballast transporters, heavy transport ships and barges are converted into floating power stations, which can be deployed at any coastal site, within reason, under their trademark name ‘Powerships’. MAN will also deliver the control and automation equipment for the floating power stations, as well as further system and electrical hardware.

The engines will be deployed in a number of ships, and fired with either natural gas or heavy fuel oil. Some will be delivered as dual-fuel, while others will be supplied with a gas conversion option.

The Karpowership active fleet consists of a total of nine ships, offering a power capacity range between 30 and 470 MW. A further 22 Powerships are currently being built. The new ships, also fitted with MAN engines, will be used all around the globe.