Northland Power in Canada is planning to develop a pumped storage facility at a disused mine in Ontario. The project is not only described as being technically and economically sound but enjoying the support of the local community. John Wright spoke with Suzanne Pritchard and explained why his company has such belief in this new scheme. 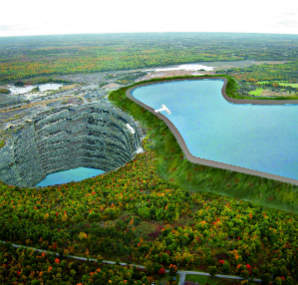 ?"This is the project that everyone likes," said John Wright, Executive Director of Business Development at Northland Power in Canada. This is a bold statement to make about any power project, and indeed quite rare to hear it said about a hydropower one. It is, however, the firmly held belief of the company which hopes to develop what could become Canada’s largest pumped storage facility; and only the second one in Ontario.

What makes the proposed Marmora pumped storage project unique is that it already has most of the components it needs in place. The plan is to utilise an existing, disused open pit mine to create a project of a closed loop configuration. It will have the ability to generate 400MW of power for five hours flat out, with a reservoir capacity of 25-30Mm3.

Furthermore, what makes Wright and his colleagues believe so strongly in this scheme is the fact that the project is needed. "Ontario has made great progress in relation to its renewable energy portfolio," Wright explains, adding that the province’s current generation of 1700MW of renewable power is set to increase to 10,700MW. "But what the province is finding now is that the system has the potential to be more volatile to operate and needs tools to help time-shift power."

Such tools can come in the form of energy storage solutions. "Storage has the potential to help us get more value out of the renewable generation we are installing…utilising any surpluses when wind and solar are plentiful and filling the void when they’re not," Paul Murphy, President and CEO of the Independent Electricity System Operator said earlier this year. "In essence it can firm up our variable resources. Located properly, storage can help relieve transmission and distribution constraints."

Pumped storage, Wright believes, is one of the more versatile operations to have in the system. It gives instant power at a utility scale, meeting peak demands of the system, as well as providing stability for the integration of variable renewable technologies. "It is a very useful asset for the power system," he said. "In whatever direction the electricity market evolves, pumped storage is the safest bet to take."

Pumped storage plans
Forty years of mining at Marmora has left a scar on the landscape in the form of 70M tons of waste rock. For every ton of iron that was excavated it has left two tons of waste rock. This is not only infertile but visible from nearby roads and properties.

Marmora’s disused open pit mine measures 1km in length and is 0.5km across. At a depth of 250m it is almost five times the drop of Horseshoe Falls at Niagara, and since 1979 the pit has filled with approximately 160m of water. This will form the lower reservoir.

The plan is to reshape the existing waste rock pile so it contains the upper reservoir within its current boundary. The upper reservoir will be inside a berm with gradual sloped sides, not a walled or earthen structure. It will be lined with gravel and an impervious liner such as asphalt. As it has a large surface area, the required volume of water for the upper reservoir can be achieved with a maximum depth of about 20m. An underground powerhouse will be built 200m below the surface.

Ultimately Marmora’s proud mining history has created a manmade geological formation – perfectly suited for playing a significant support to and substantial storage role for Ontario’s electricity system. This is because:

Other advantageous factors include the fact that the mine is close to major power transmission lines with available transmission capacity. It is only 8km from the site to the major Ottawa to Toronto transmission corridor, and this has ample capacity to move the power from Marmora pumped storage plant into the Ontario grid.

“This is a major plus point," Wright said. "We have done studies to show that there is capacity available to take power generated from this project. It’s one thing having transmission lines there," he added, "but that’s not good if they are at full capacity."

The project site is also very accessible. It is directly off Highway 7 and only 30-40 minutes away from Highway 401. This means easy access for workforce during and after construction, plus equipment and material supply.

Less controversial
Northlands Power started to look into the preliminary feasibility of the project about four years ago but has only started to develop it in earnest, proving economics and constructability, over the past 18 months. It is confident however that the project is technically and economically sound and enjoys broad community support.

“This is a great way to refurbish the mine and it is much less controversial to use an existing site. It is the project that everyone likes," John Wright said. "All three political parties support it."

But how has the company managed to get such widespread backing? "The key to public acceptance is to get involved early on with thoughtful input. We weren’t interested in doing battle with the community," Wright stated. "The Ontario government is also very sensitive to community response to projects. We are quite sure the government will have confidence and be comfortable that there is no controversy with this project."

“Early on we wanted to test public acceptance for our proposed scheme to see if it was viewed as a controversial power project," Wright went on to explain. "Marmora is a small rural community and previously had a bad experience where proposals to develop the mine as land fill for Toronto’s garbage were obviously very unpopular."

“We thought it was wise to get in there and let people know what we’re doing; especially as we were spending more and more time in the community. The reaction has been phenomenal," Wright enthused. "We held a public meeting which was well received and have become involved with local colleges and universities to explain how the project could become an extension to the classroom. The town sees this as an employment opportunity as these diminished when the mine closed. It is also viewed as positive action to clean up the landscape."

Marmora mine had historically been a source of pride for the community. In the public meeting Wright said it was clear that lots of people’s lives had been touched by the mine and by working there. The belief is that the community could regain such pride with a clean energy project which will last for generations.

Wright added: "At the public meeting I said that when local workers excavated the mine they didn’t realise they were also building the superstructure for a pumped storage project to power the province’s electric grid. One man came up to me afterwards and said he was beginning to feel a sense of pride again."

Wright was also taken aback by what he describes as "an amazing signage campaign" in Ontario. Local community signs have been displayed showing support for the Marmora project. "This has never been seen before," Wright said. "Usually you get the exact opposite response and all the signs are against power projects."

“We do not have a long list of environmental problems but we will ensure that we go through the correct rigorous processes," Wright commented. "Pumped storage is still quite new in Ontario and we have decided that the correct avenue to progress down is the one which embraces the appropriate permitting framework. We expect to spend lots of time on rigorous environmental assessment," he added.

Environmental investigations have so far focused on the effect of previous mining operations on the site. Water quality testing has been carried out in the mine which has determined that it is of an acceptable standard. Furthermore Northland Power is working with water and conservation agencies to ensure that the mine water is suitable for the surrounding watershed: some needs to be discarded in order to bring it to the correct operating level for the power project.

So if environmental barriers are not currently hindering this project which appears to have won public approval, the burning question has to be why has it not been built yet?

“We’ve carried out a lot of scoping studies in terms of the work to be done but the next step means that the cost of development will increase exponentially," said Wright. "So we will only proceed when the government gives an indication that this pumped storage project will be an asset on the electric grid. We’re currently waiting for a procurement process to enable pumped storage to become part of the energy system. The government is looking into how to accommodate this and we do understand that until this is in place contracts and power purchase agreements won’t be signed."

As pumped storage is currently a rare commodity in the province it has previously been suggested that the government and Ontario Power Authority are displaying a "cautious approach" to the technology. Wright disagrees.

“The problem isn’t pumped storage itself. We’ve been experiencing a period of evolution in the electric system and there have been tremendous changes in generation portfolios, with an increase in renewables," he explained. "Upon reflection I do think that if we took a step back the industry will wish it had developed energy storage in parallel with renewable generation. Quite simply, it is now time to play catch up."

Ontario’s expanding renewable generation has now brought the need for energy storage and demand management to the fore. "It’s a good time to have done the work we have on this project," Wright said. "It’s at a time when the province has come to recognise the need for, and is taking relatively important steps in relation to, storage."

Other energy storage techniques such as flywheel and battery storage are also being investigated by the Ontario government but Northland Power is confident that it has something which is "time tested and long proven". Wright also said the Marmora project has defensible economics. The company believes that the value pumped storage brings to the electric system in relation to storage and regulation need to be considered in the equation. They are things which the facility should get credit for.

At the present time Northland Power is waiting to see just how far the Ontario government will go in incorporating pumped storage into its energy plans. After this, and once a power purchase agreement is secured, Wright believes that environmental permits for the project could take one to two years, with construction up to four years.

Making sense
This isn’t the first time that the idea of developing pumped storage at Marmora has been considered. According to Wright, before it was disbanded, Ontario Hydro looked at the project in the early 1990s and concluded that the scheme was feasible. "But it was just the wrong time," Wright said. "It was considered an interesting concept but at that time there wasn’t a lot of renewables and it was predominately coal, nuclear and some hydro. But now the whole energy mix has changed.

“Globally I think we’d agree that we are experiencing a renaissance of pumped storage," he added. "We’re looking back at opportunities that existed before and seeing now that they are making sense. With this project at Marmora people really believe that it is not a case of if it will be developed – but when."