M701G2 prepares for start up

November 2006 is expected to see a key step forward in the evolution of Mitsubishi gas turbine technology with initial firing of the first M701G2 machine at Tepco’s Kawasaki combined cycle plant. 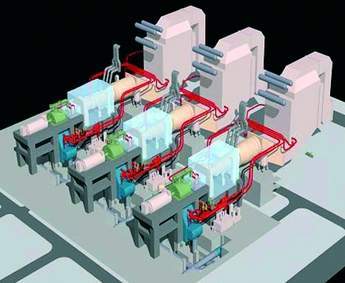 Based on good operating experience with combustor liner steam cooling, Mitsubishi has extended its application to cooling stationary turbine blade rings in the G1 and G2 machines. This is to control blade tip clearances during startup transients and thus further improve performance. The blade ring cooling achieves larger blade tip clearance during starting-up and smaller clearance at steady state operation.

In the 60Hz model, the M501G1, the steam cooling is extended to the row 1 blade ring only. This cooling scheme was installed at the T-Point G gas turbine in 2000, and the operating experience has been excellent. The first commercial M501G1 combined cycle plant is under construction at Port Westward in Oregon, USA, with a number of further G1 units ordered/planned for projects in Japan, Taiwan and elsewhere in the USA (see MPS, February 2006). In the M701G2, the 60 Hz model, steam cooling is extended to the row 1 and 2 stationary blade rings.

The Mitsubishi design philosophy has been strongly influenced by domestic (Japanese) utility requirements, with both 50 Hz and 60 Hz power plants being operated in Japan. To support this cost effectively, certain hot gas path components have exactly the same profiles in both the 50 Hz and 60 Hz engines. The unfinished parts are provided with some extra material for machining, and meeting tolerance requirements needed in each of those engines, since they have different casing dimensions.

This approach presents economies of scale from the standpoint of engine development costs, and production costs such as material, castings, machining, etc.

Mitsubishi has applied this engine development philosophy in every previous model including the original M501G and M701G gas turbines. There is commonality between these engines for the most capital intensive components, the hot gas path parts, including combustor baskets, transition pieces, fuel nozzles, row 1 turbine vanes, row 1 turbine blades, row 2 turbine vanes and row 2 turbine blades – although the commonality in parts does not apply to the latter stages of the turbine, or the compressor.

The approach is particularly attractive for reducing casting development costs, coating process development costs, spare parts inventory costs, repair and associated fixtures costs, etc. Due to the hardware commonality there is also a larger pool of data, resulting in faster resolution of issues.

The M701G2 compressor has a pressure ratio of 21:1 using 14 stages and was developed by applying the same design method as used for the M501H flow path. The latter had a 25:1 pressure ratio using 15 stages.

A smaller scale version of the flow path of the M501H compressor was developed using a scale factor of 1/3.6 with the 25:1 pressure ratio. This compressor was designated the NASC (New Air Source Compressor) and was driven by a two shaft M252 gas turbine for gathering information about blading surge margin characteristics and aeromechanics. This surge margin data was compared with the full scale load verification of the H gas turbine when it was tested in 1999 and 2001.

In 2002, the first M701G2 gas turbine underwent load tests using Mitsubishi’s water rheostat load test facility. But verification was only conducted up to 130MW due to the test limit imposed by the water rheostat and cooling tower load.

These parts have already accrued more than 9700 hours and 610 start–stop cycles at T-Point. The condition of key components was examined in October 2005, and found to be good, when they had accrued 7224 hrs and 463 start–stop cycles.

The first train was due for first firing in November 2006, with all three trains due to be in service by mid 2009.

Looking beyond Kawasaki, a further three M701G2 gas turbines have been ordered, by Morata Energia of Spain, a special purpose entity of Belgium’s Electrabel. These will be employed in an LNG-fuelled three-block combined cycle plant to be constructed at Morata de Tajuna, 50 km south of Madrid.

Evolution of turbine inlet temperature and capacity for MHI gas turbines In Japan both 50 Hz and 60 Hz machines must be supported CCGT efficiencies and power outputs for MHI’s 50 Hz gas turbines T-Point facility Blade tip clearance control – the concept Large clearance during starting up. Small clearance at steady state. Blade tip clearance control – the hardware CAD image of three M701G2 blocks at Kawasaki Kawasaki schedule Kawasaki under construction Kawasaki under construction Evolution of efficiencies within the Teco fleet (HHV basis). Not shown is a point for Futtsu group 4, which will consist of three GE System H units, due to go commercial between 2008 and 2010