M501G1 looking Westward and beyond

In the M501G1 gas turbine MHI has added some of the advanced features developed for H class technology to its G class platform, with the aim of providing a high performance but robust machine for 60 Hz markets. Following extensive testing at MHI’s in-house combined cycle power plant, the first G1 gas turbine based plant is under construction in the state of Oregon, USA. Further M501G1 units are ordered/planned, in Japan, Taiwan and elsewhere in the USA. 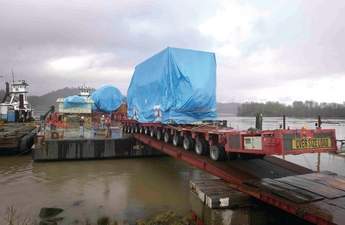 The Port Westward combined cycle plant of Portland General Electric (PGE), due to enter operation in May 2007, is the first commercial application of MHI’s M501G1 gas turbine. PGE says the new plant, for which the official “ground breaking” was on 7 October 2004, will be the most efficient utility-owned plant of its kind in the Pacific Northwest. Construction proper started in February 2005.

The original permit applications were for a two-gas-turbine plant with up to 650 MWe of capacity using F class turbine technology. But after careful analysis of projected consumer demand, a review of newly available turbine technologies, forecasts of customer elections under the state’s electricity restructuring law, the outcome of a competitive bidding process for wholesale power contracts, and an analysis of the natural gas marketplace, PGE modified its original power plant recommendations.

Following careful analysis of existing F technology and GT24 machines PGE says it decided that G class units would be a better overall long-term investment for customers because they are significantly more efficient than F class machines. As a result of the detailed analysis, the original target of 650 MWe from two natural-gas-fired F class turbines was reduced to one unit of the more efficient G class turbine technology, producing a lower output of about 400 MW, with an estimated cost of around $285 million.

An order was eventually placed with MHI for an M501G1 gas turbine, as well as a steam turbine (with down exhaust, for increased efficiency, and crossover connection from HP–IP to LP stage) – both to be manufactured at the company’s Takasago Machinery Works. MHI also has a 12-year long term service agreement covering the gas turbine, with availability guarantee.

According to Jaisen Mody of PGE one reason for the choice of MHI was the operating history of Mitsubishi’s fleet of some eighteen G class gas turbines, as well as “interviews with plant operators about their experience with technical support and services by Mitsubishi.” A second factor cited by Mody was MHI’s “verification approach”, in which “new technology and design changes are first tested at the company’s verification power plant prior to commercial release.” Mody believes this reduces problems during operation because it allows “meaningful quantitative comparisons with design assumptions.”

Located on the Columbia River, in Oregon, the Port Westward plant will have an overall installed capacity of 407 MWe, 382 MWe coming from the combined cycle itself, with an additional 25 MWe from duct firing. An auxiliary boiler will provide steam during start-up for cooling the gas turbine’s combustor transition pieces.

The natural gas will come from the Sumas hub in Washington State, which receives natural gas from Canada through the Williams Northwest Pipeline. The gas will require compression.

Grid connection will be via the site of PGE’s decommissioned Trojan nuclear plant.

The EPC contractor is Black and Veatch. The three-drum HRSG is being supplied by Deltak, the two generators by Mitsubishi Electric Co, the condenser (with 24 gauge stainless steel tubes) by TEI, and the seven-cell cooling tower by Marley. The latter uses river water for make-up, while the plant makes use of the nearby Beaver power station for demineralised water and back-up power.

The plant will have an SCR, reducing NOx emissions to 2.5 ppm, and a CO catalyst, resulting in a CO level of 4.9 ppm.

It will be commissioned and operated by a 17 member team, due on site in July 2006.

G1 technology – what is it?

MHI’s G1 and the 50 Hz G2 machine, the M701G2, incorporate a number of advanced features of MHI’s H technology (which was tested although never developed into a commercial offering) – but stop short of applying steam cooling to rotating parts. In the G1, steam cooling, as well as being applied to the transition pieces, is also used in the first row stationary blade ring, to achieve active clearance control (see MPS, May 2004, pp 13-15). In the G2 it is extended to the second row stationary blade ring as well.

Both the G1 and G2 share common turbine blades and vanes in row 1 and 2 that were upgraded from the original 1997-vintage parts in the present platform.

The M501G1 retains the same 1500°C firing temperature as the G but with 10 MW greater output in combined cycle and around 1% better heat rate.

MHI’s M501G1 gas turbine has achieved improved performance over the G without changing the firing temperature or materials, and maintaining much of the original hardware of the M501G machine.

The first M501G1 has been in operation since June 2003 at MHI’s T-Point in-house verification combined cycle power plant at Takasago, with instrumentation to verify the mechanical characteristics and performance. The operation at T-Point will continue (as in the case of the original M501G) on a long-term basis for gathering fleet leader experience for the M501G1 commercial fleet.

A key component of Mitsubishi’s verification procedure for new design technology and upgrades is this full-scale operation under actual load at the in-house T-Point power plant. This design verification approach provides a better quantitative assessment of machine capabilities than full-speed, no load testing because the T-Point power plant also dispatches electricity to a local utility grid for supplementing peak load demand during summer and winter seasons, exposing the technology to the rigours of daily start–stop cycling and operation in various load regimes.

Over a period of several years a number of modifications were carried out to the original G machine at T-Point, essentially upgrading it to the G1 specification, with installation of all the G1 modifications completed by May 2003.

This M501G1 gas turbine has now logged over 8000 hours of operation and around 500 start–stop cycles, but as already noted, some of the new hardware was installed prior to May 2003, so can be considered to have longer operating experience. Inspections to date show the M501G1 to be in good condition. The major hardware changes, and the dates they were carried out, can be summarised as follows:

• The row 1 turbine blade, row 1 vane, and row 2 vane were replaced, in May 2003, with components having improved airfoil profiles and better internal air cooling circuits, without changing materials or coatings.

• The brush seals were replaced by leaf seals, in May 2001, to reduce air leakage in the rotor. The leaf seal was applied between the compressor and the turbine section to reduce air leakage. It has a structure of multiple leaf plates arranged in the circumferential direction. The tips of the leaf plates are in contact with the rotor at shut down of the gas turbine, but are lifted up by hydrodynamic force during operation, thus maintaining a non-contact condition with the rotor. However, commercial introduction of the leaf seal has been delayed pending further optimisation, based on accrued operating experience.

• Airfoil shaped wrappers were installed on the exhaust struts, in May 2003, to reduce pressure loss.

• Combustor fuel nozzles and swirlers were replaced with MHI’s latest low NOx combustor components, also in May 2003. The steam-cooled combustor transitions of the original G were not changed. However, an acoustic damper was added for extra stability under a wider range of fuel calorific values.

• Steam-cooled blade rings, for adjusting blade tip clearance at start-up and during steady state operation, were effected in April 2000, by simply routing the existing cooling steam delivery line (for the combustor liner) through the row 1 turbine blade ring, to achieve better row 1 blade tip clearance control during operation. The concept had already been proven in the verification testing of Mitsubishi’s M501H and M701G2 gas turbines.

Summarising, the key components of the G1 can be described as follows:

Compressor. As already noted, no changes were made to the original G compressor. The 17 stage 20:1 compressor has accrued more than 320 000 h total operating experience under ambient conditions ranging from cold winter weather in New England, to hot and humid tropical weather in the Philippines. The compressor at T-Point has accrued 24 000 h of operation, with over 1400 start–stops.

• Better fuel–air mixing. The fuel injector nozzles and swirler were re-designed so that local flame hotspots are reduced.

• Wider turn-down capability and lower CO and unburned hydrocarbons (UHC) at lower load. (CO/UHC at no load decreases to 75% of that of conventional DLN combustor).

Turbine. As mentioned previously the airfoil shapes and internal cooling circuits of the row 1 vane, row 1 blade and row 2 vane were upgraded using advanced CFD and heat transfer technologies. The remaining stages use the same airfoil profiles as the G for blades and vanes.

Materials. There were no changes in materials from the G – ie, same materials for combustor, hot gas path and rotor materials.

Thus all four stages of turbine blades use MGA1400 nickel-based superalloy. It is used in the form of directionally solidified (DS) casting for blade rows 1 and 2, and as conventionally cast (CC) for blade rows 3 and 4. The stationary vane material is conventionally cast MGA2400 alloy, which is also a nickel-based superalloy, with excellent thermal fatigue, creep, oxidation, corrosion and weldability properties. The high temperature coatings are the same as those in the M501G. Rotor disks are made from low alloy steel.

Cooling. With the exception of the row 1 turbine blade ring, as mentioned previously, the cooling steam scheme of the M501G1 is the same as the M501G.

The cooling steam that is used to cool the turbine blade rings and the combustor transition piece is supplied from the heat recovery steam generator, and is subsequently returned to the inlet of the IP turbine at a higher temperature after extracting heat from the combustor.

Dah Tarn will be constructed, on a turnkey basis, in two stages, with stage I consisting of two 3-on-1 blocks based on M501F gas turbines (total = 1400 MWe) and stage II of four 2-on-1 blocks employing M501G1 gas turbines (total = 2800 MWe). Commencement of commercial operation is planned from June 2005 to September 2006 for Stage I facilities, and sequentially from February 2008 to May 2010 for Stage II facilities.

MHI says it won the Dah Tarn contracts against tough competition with GE and Alstom.

A further fifteen M501G1 units are understood to be planned in the USA and Japan, with public announcements expected shortly.