Lynemouth’s silo mentality on the road to full conversion

Work is now well underway on conversion of the Lynemouth coal fired plant to 100% biomass. 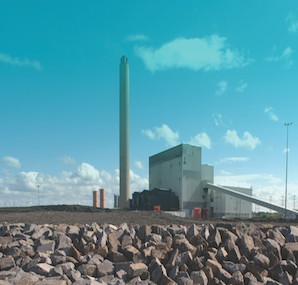 EPH (Energetický a pru °myslový holding), Czech utility and energy trading company, sees its Lynemouth biomass conversion project in the UK as the basis for a European portfolio of dispatchable and flexible renewable plants employing fuels such as biomass, waste, biogas and landfill gas.

The Lynemouth conversion has a budget of over £400 million, the company says, and the converted facility is expected to be fully operational by the end of this year.

A recent milestone for the project was the substantial completion of three silos, the centrepiece of large-scale wood pellet handling facilities being constructed for the project at the Port of Tyne.

The silos, each 36m (118ft) tall and 45m (147ft) in diameter, have been built by Spencer Group as part of a contract awarded by EPH subsidiary Lynemouth Power Ltd. In due course, the silos will be topped off with penthouse structures housing the drive mechanism for the wood pellet conveyor system, taking the full height of the buildings to 45m.

The facilities will handle up to 1.8 m tonnes of wood pellets annually, to support the full conversion of Lynemouth power station, on the Northumberland coast, from coal-burning to biomass.

Wood pellets arriving at the port will be conveyed mechanically from the quayside to one of the three new silos, each capable of storing 25 000 tonnes of material. The pellets will then be discharged from the silos via two conveying streams to a rail-loading facility to take the material to the Lynemouth power plant by train.

Spencer says it has used industry-leading dust control systems in the material handling system, as well as sophisticated measures to monitor and manage the condition of the wood pellets.

To complete the project, Spencer will carry out modifications to the existing rail infrastructure to provide dedicated rail lines to serve the Lynemouth plant and connect the new facilities to the 11 kV supply.

Hull-based Spencer’s previous biomass experience includes facilities for the Drax conversion. In 2010 Spencer designed and built a biomass reception, handling and storage facility at the Drax power plant site and a wood pellet storage and rail-loading facility for Drax at the Port of Tyne. And in 2013 Spencer constructed biomass handling, storage and discharge facilities at the Port of Hull, again in support of Drax’s coal to biomass conversion.

Further biomass silos are under construction at the Lynemouth power plant site, as part of Sir Robert McAlpine’s scope of work on the conversion project.

EPH acquired the 3 x 140 MWe Lynemouth coal fired power plant from RWE at the beginning of 2016. It was originally built as a captive power plant for the adjacent aluminium smelter. RWE bought it from Rio Tinto in 2012. Dating back to the 1970s, the plant has no SOx or NOx controls. Under the LCPD (Large Combustion Plant Directive) it was able to run on coal until the end of 2015, but to meet IED requirements would have needed FGD and secondary NOx controls, eg SNCR, as well as coping with increased costs arising from taxes on carbon use. However, RWE identified the plant as potentially a good candidate for biomass conversion since low temperature cooling water from the North Sea results in inherently high efficiency (with more than 40% unit gross efficiency anticipated) and the steam turbines were upgraded relatively recently. Also the relatively small unit sizes facilitate biomass logistics.

In 2013 RWE took advantage of an early call for “shovel ready” projects to apply for support under the UK government’s new “Contract for Difference” scheme for incentivising low carbon power generation, such as biomass. Under this regime the plant gets a fixed income of £105/MWh over ten years regardless of electricity spot price.

As well as Spencer, other key contractors working on the Lynemouth conversion include, Ramboll (owners engineer), Emerson (Ovation control system and electrics), McAlpine (fuel handling and storage at the power plant site) and Doosan Babcock (boiler and emissions control).

The Lynemouth mills are of the vertical spindle type, which lend themselves to biomass conversion, but with some capacity reduction. It has proved possible to make use of a spare mill to increase overall milling capacity and compensate for lower calorific value and density of biomass relative to coal.

Mill velocities need to be increased to deal with bigger particle sizes and the mill air inlet temperature needs to be reduced by means of the PA cooler to prevent wood pellet ignition in the mill. Heat is extracted from the primary air by the PA cooler before it enters the mill and transferred to the boiler feedwater to help maintain efficiency.

Because of the larger particle size of milled biomass, about 1 mm (some ten times that of milled coal) it takes longer to heat up and ignite in the burner. To achieve low NOx, lower fuel injection velocities are therefore needed to give particles time to ignite.

The biomass burner for Lynemouth has been proven at full scale in Doosan’s Renfrew test facility and also on one mill group in a utility boiler.