London’s waste to get the plasma treatment

As the quantity of municipal waste in cities worldwide starts to become a serious problem, its hitherto disregarded calorific value is beginning to interest power generation development companies. One such company is planning to bring the plasma treatment process, in a unique combination with fuel cell technology, to bear on London’s waste mountain. 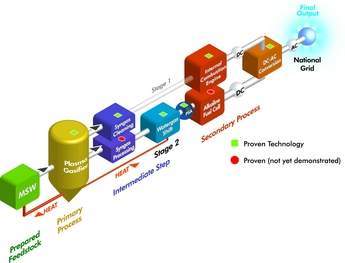 By enabling the recovery of available energy from low-value materials, gasification technology has the potential to reduce environmental impacts as well as disposal costs. It is flexible and reliable and is an existing clean energy technology. Worldwide gasification capacity is projected to grow 70 % by 2015 and while it is already a well-known technology in the chemical, fertiliser, and coal-to-liquids industries, gasification applications are becoming increasingly diverse. One industry that will likely benefit from this diversification is the electrical power industry. Gasification’s environmental and economic benefits suggest a potential solution to the challenges set by renewable energy targets and the need to reduce landfill in the UK, and elsewhere.

The UK is currently at a crossroads. In his 2009 Budget speech, the UK chancellor announced a new target of a 34% cut in emissions by 2020. Energy efficiency investment received a boost, with £375m promised in extra spending, and another £70m was set aside for decentralised and small-scale low-carbon energy. The Chancellor also announced £405m for low-carbon industries and green manufacturing. Alongside this, UK energy projects could get up to £4 bn from the European Investment Bank, although this figure is far from certain as the EIB does not allocate funds by country, but to individual projects.

While these sums of money may not be mountainous, they are still more than were initially expected, given the current economic climate. This suggests that the government listened to the industry’s concerns about a funding gap and acted appropriately, albeit belatedly.

Waste2Tricity wants to prove that the conversion of waste into electricity is commercially viable and makes environmental sense and to that end plans to develop renewable energy plants at a significantly lower cost per MW of capacity than other systems. It aims to bring cutting-edge technology to market and prove that EfW is viable – that is, carbon efficient and economical – using a unique combination of new generation alkaline fuel cells and plasma gasification or other existing proven technologies. Recently, a consortium led by Waste2Tricity submitted an Expression of Interest to the London Waste & Recycling Board (LWRB), in response to the Board’s open call for environmentally responsible and innovative approaches to deal with the capital’s 21 million tonnes of rubbish produced annually.

Taking carbon based waste, either municipal solid waste (MSW) or waste from business and industry, the company’s process will convert it into hydrogen and then use the hydrogen to generate power through fuel cells.This will play a major role in the reduction of rubbish going to landfill and, potentially, make a significant contribution to the UK electricity supply.

AFC Energy plc, Alter NRG, and WSP Environmental. Its proposition is to establish a £135 million commercial scale plant capable of converting 250 ktonnes per year of MSW into electricity, helping meet the LWRB’s objectives of reducing, recycling or disposal of waste in ways that are beneficial to the environment. GdF Suez has expressed an interest in purchasing the electricity produced.

The project will meet LWRB’s aim to support ‘new and emerging advanced thermal conversion technologies, with a preference for technologies that have the potential to produce hydrogen from waste’. It will also help achieve the Board’s stated benefits to stakeholders of ‘local heat and power plants providing cheap energy; reduction in carbon footprint; energy security; and lower financial costs for London boroughs through avoided landfill tax and gate fees’.

The proposed process will be eligible for subsidy incentives, under the government’s offer of double Renewable Obligation Certificates (ROCs) for advanced gasification plants from April 2010, thereby helping electricity suppliers meet their renewable targets. Another driver will be the looming gap in electricity supply – with one third of capacity going offline as ageing nuclear and coal plants need replacing.

First, a homogenised waste stream is obtained, either in conjunction with an existing waste management company, allowing the installation to be established on an existing site, or from an industrial customer, such as a supermarket chain, that back hauls its waste to a central depot. Ideally, a mix made up of 35% organics, 35% paper and cardboard, 25% plastic and 5% other materials works best, and if sorted in advance the mix can be regulated before it enters the gasification process.

The Waste2Tricity process will be implemented in two stages. In the first stage known, proven and commercial technologies will be used, employing internal combustion engine generators or gas turbines. The second stage will see the integration of alkaline fuel cells, once fully commercialised, replacing the ICEs/GTs to increase the efficiency and net output of a waste to electricity facility by 60%+.

With the gasification process validated by advanced waste treatment technology specialists, Juniper Consulting, Waste2Tricity’s system is expected to have significant environmental and cost benefits over systems already in operation.

In the first stage, one option is to use Alter NRG’s commercially established Westinghouse plasma gasification technology to convert MSW feedstock into syngas, which is then cleaned. The raw gasification process uses plasma torches at 8000°C to create a bed of very hot gas, which, with limited oxygen, causes the waste to break down to its gaseous components, forming a syngas. This gas is largely composed of H2, CO and a small amount of CO2, with the energy residing in the H2 and CO. The by-product is a vitrified slag, an inert material that can be used for aggregates in road building. The cleaned syngas is used to drive ICE or GT based generators.

In the second stage the syngas would be cleaned more thoroughly and mixed with steam at 200°C to bring about a low temperature water-gas shift reaction. This is a routine but important industrial reaction (that can also be carried out at a higher temperature, 350°C) in which water is combined with carbon monoxide in the presence of a catalyst to produce H2 and CO2. The resulting H2/CO2 mixture is then put through a PSA (pressure swing adsorption) system, which purifies the H2 sufficiently to operate the next phase, the alkaline fuel cell.

This unique integration of alkaline fuel cells is projected to increase the net output of electricity by a minimum of 60% over an internal combustion engine and by over 130% compared to a steam turbine. This will result in a very efficient and economic means of converting EfW, generating 2100 kWh of electricity from every tonne of MSW currently sent to landfill. Waste2Tricity estimates that the cost of generating electricity could be less than 3p per kWh at today’s prices.

Alkaline technology is the most well-known and proven of all fuel cell technologies. Fuel cells developed by AFC Energy are claimed to offer three unique advantages when compared to other systems. First, as they are low temperature units standard engineering plastics are used in construction, and combined with careful engineering design this leads to lower cost. Second, the stack has been replaced by a serviceable cartridge, allowing an extended warranty.Third, at 55 – 60% net system conversion efficiency, alkaline cells have the highest conversion efficiency of any fuel cell system – put another way, their deployment will produce more electricity than any other system type.

Government regulations and local planning obstacles, influenced by the capacity of the plant, will be the primary issues to be addressed with integration. Facilities can however be built on existing landfill sites, reducing the likelihood of opposition to their construction; and can utilise existing infrastructure such as roads built for waste transport. This would preferably be close to electrical energy demand centres to minimise transmission losses.

Increasing levels of recycling and composting could depress the carbon content of waste, reducing convertible energy per tonne. The plasma gasification method of waste management works hand in hand with recycling, which is a good solution for certain types of waste where there are already established collection, sorting and handling facilities, as well as a steady market for the recovered materials. But, due to cross contamination, much useful material is rendered valueless for recycling. So the best course remains to reduce, re-use, recycle and compost as much as possible, but whatever waste is left over should be utilised for EfW.

Gasification technology could change the disposal of waste from being an environmental headache into a commercially viable proposition, providing local authorities or high energy using companies with a revenue stream and increasing the amount of renewable electricity, not only in the UK but globally as well.

There are more than 140 gasification plants operating worldwide, and gasification capacity is expected to grow further, by 70% to 2015. The question that must then be asked in the UK is whether it will be a significant player. The answer is dependent on whether local councils will have large enough budgets to convert existing incineration plants into more efficient EfW plants harnessing technologies like plasma gasification and fuel cells, thereby eliminating issues of air pollution and waste ash and ultimately producing at least twice as much electricity for export to the grid for every tonne of MSW processed.

The UK has a looming energy gap with or without the recession, and if there is a role for the waste industry to help fill that gap by supplying heat, electricity and hydrogen or fuel gases, then that role must be taken up. But any country that takes up this challenge must necessarily expand its technological aspirations.