Lines in the sand

The UAE’s budding nuclear regulator recently told an IAEA conference about its proactive international cooperation and day-to-day work as the organisation shifts focus towards overseeing operational reactors at Barakah. Corrina Thomson looks at the work it’s already done and what it hopes to achieve as the country’s nuclear sector begins to gain traction. 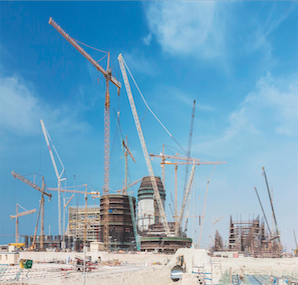 The Barakah construction site is located on the Arabian Gulf, about 300km from Abu Dhabi in the United Arab Emirates (UAE). Four Korean APR 1400 reactors from a KEPCO-led consortium are at various stages of construction at the site and are being built for the Emirates Nuclear Energy Corporation (ENEC).

If approved by the regulator the Federal Authority for Nuclear Regulation (FANR), ENEC hopes that the four units will provide electricity to the grid by 2020, supplying about 25% of the UAE’s electricity requirements.

Barakah is in the interesting position of being regulated by a comparatively young regulator in a global context, and one which is committed to openness and proactive engagement through a raft of International Atomic Energy Agency (IAEA) work. FANR was established in September 2009 when UAE President, H.H. Sheikh Khalifa bin Zayed Al Nahyan approved the nation’s federal law on the peaceful use of nuclear energy.

FANR has already demonstrated its commitment to international cooperation by being ranked first in the Asia and Pacific region in implementation of IAEA technical cooperation projects.

From 11th to 15th April, the International Atomic Energy Agency (IAEA) held a conference in Vienna on ‘Effective Nuclear Regulatory Systems: Sustaining Improvements Globally’. The conference was designed to play a key part in global efforts by safety and security regulators to review current issues and, particularly, their key role in ensuring safety and security across the world.

FANR gave a presentation entitled ‘Regulating Nuclear Reactor Construction and Commissioning and Preparation for Operation – Challenges for a New Regulatory Body’ which outlined the structure of the regulator, its work, inspection of Barakah, review of
the site license application, preparation for oversight of operations and international cooperation.

Staffing is an important issue for FANR as Barakah is the first nuclear reactor site in the UAE, thus nuclear skills and experience are highly valued. International cooperation has been vital in bringing the Barakah project to the stage it is at today.

The ongoing human resource strategy for long-term sustainability is focussed on developing Emirati nationals to take increasingly responsible positions while retaining some international experts. FANR complements its in-house training with collaboration with ENEC, Khalifa University, the IAEA and other partner institutions. This is part of a UAE skills strategy that offers a range of education, training and development opportunities to UAE citizens.

As well as these licenses the regulatory framework also includes issuing regulations to operators and supplying guidance. It must also consider comments from stakeholders, expert information and internationally recognised standards. To date, FANR has issued 20 regulations related to the nuclear power programme. Barakah Nuclear Power Plant, Abu Dhabi, UAE, during construction in 2014. Photo courtesy of ENEC

FANR highlighted its regulation 16 on operational safety including commissioning, which has 32 articles that cover areas such as operational limits and conditions, configuration control, management of ageing and core management and nuclear fuel handling. FANR also plans to conduct periodic reviews to see if regulation amendments are needed to take account of international experience and operating experience.

The licensee, ENEC, has overall responsibility for managing safety and oversees design, procurement and construction by the main contractor, vendor and sub-vendors. FANR carries out a construction inspection programme to verify regulatory compliance.

Nuclear construction professionals and operators should aim to use only those products and services that are of the highest quality in safety-related functions in particular. This is to provide reasonable assurance that parts will perform their intended safety functions when required. Countries often advocate a proactive approach to detect and prevent use of counterfeit, fraudulent and suspect items (CFSI) in equipment, components, systems and structures, and try to prevent CFSI in the supply chain.

FANR’s presentation stated that CFSI is a challenge and has paid due attention to this issue from an early stage, particularly in view of CFSI-related issues in the Korean domestic nuclear programme. The UAE regulator said it has conducted specific CFSI- focused inspections at Barakah, as well as vendor sites, and verified ENEC and the main contractor’s CFSI oversight programme. So far no CFSI-related issues have been noted at Barakah, the regulator reported.

The regulator asked ENEC to look into post-Fukushima safety factors and identify any proposed improvements. These investigations included initiating events and consequential loss of safety function, station blackout, ultimate heat sink issues, and severe accident management procedures. ENEC completed the assessment for FANR and identified a number of safety improvements for Barakah to improve the robustness of the plant.

Construction Inspection Test Plan (CITP) tables are needed for non-nuclear commissioning as part of the construction license review. The plan requires testing of key safety-related structures, systems and components. For these structures, systems and components, ENEC had to confirm that key safety functions are verified during commissioning. It also had to identify the test procedures where functions would be verified, and the source of the designed parameters. ENEC has to report on the results of completion of CITP items as a construction license condition.

In terms of readiness to begin operations, ENEC has to describe the means and supporting evidence that the programmes, procedures and staff are ready for the new operational phase. The regulator has to review the technical basis of this information, sample and inspect supporting evidence identified by ENEC and ensure that all elements of operating programmes required by ENEC’s management system have been adequately demonstrated.

The construction inspection programme will continue at a high level until the first unit enters service and will taper off as construction activities wind down at the site. Overseas vendor inspections will decrease focusing on new vendors or any major modifications or replacement components.

The focus of inspection activity will shift to oversight of the licensee’s conduct during operations, oversight of outage management and contractors and reactive inspections of events and incidents. FANR will change focus from the review of large applications to regulation and oversight of plant operations, through safety assessment and evaluation of operational performance.

FANR’s pointed out that it must be able to address new and emerging international operating experience and have the regulatory capability for emergency preparedness and incident response. The regulator also highlighted continuing development of regulatory programmes for high-level waste management, disposal and decommissioning.

Operating experience feedback will grow in significance as a source of information on the operator’s performance, for example from licensee event reports, and additionally through international experience. FANR said this would be tightly integrated with inspection and safety assessment. This licensee performance assessment during operations is also a key part of the regulator’s ongoing role.

New staffing and competencies required were also outlined to the conference. The regulator runs a project which aims to identify staff and skills needed to perform with less reliance on external technical support. It also aims to have more Emiratis occupying managerial and technical positions.

Some of the goals of this project are to identify future types of work and regulatory areas that need attention over the next
five years based on perceived risks and operational experience. Long-term staffing requirements are also part of the project.

FANR is keen to demonstrate its openness and compliance with current laws and good practice. In its presentation it stated that since its inception it has gained international recognition as a competent regulatory body with close IAEA cooperation.

For its non-proliferation efforts, FANR said it had gained further recognition in 2015 for adhering to IAEA standards.

The UAE is a contracting party to the IAEA Convention on Nuclear Safety and has participated in the fifth and sixth review meetings of the convention, held in 2011 and 2014, as well as the extraordinary meeting held after the Fukushima Daiichi accident. FANR is also currently preparing a national report for the convention’s seventh review UAE | Infrastructure meeting scheduled for April 2017.

Learning from regulation of Korean reactors is also pertinent to FANR, which is maintaining an ongoing relationship with the Korea Institute of Nuclear Safety (KINS).

A follow-up mission on the IAEA Integrated Regulatory Review Service (IRRS) was conducted in 2015. The IRRS is designed to strengthen and enhance national regulatory infrastructure for nuclear, radiation, radioactive waste and transport safety, and security of radioactive sources. It is underpinned by the tenet that nation states have ultimate responsibility for safety. The follow-up mission was to review the measures taken after recommendations from a previous mission in 2011.

The mission compared the UAE regulatory framework for nuclear and radiation safety against IAEA safety standards and concluded that FANR has further strengthened its regulatory oversight and made significant progress in addressing the findings of the 2011 IRRS mission.

An Emergency Preparedness Review Mission was conducted by IAEA in UAE in March 2015 which looked into preparedness and response arrangements at Barakah. The regulator also requested an IAEA Occupational Radiation Protection Appraisal Service, which took place in November 2015.

FANR concluded its conference presentation by saying UAE had made many advances in implementing its civil nuclear energy programme since adopting a national policy on peaceful uses of nuclear energy. It is now enacting a plan that includes international agreements, a legal framework, establishment of an independent regulatory body and an implementing organisation, technology procurement, human resource development and capacity building.

The regulator also pointed to the UAE as a model for other states that want to gain international support for using nuclear power. FANR said issuing construction licenses and regulation of construction have been successful thus far and provided a foundation for developing regulatory skills and practices.

It has now reached a transition point where commissioning and operations are a new focus and recognises this will require continued diligence and commitment to safety culture. FANR stated that the UAE is committed to building and sustaining a world-class nuclear safety culture.