Lifting the lid on corroded PWRs 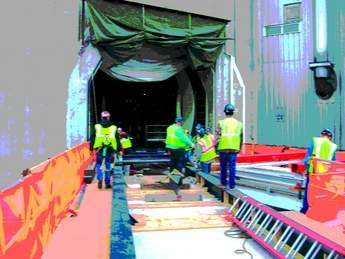 Nuclear power plant owners across the USA are running at full throttle in a programme to replace reactor pressure vessel closure heads (RVHs). The RVH – sometimes called RVCH – is a key component of a pressurised water reactor. As its name suggests, the RVH is effectively the ‘lid’ on top of the reactor vessel, although it contains enough mechanical and instrumentation devices to qualify as a sophisticated machine in its own right.

The NRC’s edict came on the back of the discovery of extreme corrosion on the reactor vessel head at FirstEnergy’s Davis-Besse plant in Oak Harbor, Ohio. The corrosion, caused by boric acid residue, had created a cavity approximately 200 mm by 120 mm across and 150 mm deep, threatening the integrity of the vessel’s pressure wall. Failure of the pressure wall could result in a loss-of-coolant incident.

The implications of the heightened inspection regime, however, in terms of both cost of plant outages and in personnel occupational dose, has made it more economic for owners to replace RVHs, especially as this also provides the opportunity to add technological improvements to such aspects as ventilation systems, control rod drive mechanisms (CRDMs) and instrumentation.

A total of 69 RVH replacement projects have been identified to date. As of April this year, 28 RVH replacements had been completed at 18 different nuclear plants across the USA. Replacing RVHs is logistically tricky, with specialist rigging contractors transporting the replacement heads to site, taking out the old and installing the new. At five plants, the vessel heads could only be replaced by constructing an opening in the side of the containment building. Creating such an opening and, more importantly, restoring the integrity of several feet of concrete, multiple mats of reinforcing bar and steel liners is a time consuming, costly civil engineering effort.

In most cases, however, it has been possible (although sometimes only just) to take out the old head and bring in the new through the equipment hatch in the side of the containment building. This method is quicker, cheaper and simpler, but can require innovative rigging approaches, specialised equipment, and a great deal of hands-on experience.

A typical feature of nuclear power plant design is an overhead polar or gantry crane inside the containment building. These cranes are designed to be able to lift off the entire RVH assembly to allow refuelling of the reactor. Usually they can also be used to lift out the original RVH and replace it with the new one. The tricky part is getting the old head out of the containment building and the new one in, as well as manoeuvring the new one into the correct orientation for the polar crane to make final placement. This is where expert rigging comes into play.

Where possible, Bigge’s general approach is to engineer and construct a runway of beams leading into the containment building through the equipment hatch. A hydraulically-controlled structural steel cart on Hilman rollers carries the RVH horizontally through the hatch opening. Once inside, the containment building’s overhead polar crane is used to ‘up-end’ the new head (or ‘down-end’ in the case of the old head being removed). The polar crane is then also used to lift the RVHs to and from either the plant’s ‘head stand’, or the runway system, to the reactor.

To enable the RVHs to be rotated and lifted/lowered during up-ending and down-ending, a custom-designed steel A-frame structure is connected to it. Because nearly all the weight of the combined RVH and CRDM assembly is in the head itself, the A-frames attach through the head flange holes with large (180mm diameter) threaded studs. This ensures that not only is the connection strong and secure, but that it can also be made and unmade rapidly, which is crucial. Nuclear power plant outage schedules always have tight timetables to minimise both plant downtime and personnel exposure.

Replacing the RVH is not quite as simple as it sounds, of course. Typically, the heads weigh in the region of 150 tons, or even more if the CRDM is attached, which it often is. The diameters of the heads are either 13 feet (4 metre) or 17 feet (5.2 metre) depending on the size of the vessel. RVHs with CRDMs attached stand nearly 30 feet in height (9.1 metre). Moving loads of this size and nature requires extensive pre-job planning, with detailed surveys of the route to be travelled, and engineering to design the beam runways, A-frames and lifting rigging.

Often there are space constraints created by the plant’s structure, ventilation ductwork, cable trays or piping that limit the space to down-end and up-end the RVHs inside the containment building. Frequently, the old RVH is actually lowered to horizontal as it passes through the equipment hatch, on a runway that is designed not square with the opening but askew to avoid the various obstacles.

Laser photogrammetry may used to determine the precise dimensions of plant features, since they do not always precisely match the owner’s drawings. Everything is checked and rechecked, in three dimensions, since there is usually little room to spare and sometimes just barely a millimetre or two.

As often as not, plant circumstances dictate that innovative rigging solutions are required. Each project has its own particular challenges. A case in point was on unit 2 at the Millstone nuclear power plant in Waterford, Connecticut (Figures 1 and 2). For the Millstone RVH replacement project in April 2005 Bigge pioneered a ‘cantilever beam’ head extraction and insertion method. In crude terms, this involves putting the head on the end of a big ‘stick’ (actually a steel beam) and poking it through the equipment hatch. At Millstone, Bigge was working for prime contractor Westinghouse. Such was the success this approach that it was repeated again at Constellation Energy’s Calvert Cliffs, in Lusby Maryland in April this year where the prime contractor was Framatome ANP.

On both the Millstone and Calvert Cliff projects, the major constraint was that the diameter of the equipment hatch opening was just 25mm greater than the diameter of the RVH which meant that there was not room to feed a conveying runway system through the hatch. In addition, the floor of both these containment buildings was not strong enough to take the weight of the RVHs and so a method had to be created to transfer the replacement RVHs directly to the slings of the polar crane without first setting it down on the floor.

Narrow equipment hatches are not the only constraint encountered on these jobs. Sometimes the containment building hatches are elevated substantially above grade level. At PSE&G’s (Public Service Electric & Gas Co.) Salem plant in New Jersey (Figures 5 and 6), the equipment hatch is 12 metre above ground. The solution here, where Bigge worked for Framatome ANP on both Units 1 and 2, was to design and construct an extended runway at height. For Unit 2, Bigge used hydraulic gantries to lift the RVHs to and from the equipment hatch. An additional problem at Salem was that the polar crane within the containment building was not available to down-end the old RVH or up-end the new one, requiring Bigge to use a telescopic hydraulic gantry and special A-frame design for rotating and transporting the heads.

Another transporting challenge was at Southern Nuclear’s Farley plant in Alabama. Working for Westinghouse, Bigge used bolstered rotating carts to negotiate a tricky 90 degree turn in the travel path of the RVH. The new head had to enter the containment building flange-end first rather than the more conventional CRDM-first approach.

Whatever the circumstances, significant engineering input is always needed. However, equally important is an experienced rigging crews to carry out these jobs. Experience can make a real difference because, in the nuclear industry, there is no margin for error in the execution.

The combination of innovative engineering and experienced supervision, however, has proven that whether it is 90 degree turns, elevated hatches or an inch to spare, reactor head replacements can be carried out safely and swiftly.

Replacing the reactor vessel head at Millstone nuclear plant in Waterford, Connecticut, was made challenging by the minimal clearances available through the equipment hatch. The vessel head was attached to a specially fabricated A-frame structure to feed Where possible, replacement reactor vessel heads are brought into the containment building on a specially fabricated runway feeding through the equipment hatch. Often, however, this is not so simple. At PSE&G’s Salem plant, for example, the equipment hatch is 12 metre above ground and so specialist rigging contractor Bigge had to design and construct an elevated runway and use hydraulic gantries to lift the repla