Chris Seddon discusses the cause of the failure of Massingir dam bottom outlet works in Mozambique, and details the lessons to be learned for designers of reinforced concrete pressure conduits or penstocks 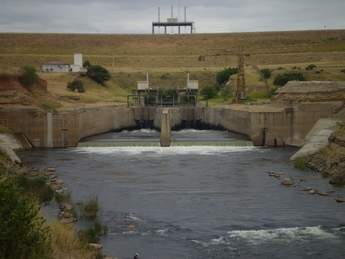 Massingir Dam in Mozambique has a maximum height of 48m and a gross storage capacity of 2.9Mm3. It is owned by the Republic of Mozambique and administered by Administraçáo Regional De Águas Do Sul (ARA-Sul). It was completed in 1977.

On 22 May 2008 there was a massive bursting failure of the two 8m x 8m horseshoe shaped reinforced concrete conduits that comprise the outlet structure of the bottom outlet works. Prior to the failure, the two downstream radial gates were closed and the reservoir water level was at 122.4m, which is 7.4m above the level of the gated spillway sill. Because the spillway gates had only been installed a few years earlier, the hydrostatic pressure in the conduits was then the highest that it had ever been in the life of the dam. In October 2008 a contractor was appointed to demolish all loose and cracked concrete and to remove rubble and reinforcement, and this work continued well into 2009.

Aurecon was appointed by ARA-Sul to investigate and report on the cause of the failure and a detailed report was duly submitted in May 2009. This article is an abridgement of that report.

Figures 1 and 2 show the layout of the Massingir Dam bottom outlet works with the area of the failure indicated. Photographs 1 to 5 show different views of the outlet structure before, during and after the failure.

Detailed structural analyses were carried out for conditions just prior to the failure in order to determine the stresses in the concrete and reinforcement at that time. Several different sections were analysed using 2-D plain strain finite element analyses and the programme “PROKON PS” [7]. Stresses in the reinforcement were calculated on the assumption of the concrete having zero tensile strength. Hydrostatic pore pressures within the concrete were taken into account and this concept is discussed later in this article. Two dimensional (2-D) analyses in the cross sectional direction were considered appropriate for this investigation as it was clear that the predominant structural action was hoop tension.

The analyses showed that the maximum tensile stress in the reinforcement was 183 MPa and that generally the tensile stress did not exceed 150 Mpa. Comparing these values with the yield strength of the reinforcement at 235 Mpa indicates that the reinforcement was not overstressed at the time of failure, even on the basis of water retaining code design. Pull-out punching shear stress in the cover concrete under the main reinforcing bars was found to be 0.91 MPa at one point and this was considered to be excessive. Elsewhere this stress did not exceed 0.56 MPa. For the calculation of this stress it was assumed that hydrostatic pore pressure had penetrated the concrete to the depth of the reinforcement. This was considered likely because cover concrete is usually more porous than the main concrete and because micro-cracking could well have extended to this depth.

A basic finite element analysis was carried out by the designers of the project in 1969. The only cross section analyzed was the one with three conduits together upstream of the outlet structure. This showed all the tensile stress on the inside faces of the conduits and this is presumably why all the main tensile reinforcement was placed on the curved inside faces. No analysis was done for the two conduits in the failed area of the outlet structure.

Tests on 150mm diameter concrete core samples and lengths of 40mm diameter reinforcing bars were carried out by the Laboratorio de Engenharia de Moçambique . These tests showed that:

• The concrete was sound and hard with a compressive strength at failure of 40 MPa.

• The concrete tensile (splitting) strength at failure was 2.3 MPa.

• Quantities of Sulphates and Chlorides were very low.

• The tensile strength of the reinforcement was found to comply with stress grade 235 NL. i.e. round mild steel bars with a minimum yield strength of 235 MPa.

Inspections and observations on site

Various inspections were carried out on site with the specific purpose of establishing the extent and mechanism of the failure and the soundness of the remaining concrete structures. Numerous photographs were taken and a few are reproduced here. The main observations were as follows:

• The concrete appeared to be sound and hard, as witnessed by the amount of effort required by the demolition contractor to break it.

• The 40mm diameter reinforcing bars were mangled but generally not fractured and there was extensive removal of the cover concrete caused by the peeling off (tearing out) of the main tensile reinforcement from the inside faces. This was widespread in the failed area as can be seen in the photographs.

• In both conduits the steel lined section downstream of the failed area is generally in excellent condition. However at its upstream end there is some serious cracking of the concrete surround and some short cracks in the steel liner at the top corners.

The cause of the failure

The cause of the failure of the outlet structure of the Massingir Dam bottom outlet works is considered to be deficient reinforcement detailing.

It appears that the design did not take account of hydrostatic pore pressures acting within the concrete walls and top sections of the conduits. It is also apparent that the designers did not realize that in time these pressures could act behind the line of the reinforcement and not at the inside faces of the concrete. This led to the detailing of the main tensile reinforcement as curved bars on the inside curved surfaces of the structure where it would tend to pull out under load.

It is significant that the failure occurred some six hours after the right hand downstream radial gate had been closed. Clearly this was the time taken for the full hydrostatic pressure to penetrate micro-cracks, joints and pores in the concrete until stresses became excessive and the failure was triggered.

As indicated by the test results, the quality of the concrete and reinforcement was found to be good and is not considered to be a contributory cause of the failure.

Figure 3(a) shows the original reinforcement details of the Outlet Structure at Section A-A. The limited space available for this article prevents the inclusion of further sections. From all observations on site subsequent to the failure, the reinforcement was fixed exactly in accordance with these details.

The deficiencies identified in the detailing are:

• The main tensile reinforcement was curved and placed on the inside curved surfaces of the structure where it would tend to pull out of the concrete under load.

• In the central wall, these curved bars were the only “vertical” reinforcement.

• No shear links were provided.

Figure 3(b) shows a preferred, with hindsight, reinforcement arrangement for Section A-A. In this section the main tensile reinforcement has been shown as straight bars crossing over and being well tied back into the concrete to prevent pull-out on curved surfaces. Some shear links have been indicated.

The trigger to the failure

Deficient reinforcement detailing has been identified as the cause of the failure of the structure and the mechanism of the failure has been identified as the main tensile reinforcement pulling out of the concrete on the curved inside faces. It is also apparent that once a failure started in a small “trigger” area that a progressive failure would have occurred very rapidly. Thus the actual trigger that started the failure is of lesser importance than the underlying cause. One possible trigger mechanism is illustrated in Figure 4.

Hydrostatic pore pressures within the concrete

The main justification for this concept is that this is exactly what is done in concrete dam design. See Reference 1: Section 8, Concrete Gravity Dams, Sub-Section 8.10. Internal Water pressures, (a) Basic Considerations, and Reference 2: Chapter 3, Design Data and Criteria, Section D- Loads, Sub-Section 3-8. Internal Hydrostatic Pressure. Similar descriptions are given in Reference 3, Section 16, Gravity Dam Design, Internal Water pressure, and Section 19, Concrete Dam Performance, Drainage, Basic Considerations. It is reasoned that the conduits of the bottom outlet works at Massingir dam are essentially an extension of the dam in that they are required to contain the same water pressure as the dam.

In dam design there is some controversy about the magnitude of the internal pore pressures within the concrete [4]. Also, readers may be skeptical about this concept on the basis that although all concrete is porous, to some extent, intact concrete is relatively impermeable. However, joints, cracks and micro-cracks do occur in hardened concrete and the concept of water pressure developing within these flaws is quite comprehensible.

Taking account of hydrostatic pore pressures within the concrete will always result in a more conservatively designed water retaining structure. Also, if a construction joint or a crack that allows the ingress of water pressure should exist, the resulting additional stress in the structure will be catered for.

In spite of carrying out a literature search, no other references to the need to apply hydrostatic pore pressures within the concrete have been found. Instead, all references related to the design of water retaining structures indicate that the hydrostatic pressure should be applied at the face of the concrete. However, Reference 5 clearly states that “this code does not cover dams, pipes, pipelines”.

Lessons to be learned

• If the main tensile reinforcement is to be near circular, sufficient steel to carry the full ring tension should be placed on the outside face. This is in spite of the fact that a finite element analysis of the section may show that the main tensile stresses are at the inside face.

• If the main tensile reinforcement is to be placed near the inside face, the bars should have full cross-overs and anchorages as recommended in Figure 3(b).

• Adequate shear links should be provided.

Rehabilitation of the Massingir Dam bottom outlet works will be accomplished by the installation of 6.4m diameter steel liners in both of the outlet conduits. These will be encased in concrete and will extend from the upstream side of the dam’s core to within the existing steel lined section at the outlet structure.