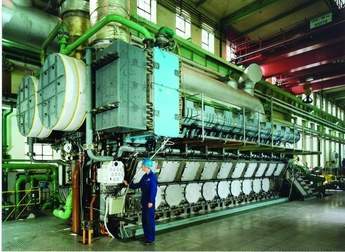 MAN Diesel has further expanded its turnkey diesel power business with the securing of a contract from Fideicomiso Garabito, a trust created by Costa Rica’s state-owned electric power utility Grupo ICE (Instituto Costarricense de Electricidad) and Banco de Costa Rica (BCR). The contract covers the design and construction of a diesel power station at Garabito near the city of Puntarenas in the west of the country. From December 2010, eleven of MAN Diesel’s most powerful medium-speed engine-generators,

the eighteen cylinder, V configuration type 18V48/60, will feed up to 200 MWe into Costa Rica’s national grid. When completed the power plant will be the biggest in the country, constituting approximately 10% of the nation’s total installed electrical capacity. The value of the contract to MAN Diesel is more than 190 million Euros.

Costa Rica is counted among the stable and fast growing economies of Central and South America. At four to eight per cent per year, growth in energy demand has been correspondingly high. To date, Costa Rica has been in a position to cover around 80 % of its electrical power from hydro-electric plants. This is, however, becoming increasingly difficult and the country is dependent on alternative sources of energy, especially during the six-month dry season. To bridge the shortfall Grupo ICE will rely on diesel power stations.

MAN Diesel will equip the plant with exhaust gas treatment systems to meet Costa Rica’s emissions limits and those of the World Bank, relying on the intrinsically clean combustion of the advanced 48/60 four-stroke engine, followed by an electrostaic precipitator.

MAN Diesel‘s ability to offer low emissions, fuel efficient power stations from a single source was the decisive factor in the award of the contract. In both the development of tourism – one of the country’s largest sources of income – and its major national investments, Costa

Rica insists on sustainable solutions and environmental compatibility. For this reason, it is the only Latin American country unwilling to build coal-fired power stations.