Early operating experience with the Lagisza circulating fluidised bed (CFB) boiler – the world’s largest such boiler to date, and also the first one with supercritical steam conditions – has been positive. 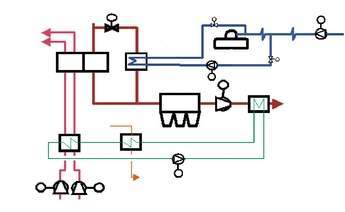 The Lagisza plant, located in the Katowice area of southern Poland, has met or exceeded all emissions and performance expectations since coming online.

Originated more than three decades ago, CFB boilers, which cleanly and efficiently burn both traditional and carbon neutral fuels, have been steadily improved over the years, with the introduction of a number of innovations. The Lagisza CFB, which produces electricity at an efficiency level well above that of typical coal plants, incorporates a number of advanced design features such as compact solid separators, Intrex superheaters, and low-temperature flue gas heat recovery, which captures valuable heat that would otherwise be lost.

The unit incorporates also – for the first time ever in any CFB – Benson vertical once-through technology developed and licensed by Siemens.

The CFB installation at Lagisza is part of a repowering project, replacing two old power blocks of the existing 1960s-era Lagisza power plant, which is owned by Polish utility company Poludniowy Koncern Energetyczny SA (PKE). The existing plant consisted of seven units ranging in size from 110 to 125 MWe each. The new boiler is located adjacent to the two old boilers it is replacing and many of the existing plant systems, such as coal handling and water treatment, have been renovated and reused for the new CFB unit.

Compared with the old blocks, which had an efficiency of 35%, carbon dioxide has been reduced by 28% and NOx by 71%. The emissions from the new plant meet the requirements of the EU Large Combustion Plant Directive (LCPD). The relevant emissions limits are shown in Table 1.

The main fuel for the Lagisza unit is bituminous coal, provided by ten local coal mines, with a wide range of coal parameters – once again demonstrating the benefits of the circulating fluidised bed’s fuel flexibility. The Lagisza fuel data are shown in Table 2.

The boiler design for the Lagisza CFB builds on more than 350 reference units.

The steam parameters for the boiler were specified by PKE. The selected steam pressure and temperatures have been proven in other supercritical units and conventional boiler steel materials can be used.

The calculated LHV net plant efficiency for Lagisza is 43.3% and net power output is 439 MWe.

In the Lagisza CFB boiler, the feedwater enters the boiler at a temperature of 290°C for preheating in a bare tube economiser. Water is then fed to the enclosure walls of the Intrex fluidised bed heat exchangers and further to the distribution headers of the evaporator (furnace) walls. The water is heated in the evaporator wall tubes, and dry steam exits at the evaporator outlet. As the boiler operates in sliding pressure mode, dry-out will occur in the subcritical region, as in all once-through designs, at a certain elevation within the evaporator, causing a reduced internal heat transfer coefficient and locally increased tube and fin temperatures. In CFB boilers, the furnace heat flux is considerably lower than in PC boilers, and the highest heat flux occurs in the lower furnace, where water is always sub-cooled.

From the flue gas side, Lagisza’s furnace design is based on extensive analysis of all the fuels and limestones that are going to be used. These have given the required data input for the design models to make predictions for circulating material particle size distribution, solids densities and finally the heat transfer with gas temperatures. This resulted in a design with a furnace cross section of 27.6 x 10.6 m and height of 48.0 m.

There is a single fluidising grid in the bottom of the furnace under which there are separate air plenums introducing primary air to the furnace. The primary air flow for these air plenums is measured and controlled separately to ensure equal air flow to all sections of the grid and uniform fluidisation. The single continuous fluidising grid ensures simple control as well as a stable and uniform operation of the furnace.

Fuel is introduced to the side walls of the furnace via feeding points giving the same grid area per feed point as used in other boilers. Secondary air is introduced also on long furnace walls at different elevations to provide staged combustion for minimisation of NOx emissions.

Erection works in the Lagisza boiler island were mostly completed by July 2008 and mechanical completion was achieved on 29 August,

exactly according to project schedule. Cold commissioning of the boiler plant started in the middle of the July with the finishing of minor items of erection work still going on. During cold commissioning pipelines were flushed with water, air or steam, while correct operation of the electric motors, fans, control dampers, valves, and instrumentation was verified and loop tests completed. All systems and equipment within the boiler plant were checked after erection works and made ready for trouble free start of chemical cleaning and hot commissioning.

First firing took place on 28 August 2008, followed by acid cleaning, which started on 19 September and was completed on 1 October.

On 13 November the plant was ready for the start of steam blowing. Continuous blow-out was found to be effective and the required cleanness of steam pipelines was achieved on 1 December after just seven blows.

During the steam blowing coal was co-fired with light fuel oil (LFO) in the Lagisza boiler for the first time. A load of ~40% MCR was achieved and furnace temperature increased up to 700°C. Once-through Benson mode was also achieved for the first time during the blow-out process.

Restoration work after blow-out took around two weeks. After finishing all the necessary work, bypass operation of the plant was started, meaning that HP and LP bypass stations were utilised in order to get condensate back to the process and the condensate system cleaned up. In the course of bypass operation, preliminary tuning of the boiler controls and sequences was carried out.

Steam was introduced to the turbine for the first time on 7 February 2009, after which turbine and generator tests were started. This was the first time the boiler was operated with coal alone, without LFO firing, at about 25% MCR. Thanks to the four fuel feeding lines and numerous feeding points boiler operation with coal was smooth and easily adjustable.

The new Lagisza unit was synchronised to the grid for the first time on 15 February 2009. On 10 March it reached its full power output of 460 MWe. The boiler was operated in once-trough mode with supercritical steam parameters, generating 361 kg/s steam (see plot, right). Commissioning continued with fine tuning of the boiler controls and performance prior to start of a 720 h trial operation.

The Lagisza CFB power plant was handed over to customer on 27 June 2009.

It can be said that initial operating experience with the Lagisza CFB boiler has been extremely positive. Over the whole load range boiler has performed as designed and operation has been steady and easily controllable. Basic process parameters at different levels of load are shown in Table 4.

Peak heat fluxes in a CFB boiler are lower than experienced in PC boilers and because of these low heat fluxes, the full load water-steam mass flow rate can be in the 550-650 kg/m2s range.

This low mass flux creates a “natural circulation” characteristic that together with stable circulation of the solids, giving more uniform heat flux distribution, will result in reduced tube-tube temperature differentials.

Based on the analysis results from the Lagisza CFB, heat flux profiles to furnace walls have been low and uniform during coal firing. Due to the uniform heat fluxes to furnace walls, steam temperature variation after the evaporator has been minimal when operating above the Benson point.

The control concept chosen for the Lagisza boiler has also turned out to be a success. The CFB is behaving well in transient conditions and on the other hand all the parameters are stable when the boiler is operated in steady state conditions.

Sound base for scale up

The Lagisza boiler’s general layout was based on the well established in-line arrangement that was employed in units 4-6 of the Turow power plant.

The mechanical scale up represented by the Lagisza CFB was also reasonably modest since the physical size of the Lagisza boiler is not significantly larger than boilers already in operation using lower grade fuels, such as brown coal in the case of the Turow units. And indeed no problems regarding mechanical scale up of the boiler occurred during commissioning. Also, boiler auxiliary equipment functioned without major problems from minimum up to maximum boiler load.

As Foster Wheeler heads for larger boiler sizes and higher efficiencies it is important to collect all possible information from Lagisza to achieve a better understanding of large CFB boilers. As planned, during the boiler commissioning and trial operation phases, a very extensive testing programme was carried out at Lagisza. Performance of the boiler was tested in steady state operation as well as in dynamic conditions and the data generated will be used for validation of the process and dynamic models for large scale CFB.

Overall, initial operating experience with the world’s first supercritical CFB has been excellent. Boiler operation has been stable and easily adjustable while heat fluxes to furnace walls on coal firing have been low and uniform – as was expected. This provides a good knowledge base on which to proceed to supercritical CFB plants of up to 800 MWe installed capacity in the near future.

Meanwhile, a second supercritical CFB, albeit smaller than Lagisza – with an installed capacity of 330 MWe – is currently under construction in Russia, see panel below.