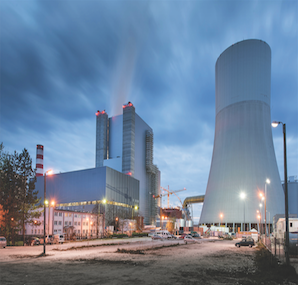 The boiler has been supplied by Mitsubishi Hitachi Power Systems Europe, which has also provided some balance-of-plant items. The steam turbine, generator and associated components, as well as flue gas cleaning equipment, has come from MHPS Europe’s Japanese parent Mitsubishi Hitachi Power Systems, while Polimex-Mostostal of Poland has been responsible for construction and most of the balance-of-plant.

Miroslaw Kowalik, CEO of Enea, which has invested about 1.21 billion euro in the project, said at the ceremony: “This investment shows that there is a place for modern, high-efficient and low-emission conventional power plants, which are using cutting-edge technologies to produce power based on coal, in an environmentally friendly manner.”

The foundation stone for the power new unit was laid on 21 November 2012.

“Construction of Kozienice 11 was MHPSE’s first step in accessing the Polish power plant market”, according to Rainer Kiechl, CEO of the MHPSE Board of Directors.

“Since then we have acquired a further order for constructing the utility power plant at Turow and are also participating in other bid invitations. Poland is clearly a key market for our company.”

During the boiler pressure test the finned tube walls, heating surfaces and piping of the 100 meter high boiler (which contain over 93 000 welds) were filled with water and tested for seal tightness at a 513 bar pressure. The test was verified by UDT, Polish equivalent to TÜV.