How do you manufacture 11 Kaplan turbines for three different customers in 12 months for projects halfway across the globe, while continuing to manage an already full production schedule? That was the challenge faced by Czech Republic-based hydroelectric turbine producer Mavel in South Korea. 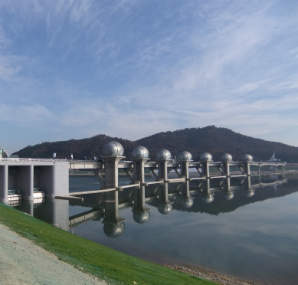 ?The Four Major Rivers Project utilises the Han, Nakdong, Geum and Yeongsan Rivers in South Korea. The project was spearheaded by current South Korean president Lee Myung-bak and was enacted to revitalise the four rivers. Its goals were to prevent water shortages, improve water quality, bolster flood control, and create multipurpose spaces for local residents and regional development centred on the rivers. The Korean Water Resources Corporation owns all the projects.
With awards for specific projects announced in 2009, Mavel won contracts for the Yipo, Gangjeong, Hapcheon, Nakdan and Seungcheon hydroelectric power plants. For each project Mavel was contracted to supply hydraulic engineering and design, turbines, hydraulic units, gearboxes and installation supervision. Contracts were negotiated and signed in early 2010 and combined, these five projects called for the design, production and delivery of all 11 turbines within twelve months.

1) The Yipo HPP was developed under contract to Daelim Industrial Co as the general contractor in cooperation with APEC Asian Power & Energy Corp. The power plant, which is on the Han River, has a nominal net head of 2.28m and total flow of 168m3/sec. Mavel’s scope of supply included hydraulic design, turbines, gearboxes, and hydraulic power units, cooling system and installation supervision. Three double regulated Pit turbines were installed (KP3400K3) with a runner diameter of 3400mm and three runner blades. Each turbine has 1.11MW of installed power for a total of 3.33MW.

3) Hapcheon HPP was commissioned on 10 April 2012 and has a nominal head of 5.11m and nominal flow is 123m3/sec. Mavel provided two double regulated Kaplan Pit turbines (KP3400K4) with a runner diameter of 3400mm and four runner blades. Total installed power is 5.53MW.

5) Gangjeong HPP was commissioned on 31 May 2012 and Mavel provided two double regulated Kaplan Pit turbines. The project has a total nominal flow of 73m3/sec with total installed power at approximately 3.3MW.

Engineering and production
After the initial contracts were signed in March and April of 2010, Mavel’s engineering department began preparation of detailed drawings utilising the latest 3D design software. This first phase was finished within three months. The approval of those drawings came within two months of the handover of the final designs.

The production process was eased by the extent of Mavel’s experience with Kaplan turbines. The majority of turbine equipment supplied by Mavel over the past 20 years has been for Kaplan turbine installations. The company has installed over 250 Pit, Bulb, Z, S and Vertical Kaplan turbines at sites on almost every continent.

This experience enabled production time for the 11 Kaplan turbines of between four and a half and seven and a half months. The turbines were produced at Mavel’s headquarter’s production facility in Benesov, Czech Republic. Located just outside of Prague it houses state of the art production capabilities, including a 5-axis CNC Maho Milling machine. With an already full production schedule, Mavel added shifts to maintain schedules for all projects for all customers.

Furthermore Mavel’s dedicated purchasing department was able to obtain rough-casting forms from a local Czech supplier. Gearboxes and hydraulic power units were also procured from Czech companies. Production time from the notice to proceed with manufacturing to being ready for shipment was within eight months for all five projects.

Mavel’s management team credits the success of meeting this challenge to the cooperation between the engineering, production and supply teams as well as being able to synchronise well with their South Korean partners.

Installation and commissioning
The contracts called for personnel from Mavel’s global services team to oversee the assembly and installation of all Mavel supplied equipment. The timing on the installation and commissioning of the equipment was driven by the readiness of the civil construction and so Mavel personnel were on call to assist their local counterparts in South Korea for over a year.
Mavel commissioned both the Yipo and Seungcheon hydroelectric power projects in late 2011. The last three sites, Hapcheon, Nakdan and the Gangjeong HPP were commissioned in the first half of 2012.

While the challenge of communicating with customers of different languages and cultures is not new to Mavel, working in a new market and building customer trust under such time pressure could have been much more difficult without commitment and co-operation from all parties.

Mavel met the challenge, and today there are 11 Mavel turbines supplying 16.2MW of power in South Korea. Mavel puts successful project completion down to the following points:

¦ Its Kaplan turbine, engineering, production, project management and global service experience allowed Mavel to increase volume and meet tight delivery requirements with relative ease.
¦ The organisational skills of the three customers in South Korea allowed for timely procurement of equipment and efficient civil design and construction for installation readiness.
¦ Both Mavel and its customers were flexible and committed to working together as partners to complete the projects within tight time schedules whilst maintaining the highest standards of quality.