Kingsnorth: start of a new era?

If E.On’s proposals for two new units at Kingsnorth go ahead on the currently planned schedule they would be the UK’s first new pulverised coal fired projects for over 20 years, and the country’s first modern supercritical systems. 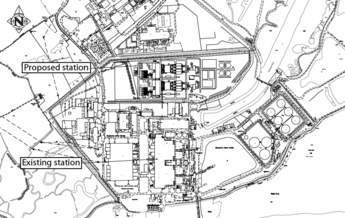 On 11 December E.On submitted a “Section 36” application* to the government to build two 800 MWe units at Kingsnorth – putting it a little bit ahead of RWE and its Tilbury project, for which a scoping document, the precursor to a Section 36 application, was submitted on 13 March (see p3).

The projects potentially mark the beginnings of a major technological transition for the UK: the shift to supercritical new-build. All the country’s existing operating coal plants are subcritical, of 1970s vintage or older. The UK’s only supercritical plant to date, at Drakelow (another E.On site), has a chequered history. The two units, which operated from 1967 to 1978 and 1995, respectively, have now been demolished.

Dr Paul Golby, Chief Executive of E.On UK, said that “while many of our competitors are retrofitting clean up kit on power stations that are over 30 years old, we want to build new, more efficient units that will set a new benchmark for cleaner coal-fired generation in the UK”, claiming that E.On was the only UK power company to have made “a commitment to reduce the carbon intensity of [its] generation – by 10% [from 2005 levels] by 2012 – and we believe that building new, state-of-the-art power stations is the best way forward for us at E.On and for the country as a whole.” The company says it has already reduced the carbon intensity of its generation by 20% since 1990, largely thanks to increased gas-firing.

The new, supercritical, units – with steam conditions of 280-300 bar/600ºC superheat/620ºC reheat – would be built next to the existing four 485 MWe subcritical units at the Kingsnorth station, which have steam conditions of 180 bar/565ºC. These were built by the CEGB in the late 1960s/early 1970s and commissioned over the period 1970-73. They are therefore well into their fourth decade of generating electricity (clocking up around 200 000 operating hours each) and are coming to the end of their useful lives.

The existing station has been opted out of the Large Combustion Plant Directive, so will be limited to 20 000 hours operation post 2008 and must close by the end of 2015.

The plan is that the new units, Kingsnorth 5 & 6, would come on line in 2012/13 and the existing units would then be shut down and subsequently demolished.

A typical high efficiency supercritical coal-fired plant of the type planned for Kingsnorth can offer efficiencies of 45% or higher, especially if seawater cooling is employed, as proposed at Kingsnorth. In contrast, most existing, sub-critical, coal-fired plants built in the UK during the 1960s and 1970s (including the existing Kingsnorth units) have operating efficiencies which are unlikely to exceed 37%, especially in plant which has seen extensive operation.

The new units are also intended to be carbon capture ready, with the possibility of storing captured carbon dioxide in a depleted North Sea gas field.

They will also be fitted with selective catalytic reduction – another potential first as no UK plants are yet employing this technology – as well as flue gas desulphurisation, employing limestone slurry. The resulting calcium sulphate (gypsum) would be exported from site for use in applications such as plasterboard manufacture.

It is anticipated that both the limestone and gypsum would be transported by river barge into the Long Reach jetty, which will be upgraded.

Dust will be removed by electrostatic precipitators, with a removal efficiency of about 99.8%. The dust collected will be temporarily stored on site in covered silos and then transported by road for use in the construction industry or disposal in landfill

In addition the plants will be capable of co-firing biomass. Biomass is burnt with coal in the existing plant, reducing the emissions per unit of electricity. Subject to the outcome of the review of the Renewables Obligation currently underway by the UK government and providing suitable biomass is available, the new plant will be designed to burn a proportion of biomass with the coal similar to that already achieved on the existing units.

Water supply is becoming a real issue in the south east of England and E.On therefore proposes to build a desalination plant to provide the power station with water for operational processes.

Kingsnorth is located in north Kent, on the bank of the River Medway, near the village of Hoo St Werburgh, 11km north east of Rochester.

The intended site of the new units is to the north of the existing power station, occupying around 14 hectares adjacent to the existing buildings.

Coal will continue to be delivered to site by boat and unloaded via the Long Reach jetty, from where it be moved by conveyor directly to the boilers or stored on the coal stockpile. The existing conveyors will be replaced and the Long Reach jetty overhauled to be suitable for the life of the new units.The stockpile can hold 1 million tonnes of coal allowing variations in electricity demand and coal supply at different times to be managed.

Power will be generated at 22 kV and then boosted to 400 kV for transmission.

Two new 50 MW oil-fired open cycle gas turbines will be installed to replace those attached to the existing units. These will provide black-start capability and can also be run at times of very high demand.

For cooling the new units will use a direct system similar to that used on the existing plants, with river water circulated through the main condensers via the existing intake and outfall structures, which will be retained, thus minimising offshore civil works and construction impacts.

Among the advantages of direct cooling relative to alternative methods are high power plant efficiency, lower visual impact than cooling towers (the next most efficient method), and no vapour plume. The water for cooling will be abstracted via the shoreline intake and the same volume, at a higher temperature, will be discharged via the outfall structure in Damhead Creek.

The changes in air quality predicted to result from the new units have been assessed against relevant air quality objectives set out in the Air Quality Strategy (AQS) for England, Scotland, Wales and Northern Ireland, and to a guideline value set by the World Health Organisation (WHO).

This has been compared to the existing situation for Kingsnorth with the combined impact of the existing units and existing background concentrations having also been compared with the Air Quality Strategy objectives and World Health Organisation guidelines. Worst case meteorology and emissions have been assumed in both studies.

Not surprisingly, the results show that the new units will emit significantly less emissions to the environment compared with the existing units. This is due to the higher efficiency and the use of the latest available emissions control technologies on the new units.

Overall, the cooling water discharge from the proposed new units, operating both alone and in combination with Medway Power and the proposed Grain CCGT, is not expected to have a significant beneficial or detrimental effect on the water quality of the estuary or the integrity of Medway Estuary and Marshes Special Protection Area.

In addition to an increase in temperature of the aqueous discharge above the ambient temperature, chloride and trace elements, there may be residual chlorine present at the discharge point. This may occur when chlorination is performed periodically to act as a biocide in the cooling water system. Any dosing regime will be based on past operating experience and will be such that no significant release of residual biocide will occur at the cooling water outfall.

An assessment of the discharge from the FGD waste water treatment plant shows that under design conditions, all trace element discharges can be considered as insignificant. All process contributions at the outfall (the concentration in the CW discharge caused by the FGD waste water treatment plant) are below 1% of the relevant Environmental Quality Standards and Environmental Assessment Levels.

The environmental noise climate around the Kingsnorth site is currently subject to 24 hour contributions from the existing four units, Damhead Creek Power Station and noise from local traffic during day/evening periods.

In addition E.On plans to consult widely on a boiler house design that minimises visual impact in the surrounding landscape.

The new £1 billion project would form part of a multi-billion pound E.On power generation investment plan in the UK that includes: new combined cycle units at the Isle of Grain in Kent (which received government approval in October, with construction due to start in May) and at Drakelow; a feasibility study into a 450 MWe IGCC demonstration plant with carbon capture at Killingholme; building of the UK’s largest dedicated biomass power station, at Steven’s Croft, Lockerbie; and development of wind both onshore and offshore, including participation in the proposed 1000 MWe London Array.