In the worst case scenario, jacking failure can cause an offshore rig to collapse but, until recently, the industry has struggled with the maintenance and inspection of jacking systems. Elly Earls meets DNV GL’s Michiel van der Geest to find out why things are now improving and what more needs to be done. 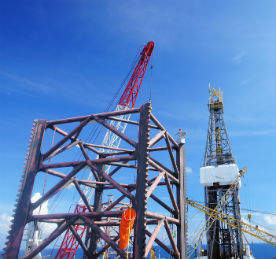 Although the consequences of jacking failure can be catastrophic from safety, operational and environmental perspectives, there are several unique challenges associated with the maintenance and inspection of these crucial systems. As a reaction, the offshore jack-up (JU) segment has really started to take a proactive and collaborative approach to the issue, exemplified by a recent Joint Industry Project (JIP) led by international certification body DNV GL, which, in 2014, resulted in a comprehensive Recommended Practice (RP) for operators.

Jacking systems, which consist of a set of simultaneously operating jacking gears, and allow the lifting and lowering of offshore self-elevating platforms, are one of the essential components of self-elevating units or jack-ups. Not only can their failure result in expensive downtime for operators, as an unserviceable jacking system prevents the entire unit being relocated, but a malfunctioning system can also put the entire unit in danger.

"When a unit loses stability in an elevated or partly elevated condition, it might collapse or become prone to wave impacts," explains Michiel van der Geest, DNV GL’s offshore class product manager. "Such worst case scenarios are major incidents that can cause loss of life, property damage and environmental pollution."

Despite the potentially dire consequences of jacking systems’ failure, however, for decades, the oil and gas industry has been beset with difficulties when it comes to their maintenance and inspection. Not only is there a high turnover of people in the industry with specific knowledge of these systems but the intermittent use of jacking systems means they tend to be thought of as a secondary focus when compared with their drilling counterparts.

As Van Der Geest elaborates, "Once in position, all the crew’s focus will be on the drilling, and there is hardly any focus on the jack-up system. Hence, the day-to-day build-up of experience is low or even non-existent. Indeed, often, a specialised crew has to be flown in for JU operations.

"Moreover, we have observed an important technical development from robust analogue systems towards a new generation of systems with digital/software-based control. Even though these bring great advantages, they do add complexity, making full understanding of the systems less straightforward."

Finally, progress
In 2013, DNV GL decided to take a proactive approach to solving the challenges associated with the maintenance and inspection of jacking systems, in the form of a JIP in collaboration with Rowan Drilling, Seadrill, Prospector Drilling, Noble Drilling and the UAE’s National Drilling Company, as well as service suppliers Energy Service International and WillTeco, and Cameron Letourneau, the vendor.

The aim? To pinpoint the industry’s key challenges and come up with practical guidance to improve things. The outcome? A comprehensive DNV GL RP, published in 2014, proposing several key measures to ensure the correct and safe functioning of rack-and-pinion-style jacking systems, with the aim of reducing costs and increasing assets’ availability throughout their lifetime.

"The existence of our RP and the engagement from all different industry players in our JIP prove that the industry in general seeks further improvements and is supporting the drive."

Some of the key measures agreed upon include: clear definitions of competency levels in order to support knowledge transfer between the different roles involved in jacking system inspection and maintenance; clear definitions of the inspections that can be executed by the on-board crew and those that should be covered in periodical surveys by experts; clear guidance on what information the operators and OEMs need to provide in the form of user and maintenance records; best practice for the selection of spares; and a detailed overview of specific components, including a short description of their functionality and the consequences of failure.

For Van Der Geest, these measures were all absolutely necessary, particularly given the time pressures on offshore oil and gas workers. "Knowledge transfer is challenging and not always straightforward," he notes, citing one example.

"Think about regular crew changes with limited time for a line-up and the jacking up/down operation itself, which is always under time pressure."

"In addition, keeping good operational records is a challenge. The effort of making these is a perceived additional burden that tends to be forgotten [after a busy day with challenging operations]. Moreover, it is not always clear what records have to be made and when, and it may be unclear why the records are needed since one of the benefits of having them is tied to the long-term maintenance of your system," he continues.

"It was for this reason that we paid a lot of attention to the topic in the RP, not only describing the ‘why’ – to increase understanding – and the ‘when’ – not only during normal jacking but also when you reach ‘extraordinary’ operations where you are close to the system’s design limits – in addition to the ‘what’."

Better together
The time and effort that went into creating the new recommendations has paid off, if industry feedback is anything to go by.

"The existence of our RP and the engagement from all different industry players in our JIP prove that the industry in general seeks further improvements and is supporting the drive," Van Der Geest notes. "We also know that inspection schemes and procedures are being reviewed and updated based on the recommendations."

Indeed, at DNV GL’s service centre in Dubai, after the publication of the RP, Van Der Geest recalls one particular incident where the first thing a customer did before even opening the discussion about jacking system inspections was pull out the RP, making it clear where he wanted to start.

"This shows how our RPs are seen to increase operational excellence, and support and inspire the industry," Van Der Geest remarks, adding that DNV GL couldn’t have come up with the recommendations alone.

"We need the contributions and insights, as well as the engagement, of all our industry partners," he stresses. "It is not as simple as we define a new regulation and enforce something by just making a simple check every five years. Rather, it’s all about having a common understanding of each other’s positions, capabilities and also limitations, and having a common drive to improve our industry practices."

It’s a similar story with every one of the more than 100 JIPs DNV GL manages each year, adding to its openly accessible library of more than 170 industry standards, recommended practices and technologies. But Van Der Geest would never claim it’s an easy process. "Forgetting your business card and playing open card requires courage and willingness, but that is exactly what we put in place when we came together in this project, similar to the experience of the majority of our JIPs in DNV GL.

"The jacking operation JIP proves our concept, and the industry can be proud of the outcome, which will secure safety and help to manage cost. We believe in JIPs because, time and time again, we have seen what impressive results we, as an industry, can get when we work together."

Next steps
The RP won’t be the end of the story; since it was published, DNV GL and its industry partners have already arranged experience-exchange sessions in major oil and gas industry hubs worldwide, and have actively been seeking input for the further development of the document in cooperation with other industry bodies.

According to Van Der Geest, feedback from these events has so far been encouraging. "The discussions we’ve had have directly given us some areas and ideas in which we can improve the content of the RP," he notes.

"For example, the most specific and challenging area that’s been brought up is the unclearness in the industry on how much wear and tear we can accept on the jacking system before experiencing negative consequences."

While this was a topic that had already been discussed at length during the initial JIP, these extra discussions have given the team the impetus they needed to go into more depth on the issue. In fact, the feedback ultimately inspired the team to launch another JIP, specifically focused on wear-and-tear acceptance limits, which was launched at the Offshore Jack Up Middle East Conference in Dubai in 2015.

And Van Der Geest hopes that if the industry collaborates on the wear-and-tear topic as effectively as it did during the initial jacking systems JIP, the results could be similarly impressive.

"I believe that DNV GL can play an important role here to enable the industry to become more efficient without compromising safety and sustainability. When the industry is tightening belts, we at DNV GL will continue investing 5% of our revenue in research and innovation programmes, which the JIPs are part of, to help advance the industries we serve."