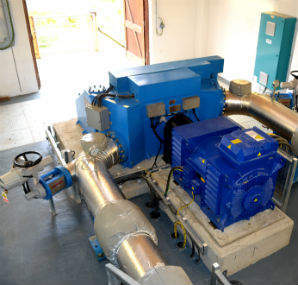 Welsh Water’s Bryn Cowlyd water treatment works lies in Conwy County, North Wales. It is here that renewable energy advisor Dulas, was commissioned to provide a turnkey new build hydro solution for the Bryn Cowlyd Water Treatment Works. As a trusted supplier, Dulas has to date provided over 12MW of operation and maintenance work across 16 sites on behalf of Welsh Water, a utility that provides water and sewerage services to homes and businesses throughout Wales.

Hydro is one of the major contributors to Wales’ renewable energy mix, and the Welsh Government aims to develop its hydro capabilities into a 22.5GW offering by 2025. However, following cuts to feed-in tariffs last year, the UK’s hydro sector has faced a challenging environment, limiting the number of new projects developed since the beginning of 2016.

From the outset, Dulas’ work at this particular site consisted of two plants – Bryn Cowlyd Upper and Bryn Cowlyd Lower – which were essentially identical in their aims and scope. A highly innovative project, the scheme saw Dulas conduct feasibility studies and consenting tasks with the objective of securing planning consent for two 200kW hydro power plants. The team then carried out the implementation, procurement and construction required to complete each, with the first completed in 2014, and the second following late last year.

At the upper site, an existing building and the underground tank it housed had to be demolished to make way for the a slightly larger structure, housing both the hydro plant and a new ‘inside’ tank. The two tanks at the site were connected by a DN600 pipe and the existing float-operated angle valves were serviced, repaired and fitted with revised ball and lever assemblies. A new, underground, branch pipework system was connected to the raw water mains to supply the hydro plant, and electrically-operated emergency shutdown valves were installed on the CI and DI raw water mains.

The second (lower) installation was a particularly delicate operation, as the hydro plant had to be incorporated into the existing operational break pressure tanks, which form part of the 4km long stretch of water mains that feed raw water from Llyn Cowlyd Reservoir to the Cowlyd Water Treatments Works near Dolgarrog. These open-top tanks relieve the pressure that naturally builds up in water pipes that run downhill, reducing the need to increase the strength and wall thickness of pipe on the outlet side of the tank.

In turn, the break pressure tanks serve the two parallel raw water pipes that supply the treatment works. One of these, made from cast iron, was originally installed in the 1920s; the second is a more recently installed ductile iron water main. In order to better protect both these raw water mains, Dulas designed and created a surge protection relief system.

Dulas likewise designed and installed the hydropower plant in a custom-made structure, which also accommodated one of the two break pressure tanks. The hydropower plant itself comprises a Gilkes twin jet, high capacity Turgo turbine, induction generator and hydro control cabinets, as well as instrumentation and hydraulic valves. The control panel, which was again designed by Dulas, was supplied by Bridges Ltd. An integrated fail-safe system was also installed to ensure that the water supply to the water treatment works is not interrupted. It does so by working in parallel with float-operated valves that respond to fluctuating demand at the works and control the level of discharge from the site.

Should the hydro fail or require maintenance, any excess water is automatically routed through a bypass system in the works, ensuring a reliable and secure supply of potable water into the distribution network.

Restrictions on when the final pipework connections could be made extended the time taken to complete the scheme, but the design and construction to accommodate the tanks – which was the technical challenge facing the team – was achieved within seven months. The team needed to be flexible in terms of when work on the site could take place, and Dulas worked closely with Welsh Water to plan shutdowns or reduced flow periods to enable the new pipework connections, minimizing the amount of disruption caused. As a result, there were no additional delays beyond the planned works shutdowns of the site, each of which were no more than five hours in duration.

One final obstacle to the success of the scheme lay in the site’s remote and mountainous location. Access to the site was only available via a steep slope, and conditions quickly deteriorated with the onset of inclement and wintry weather conditions. While this added a further degree of logistical and engineering difficulty to the team’s work, Dulas managed the location risks with thorough H&S management systems, good welfare provision and careful traffic management.

Following completion of the primary construction and installation, the team provided further development of the local infrastructure in the form of an improved main access track leading to the plant, and landscaping of the site following the project’s completion. Connection to the grid was facilitated by extending the 11kV grid spur to the site via a buried HV cable. This terminates at an ‘H’ pole-mounted transformer located just outside the site perimeter fencing. Finally, and as part of Dulas’ commitment to environmentally sensitive development solutions, a bat loft and kestrel boxes were incorporated into the powerhouse roof at the Upper site, helping to support wildlife conservation in the area.

Since completion and commissioning, the scheme has provided near-continuous, 24/7 power generation. Unlike run-of-river schemes, whose performance is affected by rainfall, Bryn Cowlyd’s two hydropower plants ensure a more consistent supply of 400kW’s worth of hydroelectric power.