Innovative construction methods are being used to build the Olmsted Dam on the Ohio River in the US, writes Bruce Bennet 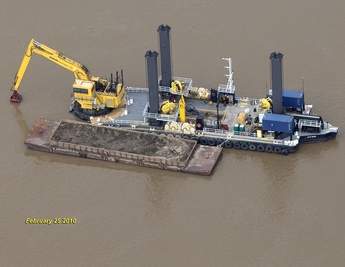 The construction of Olmsted Dam, now underway, is one of the largest civil work projects undertaken by the US Army Corps of Engineers (USACE). URS is constructing the 2700ft-long concrete dam across the lower Ohio River using an innovative “in-the-wet” method, eliminating the need for cofferdams or diversions on one of the nation’s busiest inland waterways.

The public had expressed concern about the project since 95 million tons of goods are shipped through this reach of the Ohio River every year, more tonnage than at any other place in America’s inland navigation system. Delays in shipments on the waterways would result in an increase in the price of commodities. When the project is completed, total lockage time will be reduced from five hours or longer depending on wait times to less than one hour.

The use of in-the-wet construction was just one of numerous challenges that had to be met in designing the project, which is part of a USACE program to replace deteriorating locks and dams, some of which date back to the 1920s. Other innovations devised specifically for this project include:

• Development of the world’s largest gantry crane of its kind capable of picking 5,300 tons.

• Special grout mat to prevent the river bed foundation from being scoured away during construction.

• An aqua digger that excavates at depths up to 85 feet into the river using real time kinetic GPS location equipment.

• Designing a system of 500 sensors built into the bottom of the concrete shells to identify any void areas needing additional concrete after tremie (underwater concrete) is placed under the dam segments when they are set on their prepared foundations in the river.

• A pile-driving template, created to drive piles 60 feet down into the river bottom through 60’+ running river and still meet 1 ¾-inch tolerance.

Early in the project USACE designers determined that the originally conceived sleds, upon which the major precast elements of the dam were to be cast and moved, were under-designed. Initial redesign studies indicated that improved sleds would increase the cost significantly. The URS team proposed and implemented an alternative method for casting and moving the sleds using a 5,100-ton-capacity super gantry crane, circumventing any cost increase.

The gantry crane was the largest of its kind in the world, its components including the largest (1,000 ton) strand jacks ever employed. After lifting the concrete shells attached to a lifting frame, the shells are transferred nearly one-quarter mile from the casting yard to the edge of the river where a 5,000-ton catamaran barge of similar capabilities transfers the concrete shells in the river to their permanent place at the dam. The catamaran barge is also the world’s largest.

A new concept was developed to prepare and preserve the river floor for installation of the precast concrete shells despite heavy river flow. In addition to the mat itself, a plausible way was developed to transfer the extremely heavy grout mat to the river for placement on the bottom of the river using GPS and sonar.

The grout mat is a five-inch thick, 275ft long, 27ft wide concrete mat that is rolled up on a spool on land and then unrolled on the bottom of the river to protect the sub-grade. The fully rolled spool of grout mat weighs approximately 275,000 pounds and has a diameter of 15ft. A total of 94 mats are required over the entire footprint. As a result of these innovative techniques, the grade work could be performed years prior to the shell setting while assuring protection through the high water river’s seasons.

A barge-mounted aqua digger, one of only two like it in the world, excavates at depths up to 85ft into the river using GPS. This new technology allows the operator to control the digging within accuracy of two inches.

When setting large concrete shells under the water, it was difficult to see through the murky water of the Ohio River. Nonetheless, the shells must be set in place to within a 1-inch tolerance horizontally and ½ -inch vertically. The tight tolerance is necessary to facilitate the shell setting correctly on the foundation piles, matching up with numerous master piles and with the previously set shells. To achieve the necessary tolerance, URS used a combination of RTK (real time kinetic)-GPS, dual axis and inclinometers, one second robotic total station survey instruments, and 3-D modeling. In addition, mooring winches, snubbing winches, and hydraulic cylinders were installed in strategic locations to move these shells into location and resist river currents.

Placing tremie (underwater) concrete between the foundation and the concrete shells segments under water to bond the shell to the 120, 24-inch diameter foundation piles was complicated by lack of access and visibility. It was necessary to determine that the entire space was filled, allowing no voids in the tremie concrete. To achieve that aim, engineers designed a system with 500 sensors located under the concrete shells. The sensors send a puff of air into the area, and based on the resistance recorded on instruments, they can tell if the end of the sensor is in concrete or water thereby determining if any areas need additional tremie concrete.

A pile-driving template was created to drive piles 60ft deep into the river floor through the running river and still meet the required 1 ¾ tolerance. This innovative template increased accuracy and efficiency. Verification of accuracy is measured by direct and remote sensed targeting using GPS and inclinometers.

Olmsted Dam construction involves the production of 36 precast concrete shells, the largest of which will weigh more than 3500 tons. The shells, which are 100ft wide, 100ft long, and 30ft tall, are lifted by a super gantry and moved to a cradle on an inclined rails system that allows the shell and cradle to be lowered into the river. Once the shell and cradle are in the river, a catamaran barge will lift the shells off the cradle and transport them in the river to where they will be lowered onto their respective foundations.

The shells will be set under water on a prepared bed of select fill – drainage stone, articulated grout mats and foundation pipe piles. Once the shells are in place, tremie concrete will be pumped into the annulus area under the precast shells to form a continuous bond between the foundation pipe piles, rebar, and the surface shell tying everything together structurally. The work to construct the Dam involves in-the-wet construction of the tainter gate shells, navigable pass shells, tainter gates, and boat-operated wicket gates.

Excavation operations in the river are automated using RTK-GPS, sensors, dredging software customized for the Olmsted project, and a wireless network. All excavations, from up to five excavation barges, are monitored by a URS engineer over the wireless network at a control station to verify that excavation and rock placement are performed in accordance with the project specifications. The network, which can be monitored by USACE construction representatives, allows the barges to be positioned safely in relatively tight working areas.

Communicating the right information at the right time was a critical element during the course of the complex project. To facilitate the process, a wireless local area network (WLAN) was installed at the site. Using high-frequency radio waves, rather than wires, a free-standing tower on the Illinois bank acts as the switchboard for all signal transmissions. Each work location or piece of equipment in the water, is set up to send and receive data.

In the water, the WLAN feeds real-time survey data to GPS receivers located on:

• Five excavation and pile-driver barges. During the various phases of riverbed preparation, each barge’s position and orientation, relative to the dam footprint, is displayed in the barge cabin. An additional display, located on each piece of equipment, lets the operators see underwater to where they are digging or driving pile.

• One catamaran barge. During operation, data is regularly exchanged so that shells can be correctly placed in the river. The barge position and orientation, relative to the shell footprint, is displayed in the barge cabin.

• Two tug boats. The tugs are used to position all of the barges. Tug captains need to know exact GPS survey positions to correctly move and position the barges.

Meeting the needs of growth

The Olmsted Dam project is part of a USACE program to replace deteriorating locks and dams, some of which date to the 1920s. The new Olmsted Dam anticipates and meets the growing needs of the area. The continuing growth in demand for water-borne commerce on the Ohio River requires periodic improvements in the waterways transportation infrastructure. The project provides a 9ft deep, year-round channel for navigation that will allow traffic on the river to lower from elevation 710 at Pittsburg, Ohio, to an elevation of 270 above sea level at Cairo, Illinois, dropping a total of 440ft.

The locks and dams that will be replaced, built in 1929, are antiquated in design and have experienced significant erosion over the years that have made it impossible to meet current traffic demand without significant delays. The new locks will operate more efficiently and will pass tows with fewer delays. Delays ultimately raise the price of commodities that move on the waterways. Estimates are that the new dam will produce savings of more than $800 million a year while fostering growth in this critical area for the better part of the 21st century.