Good teamwork was the key to a successful refurbishment project on a cracked surge shaft liner at Middle Fork hydro project in the US. Black & Veatch were one of the project partners who helped undertake the work without dewatering the surge shaft and tunnel 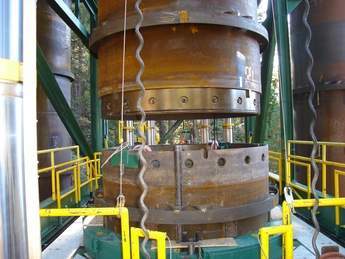 In 2007 an innovative refurbishment project was completed at the 122MW Middle Fork hydro power project, on the American river in California, US. Rehabilitation of the cracked concrete lining on the 3m diameter surge shaft was carried out under water. This was quite an accomplishment and is thought to be the first time that such work has been undertaken in the US. Furthermore, it was also completed under budget and ahead of schedule.

Key to the success of this project was the effective collaboration between all members of the project team. These were:

The 224MW Middle Fork hydro project was completed in 1967. Part of the project consists of the Middle Fork powerhouse and associated facilities including Hell Hole dam and reservoir, two diversion dams and shafts, a tunnel, surge shaft and penstock.

Two incidents spanning over 20 years led to the need for the refurbishment project. In 1975 major rock falls caused unusual tunnel head loss. Consequently the 17km long Middle Fork tunnel was drained, repairs were carried out and the system put back on line in 1976.

Although unknown at the time, the 183m deep surge shaft had longitudinal cracks in the original unreinforced concrete liner. This, combined with the effect of a major storm, resulted in a landslide which filled the Middle Fork interbay with sediment. On 1 January 1997 the turbine/generator units in the powerhouse became inoperable.

The generating units themselves were not significantly damaged by the flood, since the stoplog gates were closed before the flood peak. However, sediment deposition in the afterbays of the Middle Fork powerhouse and the downstream Ralston powerhouse resulted in an extended shutdown. This enabled the removal of sediment using large skip and clamshell equipped cranes under emergency conditions.

Since the Middle Fork project powerhouses are basically in series, most project generation was shut down for well over a month. However, due to the time of year with relatively low power values and a dry period following the flood, impacts to generation were minimised. Several million dollars were spent in emergency work and later planned sediment removal projects.

As part of FERC’s dam safety programme, the regulatory body required that the project owner’s FERC-authorised dam safety consultant address these issues, specifically as the tunnel and surge shaft were part of the outlet works for Hell Hole dam and reservoir.

The consultant recommended that studies be performed to identify the issues and ultimately fix the problem within a certain timetable. PG&E concurrently was performing the necessary studies. FERC stayed intimately involved through the study phase, job planning and construction. As part of the FERC licence conditions for operating and maintaining the Middle Fork project, FERC was the ultimate authority for granting authorisation to proceed with construction of the project. It also had to ensure that all the necessary engineering, safety and environmental work had been performed, and that the appropriate resource agency approvals had been obtained.

It proved to be a lengthy process trying to identify and fully understand all of the issues, including tunnel sediment production, slope stability and whether the hillside leakage was even related to the tunnel or surge shaft.

It also took several years to fully develop a programme to analyse the groundwater patterns and slope stabilities, and to assess the condition of the tunnel through state-of-the-art ROV underwater inspection. Due to the size and unique nature of the problem, expert consultants were retained to review the study and design process. Testing of multiple design solutions, changing to a design-build type of engineer/contractor arrangement mid-stream to address design and constructibility issues, and extensive pre-construction testing of design solutions also required time to implement.

The go ahead to proceed with the refurbishment work was received in January 2007, almost ten years after the second incident.

The primary purpose of refurbishing the surge shaft was to control leakage; lowering groundwater in the adjacent hillside to pre-project elevations. In addition it was also necessary to stabilise the existing cracked lining to prevent concrete debris from falling into the tunnel and causing damage to the downstream turbines.

The option of dewatering the Middle Fork tunnel to carry out repairs was considered to be too risky. The actual dewatering process could cause further tunnel deterioration and increase the possibility of costly repairs. So PCWA and PG&E investigated a way of sealing leakage in the surge shaft that could be carried out under water.

Several options to mitigate or reduce the groundwater level in the hillside were investigated, and included extending a concrete back-filled shaft steel liner from the surface down to the competent Shoo Fly geological complex. This proved to be the preferred alternative as the others were likely to be impractical without dewatering the shaft, unlikely to perform adequately, or entailed considerable risk.

Since the 185m deep surge shaft is normally full of at least 152m of water, and only the bottom 32m of shaft lies within competent rock, a 166m long steel liner would provide approximately 15m of interface between the steel liner and the surrounding competent rock. This interface was used for bottom annulus seal and support of the liner. The steel liner would offer various advantages such as: carrying out installation without dewatering the shaft; providing an impermeable barrier – blocking flow through the weak and permeable Mehrten Formation in the geological profile of the site; stabilising the existing cracked concrete lining; correlating the construction schedule with the scheduled outage planned for rehabilitation of the generators at the Ralston powerhouse, which is also part of the Middle Fork American river hydro scheme.

Features of the final design for the surge shaft liner system included a 2.4m diameter, 168m tall steel liner which was installed within the 3m diameter shaft. The steel liner segments were shop-fabricated with stiffening rings and other appurtenances.

The 0.3m wide annular space between the new and existing lining was backfilled with tremie concrete for the full height of the steel liner, thereby forming a barrier to water entering the existing cracked concrete lining. A multi-faceted instrumentation system was installed on the liner assembly to monitor movements and stresses throughout the liner system and during backfill operations.

There are several components of the project design which the project team are particularly proud of. These include:

• The mechanism for holding and lowering 18m sections of the steel shaft lining. This worked as intended, allowing the steel liner sections to be coupled and sealed, and set to precise elevation. Since this mechanism bridged over the surge tank, construction was started while the powerhouse was still operating, saving a season of construction time.

• The use of packers (inflatable doughnut-shaped rubber bladders developed for off-shore oil platforms). These were used to seal the annulus at the bottom of the new steel liner and prevented the initial concrete backfill placements from leaking down into the shaft and tunnel, causing a serious water contamination event.

• The use of mechanical connections on the steel liner segments instead of field welding saved a lot of construction time and allowed the use of better shop-applied corrosion protection. Precision survey of the shaft using sonar, ROVs, and conventional survey allowed the shaft liner and rubber seals to be designed to fit into the irregular shaft shape without incident. In addition, all major components of the liner were tested in full scale mock-up to ensure any difficulties were discovered and corrected before final installation. As a result, the entire shaft liner installation operation was completed without incident.

In hindsight was there anything in the design, construction or planning processes that the project partners think could have been done differently or more effectively? James Richter, senior structural engineer at Black & Veatch says: ‘While some minor components of the project, such as using longer segments of steel liner to reduce the number of couplings could be discussed, the important outcome of the project is that the strong verification testing programme for the design and construction methods prevented there being any major incidents or issues that could be discussed here.

The best way to reduce the shaft leakage and to stabilise the cracked lining was to complete the installation of the new steel shaft lining. Once this was done, shaft leakage was significantly reduced. The cracked original lining was no longer a concern as the new steel shaft lining, with its tremie placed concrete backfill, stabilised the existing cracked concrete lining. Consequently the project goal of significantly reducing leakage from the Middle Fork surge shaft, thereby reducing the possibility of landsides on adjacent hillsides, had been achieved. Evaluation of piezometer readings taken before and after installation of the new steel liner in the surge shaft showed a significant reduction in groundwater levels and leakage from the surge shaft – over 75% reduction: 500 gpm to less than 125 gpm.

‘It was a very challenging project both to design and construct,’ says Richter. ‘Working as a team as opposed to a group of advisories with different goals added a great deal of satisfaction to all parties when the project was completed with all goals met, under cost budget and within schedule constraints.’

Richter believes that credit for the great team work exhibited on the project has to be placed with PCWA and PG&E. They recognised that this project required an ‘alliance’ type of construction contract, and a degree of risk sharing by the project owners and financiers to help minimise disputes and keep everyone focused on the project success. Furthermore, weekly conference calls where all team members were asked what issues needed input from the team provided valuable communication and kept everyone focused.

All of the project team would agree that it was a very daunting task to take on such a unique project that did not have a previous model to follow. The technical challenge of successfully undertaking such repair work under water was a great accomplishment for all involved. The project team would confidently recommend that the design and installation methods be considered where applicable for other surge shaft refurbishment.