For decades satellites have been crucial tools in the coordination of offshore oil and gas operations. Now, as the prices of those commodities remain at record lows, their capabilities and applications afforded by space-based communications are undergoing a renaissance. Greg Noone talks to Aarti Holla-Maini, secretary-general of the European Satellite Operators Association, about how the sector is using satellite telecommunications to optimise processes and drive down costs. 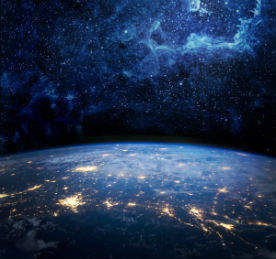 Life on an oil rig is necessarily lonely. Standing atop its steel boardwalks hundreds of miles from shore, there’s rarely anything of note to see between the choppy ocean waters and the flat horizon. There’s only the work, and after that, a few distractions to keep one occupied in the hours following.

‘Distractions’ is somewhat of an understatement. On some of the more established offshore rigs, space is found for anything from private cinemas, gyms, television rooms and, on select North Sea platforms, saunas. Yet only since the mid-2000s have personnel begun to enjoy the benefits of a consistent internet connection and, more recently, broadband. Although all of these mod-cons can merely sustain up to a point the sense of a home away from home, the gulf between the steel dormitories in the bowels of the rig and the comforts of civilisation has been bridged a little more by the light of a laptop computer.

For the most part, this has been made possible by the oil and gas industry’s enthusiastic embrace of satellite telecommunications. Its transformative effect has not been solely confined to crew welfare. In fact, satellites have become the eyes, ears and nervous system of a sector that largely stands apart from national phone and broadband grids. As long as it has the hardware to match, companies can now easily accomplish the remote monitoring of staff, equipment and well efficiency from bases located onshore.

Yet basic challenges persist in terms of the specifications and implementation of successful satellite communications systems for the energy sector – as secretary-general of the European Satellite Operators Association (ESOA) Aarti Holla-Maini is well aware. While ESOA does not engage directly with the oil and gas industries, her role in raising awareness of the value of satellite communications for data connectivity, back-up and resilience has made her privy to the communications demands of offshore operators.

"Above all, the oil and gas industry requires reliable systems that provide a constant service for voice, video and data applications," she says. "That means incorporating a degree of scalability to support the acquisition of new data and applications every year, as well as surge capacity to ease the impact of spikes in usage.

"Any satellite communications capacity also has to be able to be moved from one drilling location to the next," adds Holla-Maini. This is especially true for offshore exploration platforms that cannot afford to be rooted in one location for any longer than necessary. Full incorporation of these features allows ample reward for oil and gas companies, in the sheer range in which their rigs and platforms can sustain a strong communications link with the outside world.

Above all, the oil and gas industry requires reliable systems that provide a constant service for voice, video and data applications.

"The smartest operators are out in front of policymakers who want to reduce the risk of workplace injury or environmental mishaps," Holla-Maini says. "Norway, for example, is recommending that all companies planning new offshore oil and gas developments first consider robust network infrastructure that can be monitored on land. This entails the creation of advanced command centres that allow aspects of rig operations to proceed with minimal direct human intervention."

The increasing reliance of the oil and gas sector upon supervisory control and data acquisition (SCADA) centres onshore to coordinate operations of rig networks is rapidly becoming the new normal for companies in the North Sea, the Niger Delta and the Gulf of Mexico. The establishment of such a network provides everything from telemedicine regimes for isolated platforms to the monitoring of the integrity of offshore field resources. And although a few major oil companies have explored the possibility of connecting static rig networks through fibre-optic cables, satellites remain a useful tool in keeping the lines of communication to the outside world open.

Additionally, new monitoring technology integrated into drilling equipment and other aspects of the rig allows companies to amass crucial information on the reliability of their wells in real time.

"All industries are in ‘data harvest’ mode," says Holla-Maini. "And in a sector in which field data was, not that long ago, kept on clipboards or on Excel spreadsheets, such shared information is a bonanza."

For the better part of two decades, the oil and gas sectors have reaped the benefits of satellite telecommunication technology. Yet it is only now, as the price of crude oil settles quietly below the $50-a-barrel mark, that the largest energy companies have fully woken up to the cost benefit of an increased reliance on space-based communications networks. With the costs of recruitment, asset maintenance and exploration continuing to rise and major extraction projects being shelved the world over, the proven ability of satellite telecommunications to enhance the autonomy of drilling platforms has become an ever more beguiling proposition for the oil and gas sector.

"It’s really forcing both industries to rethink what they can do with smart technology to drive the traditional costs as far down as they can go," says Holla-Maini. "Satellite communications providers are offering drillers, operators and oilfield services companies more efficient capacity solutions. Combined with more flexible communications plans, they are now in a better position to deploy advanced technologies to increase service availability."

This is evidenced by the fact that profits among satellite telecommunications companies remain buoyed by their business with clients in the energy sector, despite the general collapse in the price of crude. Analysis from consultancy firm Frost & Sullivan found that the total market spend last year for satellite communications services topped $357.2 million, and it is predicted to reach $459.9 million by 2020. While this is something of a retreat from earlier predictions – that revenues accrued from applications in the oil and gas sector were to reach the billion-dollar mark by that year – it nonetheless shows that the industry is deadly serious in moving towards more autonomous, digitised operations facilitated by satellite technology.

This growth is being enabled not only by increasingly efficient transponders and greater bandwidth capacity, but also by the evolution in the capabilities of the satellites themselves. Units range from those that can guarantee internet access on isolated rigs, to analysing the fullness of oil tanks in storage facilities and studying the subtleties of a potential extraction site to better know when and where to drill.

Launch costs have also plummeted. While a few decades ago the price of putting a satellite into geostationary orbit was guaranteed to be in the millions, now it can just be in the thousands.

However, complexity and in some cases outright confusion has accompanied the increasing diversity of satellite capabilities. "Today, we see some satellite communications providers stitching regional networks together using multiple technologies," Holla-Maini says. "These networks suffer in terms of ubiquitous coverage, as well as in mobility across regions, consistent global service offerings, flexibility and scalability." It can spell a patchwork quilt of networks that is hard to navigate and difficult to manage.

In a sector in which field data was, not that long ago, kept on clipboards or Excel spreadsheets, such shared information is a bonanza.

In the meantime, the oil and gas industry’s vulnerability to cyberattack has increased. In 2012, hackers infiltrated the systems of Saudi Aramco, wiping or degrading files on 35,000 of the company’s computers to significantly disrupt basic supply lines and internal communications. In August 2013, two black-hat hackers from energy cybersecurity firm Cimation demonstrated that it was possible to manipulate outdated network software in place at a SCADA centre to convince the monitoring system that an overflowing oil pump was in fact empty. The following year, cyber criminals attempted to steal intellectual property from computers belonging to some 300 oil firms in Norway.

Without adequate cybersecurity procedures, the advantages of full interconnectivity between assets over and above decentralised networks, or even air-gapping crucial systems, is lost. It is a dilemma that satellite telecommunications have a potential role in solving. "In fact, these technologies, as well as private IP networking, deter access to networks by cybercriminals. Routine end-to-end encryption secures proprietary application, acting as a further deterrent. The Global VSAT Forum Cybersecurity Task Force has provided specifications developed by security experts and representatives from across the industry for service providers."

It is difficult not to imagine some degree of uniformity in the installation of internal data networks and supporting satellite telecommunication technology being reached over time. Moreover, as oil and gas exploration continues to move to more inaccessible areas of the globe, reliance on satellite telecommunications is almost guaranteed to increase. And in that sense, this sector will continue to be the vanguard of the oil and gas industry’s communications systems.