In shallows and deep

Consultant IT Power is continuing to make its mark as a technology incubator for ocean energy systems, such as with Pulse Tidal and OWEL 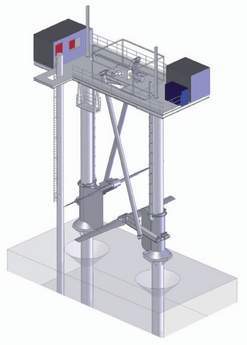 Renewable energy consultant IT Power has long played a leading role in the commercialisation of ocean energy systems through innovation and technology incubation. Taking promising concepts to pre-commercial status, its preferred means of developing a technology is to put together a development consortium comprising academic and industrial organisation embodying all the skills and experience necessary to carry out the development.

The Seaflow marine current turbine was the starting point for consultant’s involvement in ocean energy technology. The project was an evolutionary development of earlier IT Power projects, including a floating zero-head hydropower unit designed for water pumping in Sudan and a tethered tidal turbine deployed in Loch Linnhe, in Scotland.

IT Power led the Seaflow scheme and took the role of overall project manager, forming a new company – Marine Current Turbines Ltd (MCT) – to act as the development vehicle and hold the intellectual property rights. The outcome of the project, a 300kW two-blade horizontal axis turbine, was the world’s first pilot project for the exploitation of marine currents on a commercial scale and was installed in south west England, off the north coast of Devon, in mid-2003. MCT is now a successfully established enterprise, independent of IT Power, and is taking the technology forward.

The pioneering experience, though, allowed IT Power to pursue new innovative and attractive technologies in ocean energy systems. Foremost among these are the ‘Pulse Tidal’ system by the company of the same name, and Offshore Wave Energy Ltd’s (OWEL) wave energy converter (WEC) project, which are a tidal stream energy converter and a floating converter, respectively.

Each venture is a development in which the originator of the technology approached IT Power for its experience in developing ocean energy systems. In both cases, the originator companies had one or two employees. IT Power assembled the venture team, led the application for funding and managed the resulting projects. This model successfully provides a means for the originator to access the funding and expertise necessary to take a promising technology towards commercialisation.

To date, the race to harness tidal energy has concentrated mainly on horizontal axis turbines for relatively deeper marine current environments, having broadly similar configurations to modern wind turbines. However, there are a number of innovative and technically different systems being taken forward at various stages of development, and Pulse Tidal is an example.

While the more established designs of general marine current turbines require a significant depth of water in which to operate, the Pulse Tidal system is based on two horizontal hydrofoils, in tandem formation, that oscillate in the tidal flow in a similar way to whale and dolphin tails or flukes.

The use of horizontally-oriented foils allows greater exploitation of shallow water, and having two foils out of phase ensures relatively constant output. The commercial design will include facilities for positioning the foils in the calmer water close to the seabed for protection during storm conditions. All designs will include facilities to raise the foils above the surface for maintenance, inspection and cleaning.

The shallow water capability of Pulse Tidal also opens up new opportunities, which are particularly suitable for early installations. Estuarine sites, in particular, present opportunities to deliver power directly to major consumers, and this opportunity will be exploited in the £2M (US$3.9M) demonstrator project – the Pulse Stream 100 – this year, it is planned, on The Humber, a tidal estuary on the north east of England. The project is supported by a £878,000 (US$1.72M) Technology Programme grant, along with two grants, totalling £108,000 (US$212,000), from the Npower Juice Fund.

The Pulse Stream 100 device will be sited approximately 1km off the industrial port of Immingham, in north east Lincolnshire. With foils 11m long and positioned in water only 5m deep, the device will will extract energy from a 55m2 cross-section of the flow and be rated at 100kW – enough electricity to power up to 70 homes. In comparison, an underwater windmill type device would be limited by water depth to a diameter of approximately 5m, giving it a swept area of less than 20m2.

The Humber project is being undertaken by a consortium comprising IT Power, the originator of the Pulse Hydro technology, the renewable energy grid specialist Econnect, and engineering consultants BMT Renewables and the University of Hull. Suppliers are contributing in their own specific fields, including steel fabricators Corus Northern Engineering Services, control specialists Control Techniques, installation specialists Humber Work Boats, composite engineers High Modulus (Europe), composite fabricators Independent Composites, along with equipment suppliers such as Siemens, Leroy Somer, Bosch Rexroth, Stromag and John King Chains. The assembled consortium collectively has a strong record of achievement, which is of direct relevance to the project and the ongoing advancement of the technology for its commercial future.

IT Power is also leading the technology development of OWEL’s WEC system, which is a large scale device that delivers compressed air to drive standard turbo-machinery and is specifically for deployment as major structures in offshore sites.

An offshore position takes full advantage of the most energetic wave conditions, as approximately 80% of wave the energy is typically lost to seabed friction by the time waves reach shore.

The general form of the WEC is an array of tapering horizontal ducts floating such that the freeboard is approximately equal to the amplitude of the ambient waves. The WEC has a length related to the longest design wave, a feature which, together with a small water-plane area, ensures that a platform formed from multiple ducts will remain steady in a seaway, says IT Power.

The ducts are open at one end, and the mooring system of the platform ensures that this end is presented to the incoming waves. The air in the trough behind an incoming wave is trapped as the following wave seals against the top of the duct. This air is then compressed by the tapering ducts and delivered to a reservoir. The remnant energy is dispersed through a baffle arrangement and returned to the ocean. The air collected in the reservoir is then used to drive a compressed air turbine and generate electricity.

A full-scale WEC is formed of a number of ducts assembled into a large, concrete platform, with a wave capture length of 180m. In the wave conditions of the west coast of the UK this should give a rated output of 12MW and an average output of 4MW, with the WEC weighing 20,000 tonnes. The design of the WEC allows for it to be easily modified and sized to suit any given wave climate, says IT Power.

OWEL has been through several stages of development with the WEC system, including proof of concept, and tank testing with 1:100 scale and 1:10 scale models. Presently, the design is being optimised and survivability analysis is being undertaken for the large scale unit. The previous stages – which had funding from the UK Government and The Carbon Trust, and involved contributions from QinetiQ, and the New and Renewable Energy Centre (NaREC) facility in Blyth, Northumberland, England, as well as IT Power and the OWEL team – provided the foundation and confidence to take the WEC device to the next level, the consultants says.

airflow, power output, and efficiency were among the parameters studied – the tank-testing programme, and an assessment of the commercial potential of the design. The mathematical modelling and the tank-testing components were conducted by QinetiQ.

The study concluded that, subject to the need for an improved knowledge of the flow processes involved, the prospects of a full-scale device were promising.

The next step was to test the 1:10 scale, 15m-long models of the WEC systems in a number of different configurations at the NaREC facility. The testing programme was supported by The Carbon Trust’s RD&D programme. A series of tests on the prototype models was carried out to obtain an increased physical understanding of the underlying principles of the operation of the prototype and also to gather information for modelling.

Mathematical modelling has been an integral part of the WEC system development, and computational fluid dynamics (CFD) software was provided by ANSYS CFX. Empirical data from the tank tests were used in validation. Extensive 2-D and 3-D CFD simulations of the two tank models tests have been carried out using a multiphase flow methodology combined with a transient solution of the flow. A close correlation was achieved between the experimental results obtained from scaled tank testing and the CFD results.

OWEL estimates that a further three years will be required for constructing and testing a sea-going platform, most likely at a test facility in Orkney. This will lead to the construction and deployment of the first phase of commercial platforms, perhaps at the proposed Wave Hub facility off the coast of south west England, or similar, says IT Power.

As a large floating device with a high power rating and able produce large amounts of energy in comparison to many other wave energy technologies, OWEL’s WEC system is an unusual structure in the nascent ocean energy sector, although it is not unique.

However, within the wider offshore sector, large-scale floating structures are common and therefore OWEL is confident that it can produce the devices at the scales required to achieve the necessary economies to help it pursue commercial success. Present cost of energy for an ‘early stage first farm’ development is estimated to be approximately £0.097/kWh (US$0.19/kWh), a very reasonable value, says IT Power.

Future ideas for OWEL may be to combine with offshore wind generation given the large, stable platform and anchor points with shared grid connection costs and easement of intermittency. Also, the concept of combining compressed air with gas turbines for power generation is well established and may merit further investigation after OWEL has firmly established itself.

Ocean renewable energy has been identified as a key future growth industry for the UK and an important factor in achieving the Kyoto Protocol emission reduction targets. Commentators agree that tidal power has a vital role to play in meeting the country’s future energy requirements and the Government has already funded several projects in the field.

Tidal power has the distinct advantage over other renewable sources, of being highly predictable. The regularity of the tides and their huge energy potential therefore helps to make tidal currents a highly attractive resource. Yet, development of ocean energy technology has proven to be a highly challenging field of endeavour in designing, building, operating, maintaining and finally decommissioning in the hostile environment. The prize, however, is substantial, in terms of carbon reduction, generation from a secure renewable energy supply and the development of thriving future industry.

The examples of the system from Pulse Tidal and OWEL show a business development model run by IT Power that has been providing a means for technology originators to access the funding and expertise necessary to take a promising technology towards commercialisation.