As hydro sector opportunities increase, Impsa is steadily pushing the envelope of its extensive electromechanical offerings technologically but also beyond traditional fulfilment to more turnkey supplies and developer possibilities 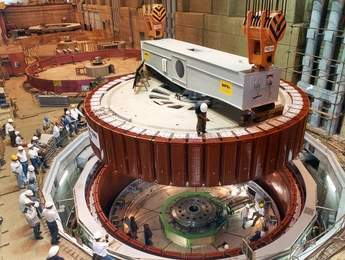 With 65 years of creating and supplying bespoke equipment to the hydropower industry, Impsa is building on that track record by both further developing its electromechanical designs, such as for the Kaplan turbines for the 2330MW Tocoma project in Venezuela, and to look at more ‘water-to-wire’ opportunities like engineering, procurement and construction (EPC) turnkey contracts and further developer options.

As a key part of a century old, privately-held Argentinian industrial group, the Pescarmona Group of Companies (PGC), Impsa says its short- and medium-term strategy is steady, unaffected by the non-close last year of the acquisition of most of ge-hydro by its parent. The company continues to move ahead with major and strategic contract awards, illustrated again with the recently awarded Tocoma scheme but also the refurbishment of Acaray II in Paraguay. It seeks greater involvement in Paraguay having only previously supplied the Yacyretá binational plant, built with Argentina and to which it supplied seven of 20 turbines and other components.

Recently, designers were able to reach a high performance level and excellent cavitation behaviour for the Tocoma turbines. It added that the research and development effort has enabled the turbine design to give the largest output for a Kaplan unit for the given head range, and believes the design is a milestone for the company’s activities in hydro.

Currently, Impsa notes, it has the prime hydraulic laboratory for turbine design in Latin America. The 2500m2 facility plus 400m2 workshop in Mendoza has two test rigs – high head universal and low head. Standard turbine model sizes are 400mm wide, the Kaplan runners always metallic and the Francis units either the same or made of epoxy reinforced carbon fibre. There is the same split in materials options for spiral cases and the draft tube, though the draft tube cone is always made in Plexiglas to help observe cavitation performance. Impsa notes that the recent acquisition of a five-axis milling machine has further improved its model manufacturing capabilities.

In addition to the hydraulic lab and production plant in Argentina, Impsa also has a manufacturing facility in Lumut, Malaysia, and is presently building a third site, in Recife, the capital of the north east Brazilian state of Pernambuco. The latter will also produce wind turbines. The range of turbines made is from less than 10m head to more than 1,200m, and generator size is 3MVA to 800MVA.

Impsa describes itself as being focused on medium and large projects through its own product lines. The contracts have an average value of approximately US$50M, which it says is well above the average in the industry. Currently, the manufacturer is providing turbines, generators and other important components for several other hydro plants in Latin America, such as: Macagua I in Venezuela; Porce III in Colombia; Simplicio , Anta and Dardanelos I in Brazil. In addition, a major project being served farther afield is the Bakun on Borneo island, Malaysia.

The company can also build upon international turnkey and developer experience as the hydro industry becomes increasingly active in Latin America and overseas. It has helped to develop more than 1,100MW as an investor in infrastructure projects involving more than US$900M of accumulated investments. The projects it has undertaken on EPC basis or helped to develop, include:

Manso: A contract to supply, on an EPC basis, the electromechanical equipment for the scheme in Brazil developed under concession by Proman, a JV of Furnas, Odebrecht and Servix.

Urugua-i: The largest hydropower plant in the Misiones province of Argentina, build near the city of Iguazú, was created as a Build, Operate and Maintain (BOM) scheme and has a design output of 366GWh annually.

Potrerillos: In December 1997, the Province of Mendoza, Argentina, awarded a 25–year concession to build, operate and transfer the Potrerillos project to CEMPPSA, a special purpose company formed by Impsa and others, including the Province of Mendoza. The Project began in 1999 and involved the construction of a 116m high CFRD structure across the Mendoza river, and a new hydroelectric plant in Cacheuta, plus upgrade of an existing plant from 60MW to new complex with an installed capacity of 193MW. The power plant was commissioned in 2002.

CBK, in the Philippines: CBK Power Corporation is a special purpose company set up by Impsa to develop, finance, rehabilitate, construct and operate the Caliraya, Botocan and Kalayaan I and II plants in the Philippines through a contract with the National Power Corp (NPC). At present, the project is generating some 790MW, twice the initial capacity, and 8.5% higher than the value guaranteed by contract (728MW). For the venture, in 2001 a project finance deal of US$560M (capital and interest) was closed with 19 international banks and was guaranteed by what then was the largest private political risk insurance done anywhere.

When the proposed purchase of GE Hydro was announced, PGC commented on the firms’ complementary operational and technological footprints. Should the deal have closed before the late May 2007 deadline, PGC considered that their distinct presence within the group would have been viewed as an integrated offering, and saw leverage in accessing finance and also fresh growth opportunities in EPC contracts and project development, such as through build, own and transfer (BOT) schemes.

The two companies were to have been run independently from a commercial point of view. Principally, there were to have profited from synergistic benefits in a few administrative areas, such as research and development, IT, purchasing, etc. There was also the possibility of joining manufacturing capacities in select business opportunities, says Impsa.

While it is active worldwide, mainly in the southern hemisphere and especially so in the ‘very active’ Latin American market, the acquisition could have seen some level of geographical partition. PGC was looking to expand its presence in the northern hemisphere (North America, China, Scandinavia and the rest of Europe) through GE Hydro.

Impsa is itself little affected by PGC not buying most of GE Hydro, it tells IWP&DC – and nor would it have been for the most part. Consequently, it is steady and confident in its strategic course going forward to push ahead with technological, turnkey and developmental offerings to the booming hydro sector in Latin America and beyond.