Impact of the Sichuan earthquake

China’s hydro rich Sichuan Province was recently shaken by the country’s strongest earthquake for over 30 years. Zeping Xu, from the China Institute of Water Resources and Hydropower Research, reports on the impact of the disaster on the province’s dams and reservoirs 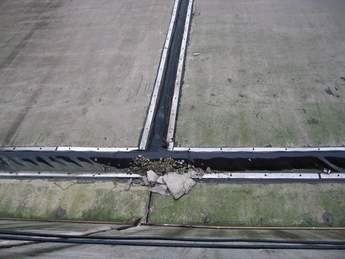 The strongest earthquake to hit China in more than three decades jolted Wenchuan County in Sichuan Province at 2:28pm on 12 May 2008, resulting in the death of over 60,000 people.

Wenchuan is about 100km northwest of Chengdu, the provincial capital of Sichuan. It has a population of more than 100,000. The neighbouring provinces of Gansu, Chongqin, Shanxi and Yunnan also felt the shock of the earthquake.

• The Indian plate dives to the Asian plate, causing fast uplift of the Qinghai-Tibet Plateau. The plateau material slowly moves to the east, crushed eastward along the Longmen mountain structure zone on the eastern edge of the plateau. The movement is blocked by the rigid table under the Sichuan Basin, causing the long-term accumulation of structural stress energy. The accumulated energy is suddenly released in the area of the Beichuan–Yinxiu of Longmen mountain structure zone.

• The earthquake was a fault earthquake characterised with thrust, clockwise, squeeze movement. It was a one direction breakdown earthquake and the procedure of stress transfer and energy release is relatively slow. This may cause rather strong and long term aftershocks.

• The earthquake was shallow, at a depth of 10-20km, but caused enormous destruction.

The southwestern area of China is rich in water and hydro power resources. It is the most important hydro power energy base of China. Many hydro projects are constructed or under construction in this area. There are four large dams near the epicentre of the earthquake.

• Shapai dam – an RCC gravity arch dam with a maximum height of 132m. The designed earthquake intensity is VII, with a peak ground acceleration of 0.138g. Shapai RCC dam is located 12km away from the epicentre.

• Baozhusi dam – this dam is located in Guangyuan, Sichuan province, downstream of Bailongjiang river, 270km from Chengdu. The dam is a concrete gravity dam with a height of 132m. Its reservoir storage capacity is 21×108m3 and the installed capacity of the powerhouse is 700MW. The basic earthquake intensity at the site is VI degree.

The earthquake on 12 May was very strong, lasted a long time and affected a vast area. All the dams in the affected area were designed based on the earthquake intensity map published in 1995. Consequently, for most of the structures in the affected area, the peak ground acceleration (PGA) was greater than their designed intensity. The intensity map will now be modified by the State Seismological Bureau (SSB) of China and will be published at a later date. After these modifications, a seismic re-assessment of all dams in the area will be carried out.

To date, no dams have been breached in the quake-hit region and no secondary disasters have occurred due to the safety of dams. The structural integrity of the dams can be attributed to good design, good quality construction, and the effective management of and timely response to the emergency.

However, the intensity of the earthquake has caused significant damage to the dam structures. Considering the large number of dams in the affected area, rehabilitation will be an arduous task well into the future. There are various dam types in question and they will provide a good opportunity for studying the failure mechanism and failure mode of different dams. Further research work on earthquake engineering of dam projects is necessary. International co-operation will also play an important role in this field. The Chinese Committee on Large Dams (CHINCOLD) welcomes expert groups from icold to visit the dam sites in the future.

The southwestern provinces have a large number of reservoirs, many of which sustained significant damage during the quake. The damaged water infrastructure posed serious threats to flood control and security in earthquake-stricken regions, particularly in the hardest-hit province of Sichuan. According to incomplete statistics, 1583 dams and reservoirs in Sichuan province have been damaged to a differing extent. Among these reservoirs there are:

• Three large reservoirs (with a storage capacity larger than 108m3).

Damage to the dams during the earthquake includes crest settlement, slope instability, cracks, leakage, failure of water discharge and power generation facilities etc. Three Gorges Dam, which is a fair distance from the epicentre, has not suffered any impact. One of the key water projects in Sichuan, the 2000-year-old Dujiangyan irrigation system, is safe even though it is located near the epicentre.

• A horizontal displacement to the downstream side of 179.9mm.

• Displacement along the dam axis (from both abutments to the river centre) at 10.16mm.

Figures 3-8 shows the extent of the damage sustained at Zipingpu.

The Shapai RCC arch dam, which is 12km from the epicentre, was not accessible at the time of writing. Inspection from a helicopter shows that the dam is relatively safe. The Bikou clay core rockfill dam is reported to have 30cm displacement. To date there are no further reports on the safety status of the dam.

Massive landslides following the earthquake dammed rivers and lakes in several counties of the quake-hit area, posing threats to downstream areas. It is one of the major dangers associated with secondary disasters of earthquakes. Thirty-three landslide blockages were reported and river waters overflowed three of the blockages in Qingchuan County but did not pose any danger.

The most dangerous build up of water, about 3.2km upstream from Beichuan County, measured 9km long, 200-250m wide and 40m at the deepest sections. With an estimated volume of 200-300Mm3, it was a major threat to the Beichuan County and its downstream areas.

In order to avoid secondary disasters caused by breaching of the landslide blockages, the government undertook engineering measures to drain the lake. These included blasting the blockages. Attempts were successful and, on 12 June, the outflow exceeded inflow and the lake volume started to reduce. However this is only a temporary success and long term solutions are being sought for this and the other barrier lakes. Another seven landslide blockages were found in Beichuan County, about 160km from the epicentre at Wenchuan.

After the earthquake, China’s National Development and Reform Commission (NDRC) immediately allocated 53M yuan (US$7.6M) in emergency funds to assess and respond to the damage caused to reservoirs by the earthquake. The money will also be used to rebuild hydrological and weather monitoring facilities in southwest China. The goal is to guarantee the safety of medium-sized and large reservoirs and prevent secondary disasters in the epicentre area. Vice Premier Hui Liangyu also urged local officials to check the condition of these sites and guard against secondary disasters.

There are nine teams with more than 150 experts (including dam experts from Institute of Water Resources and Hydropower Research and CHINCOLD) working within the area. They were dispatched by the Ministry of Water Resources to the region immediately afterwards to check the safety of dams and reservoirs and to provide professional guidance. So far, all the damaged dams and reservoirs have been carefully checked.

No dams were breached during or after the strong earthquake. This is a great achievement in dam safety management but of course it is not an easy job. According to statistics, there were 69 dams at a high risk of breach after the earthquake. Water levels for the reservoirs at a high risk of breaching were reduced or even emptied. In Sichuan Province, 69 reservoirs were emptied and 826 reservoirs were operated under controlled water levels. All damaged dams were supervised by specified persons around the clock and 630 dams were temporarily strengthened.

At present, the safety of most of the dams is under control and the large scale rehabilitation of the damaged structures will soon start. The most important work continues to be the identification of the damage and assessing its impact on dam safety. Design teams have already started investigation works.

Dam experts are also analysing data from the seismic monitoring network. Further results will be published in the near future. In the vast dam and reservoir area, there are a lot of seismic stations used for the daily monitoring of ground motion. For the important dams, strong motion accelerographs are installed at the dam foundation, mid-height and at the dam crest.

These instruments are important for understanding the dynamic response of the dam in different positions and also to provide valuable data for verifying numerical analysis which is a good tool for predicting the behaviour of the dam.

Drawing upon experience to date in the earthquake stricken area, some important points must be taken into consideration:

• All dams should be well designed and the construction quality should be strictly controlled. This is the basic requirement for surviving such a devastating disaster.

• All the dams must be well managed by specified organisations at different levels. These organisations should have a prompt response to the command from the top administration. In this earthquake event, quick action from the government (both from the Ministry of Water Resources and local administrations) played an important role in dealing with the emergency situation of dam safety.

• Both RCC and CFRDs perform well during an earthquake if designed well. Many other factors should also be taken into consideration. For dams constructed in strong earthquake areas, special measures should be considered in the design to improve its performance during the event. For CFRDs, the compaction criteria of rockfill material, slope near dam crest, face slab reinforcement, vertical joints and waterstop structures are the main issues that should be considered.