‘Moving an electric switch could make the Titanic practically unsinkable’ 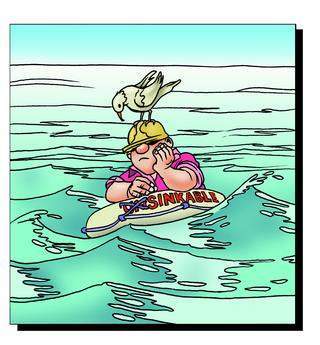 I don’t like to admit it but hubris – an insolent overconfidence or arrogance – is not unknown among engineers, even of the power system kind. Historic instances will occur to you without reminders from me. And you will probably share my feeling that future instances lie in wait.

During a visit to the Science Museum in London, UK, I dipped into one of those transient exhibitions that that institution hosts occasionally. This particular show was devoted to artefacts raised from the wreck of the White Star liner, Titanic, a coal-fired four-funnel steamship that famously sank on her maiden voyage in 1912.

She was at the time described as the largest ship – and indeed the largest ‘moving object’ – that had ever been built. Her 26000 t hull of inch-thick (2.54 cm) steel plates had a double bottom and sixteen watertight compartments. A contemporary issue of a trade journal, The Shipbuilder, called the watertight subdivisions ‘very complete . . . and so arranged that any two main compartments may be flooded without in any way involving the safety of the ship’.

The Titanic was internationally acclaimed. She was state-of-the-art in every sense of that twentieth-century cant phrase, so was of course lit electrically (in the main) and equipped with radio. She boasted such modernities as a loudspeaking telephone on the bridge and telegraphs to relay speed commands to the engine room. Were an accident or other event to prompt him, the captain could (again I quote The Shipbuilder), ‘simply by moving an electric switch, instantly close the doors throughout and make the vessel practically unsinkable’.

But an iceberg loomed up on that maiden voyage across the Atlantic and, though the steering wheel was spun fast enough to avoid a head-on collision, and telegraphy from the bridge to the engine room simultaneously demanded reverse thrust, an underwater spur on the iceberg took a mere minute to rip the hull open. Of more than 2200 passengers and crew, barely more than 700 survived.

The New York Times for 16 April 1912, reporting the loss, headlined the insistence of a White Star Line manager that the great ship was unsinkable, even after she had gone down.

Electricité de France has for many years been among the leading sponsors of efforts to save Titanic artefacts. But it was no thought of that that moved me to ask exhibition officials at the Science Museum about the liner’s generating plant. Had this been state-of-the-art too? Alas, no-one in attendance seemed to know.

I should like to believe that the Titanic’s electrical power engineers were of the soberly, even modestly, professional kind that leaves hype to the promotional classes.

This claim is unsustainable

I have never known a lot about natural gas but for a moment I thought I had learnt something big and new about it. This happened when a colleague breezed into the office and told me of a well set-up gentleman’s contribution to a high-powered conference on sustainable energy. What I heard drove me to check my slender existing knowledge in, of all things, a couple of general dictionaries, one American and the other British.

Natural gas, said my Concise Oxford Dictionary (from England), is “an inflammable mainly methane gas found in the earth’s crust, not manufactured”. Webster’s New Universal Unabridged Dictionary spelt it out (from the USA), of course unabridgedly and not concisely, as ‘a combustible mixture of gaseous hydrocarbons that are accumulated in porous sedimentary rocks, esp. those yielding petroleum, consisting usually of over 80 per cent methane together with minor amounts of ethane, propane, butane, nitrogen and sometimes helium: used as a fuel and to make carbon black, acetylene and synthesis gas’. No transatlantic disagreement there!

The well set-up gentleman had spoken from the floor about what he called ‘renewable natural gas’. This, he contended, had been neglected by too many UK governments. But only after repeated references to this wonderful fuel did he let drop that it was something derived from such ‘organic’ wastes as food residues from restaurants.

I suppose biogas is ‘natural’ in a sense that town gas, say, is not, and it has its place with other biomass derivatives in the renewable pantheon. However, that is rather playing with words. Natural gas, as (almost) universally understood, is a fossil fuel resource and exhaustible. The well set-up gentleman brought joy to the conference, but it was unsustainable.