The Wind Farm Main Controller is a system, successfully employed in Denmark, which enables large numbers of individual turbines in an offshore wind farm to be controlled in the manner of a single power station. 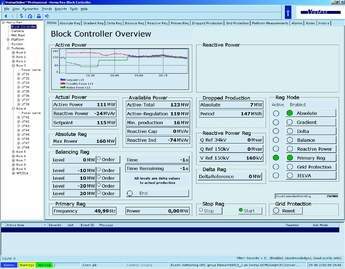 The Danish grid code requires that wind farms consisting of large numbers of individual wind turbines can be operated as single power plants and that they are able to participate in both frequency and balance/power control modes. The two large offshore wind farms currently operating in Denmark, Horns Rev (80 x 2 MWe), see Figure 1, and Nysted (72 x 2.3 MWe), have this capability and can participate in area control just like a conventional power plant, offering a number of control functions that can help the operators maintain the power balance as agreed by participants in the Nordic electric power market.

To achieve this goal a system called the Wind Farm Main Controller (WFMC) was developed by Elsam Engineering (now Dong Energy) for controlling Horns Rev, while a similar controller was developed by Energi E2 (now also part of Dong Energy) for Nysted. The controllers include a number of control possibilities, such as: absolute production limiter; balance control; power rate limitation; and delta control.

In the case of Horns Rev, which is in the western part of Denmark (Figure 2), the controller is activated about once a day. But at Nysted, which serves the eastern side of the country, there has been no need to use the controller, so operational experience with the advanced control modes is limited to test runs.

At the Horns Rev offshore wind farm, situated in the North Sea, 14-20 km from the shore, off the western-most point of Denmark, the turbines are of Vestas manufacture, with OptiSpeed technology. They are arranged in ten lines with eight turbines per line. Each line is connected to a 33/150kV transformer located in an offshore substation, which is connected by submarine cable to an existing onshore substation. All power cables have integrated optical fibres for the remote control system.

Control of both active and reactive power is handled by the WFMC, which effectively makes the farm act as a single production unit instead of 80 individual generators (see Figure 3).

The controller receives set points for active and reactive power from the central control centre and then distributes corresponding set points to the individual turbines (Figure 4).

During periods with reduced transmission capacity in the grid (eg due to service or replacement of components in the main grid) the wind farm is able to operate at reduced power levels with all turbines running. This is called the absolute production limiter.

Another feature is that the wind farm is able to participate in regional secondary control. This is called balance control.

Passing weather fronts and thunderstorms can cause large and fast variations in the power production. Obviously, decreasing wind speeds cannot be avoided, but when the wind speed increases, the wind farm is able to impose a positive rate of change (dP/dt) limitation. This is called power rate limitation.

In some periods it may be advantageous to run the wind farm as spinning reserve. To make this work properly the wind farm is controlled so the power production is an adjustable number of megawatts below the possible power. This is called delta control.

These various power control functions are shown in Figure 5.

The frequency control (primary control) affects the whole UCTE grid and is carried out on a proportional basis by the UCTE participants. With WFMC, the wind farm is also able to participate in this frequency control. All settings are adjustable, ie, dead band, control band gain, and max/min (see Figure 6).

The Horns Rev SCADA system is VestasOnline Professional (see Figure 3) and parameters in the WFMC are set directly from this system. The WFMC communicates with each turbine and also a measuring front end (Figure 7).

All communication to and from the WFMC is handled through an OPC interface via an Ethernet TCP/IP based network.

Based on data from the individual turbines and measured, summed data from the transformer station, the WFMC distributes control signals back to the turbines. Within the wind speed range measured at any time, the wind farm is controlled as a single unit by means of the control functions mentioned above. An essential parameter in the control structure is to know the power capability both for the individual turbines and for the wind farm as a whole.

Each turbine determines its own active and reactive power capability from an estimated “free wind speed” in front of the turbine. The estimation of the free wind speed is based on knowledge of the actual pitch angle, power and rotor speed.

With the Horns Rev WFMC, it is now possible to investigate the dynamic performance of large scale wind farms under various weather conditions. This has produced new knowledge that can be used in the design and in the estimation of production from future large scale offshore wind farms.

In several situations, large power fluctuations have been observed – usually appearing on days when large rain showers or thunderstorms pass the wind farm. Figure 8 shows a plot from 13 March 2005. The upper blue curve is the production at Horns Rev, while the lower red curve is the production from a number of onshore wind turbines located all over Jutland and Funen.

The conclusion is that placing a lot of wind turbines in a fairly small area may, in some cases, result in large power fluctuations due to local weather situations. To some extent, these fluctuations can be handled with the WFMC by using the Power Rate Limiter. On 20 January 2005, the wind speed increased to a level just above 25 m/s almost instantly across the whole wind farm (Figure 9).

In this sequence the whole wind farm went from full power to no production within three minutes. Then there was almost no production for about 10 minutes and after 7-8 minutes full production returned. During that night, similar events occurred several times.

On a “normal” day of operation, as shown in Figure 10, several of the control functions in the WFMC are sometimes active simultaneously. In this plot, at about 01:10, the frequency control is activated with a spinning reserve that can be used in case of underfrequency. At about 01:40, a manual balance order is issued. After a few minutes a new order is sent, and shortly after that the balance control is cancelled again. The frequency control still keeps some megawatts in reserve for the next few hours. The dip in power at about 02:10 is actually caused by the frequency control reducing the power because a fast frequency rise occurred at that time.

At about 03:30, a new set of balance orders is issued. Note the situation at about 03:45-04:00 when balance orders increase the power close to the possible power. Even though the balance control requests increased production, the frequency control does not allow it. The frequency control has a higher priority than the balance control in the WFMC. This means that when the WFMC needs extra megawatts for spinning reserve it will obtain this because it overrides all other functions.

From about 04:00 and for the next two hours the power is reduced significantly because of overproduction in the grid. Then the balance control and frequency control are cancelled, and the wind farm returns to normal operation.

Future wind farms in Denmark (and other countries) will also have controllers of the WFMC type and will participate in maintaining the power balance in the grid. In the case of Horns Rev stage 2 (215 MWe), scheduled to enter operation in 2009, and Nysted (also 215 MWe), with a projected operation date of 2010, similar control systems will be used.

Figure 1. The Horns Rev wind farm Figure 2. Map of power plants in Denmark, showing location of Horns Rev and Nysted. Source: Energistyrelsen Figure 3. Typical Wind Farm Main Controller screen display (from the VestasOnline Professional SCADA system at Horns Rev ) Figure 4. Integration of the WFMC with the rest of the system Figure 5. Outline of the active power control functions of the Wind Farm Main Controller. The plots show the possible power and actual achieved power with the different control functions active Figure 6. Characteristics of frequency control Figure 7. Communications principle of the Wind Farm Main Controller – the communication interface is OPC Figure 8. Power fluctuations during a day with many rain showers.
The wind “fuel” is not steady Figure 9. Shutdown of the turbines due to the wind speed exceeding 25 m/s. The wind “fuel” can run out. The plot shows production from individual turbines as well as the total power from the whole wind farm Figure 10. Several functions of the WFMC can operate at the same time, as shown in this
plot for a “normal” day of operation. The power can be controlled but can be lost