The nuclear industry is always looking at ways of improving safety and performance but nothing is more important than protecting employees, the public and the environment. A new technology, currently under development, may help improve safety and ultimately protect the world from nuclear disaster as Nicholas Dzuba, P. Eng explains. 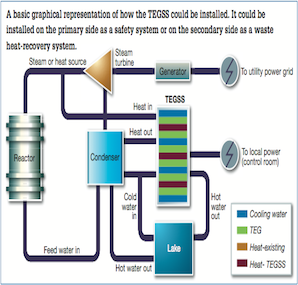 If Fukushima had an additional independent electrical supply when it was hit by a tsunami, control room operators at the facility might have prevented the release of radiation on an unsuspecting public.

The Thermoelectric Generator Safety System (TEGSS) is a heat-energy recovery system that generates electricity. Heat energy comes from the reactor and is independently channelled back into the system to generate electricity; enough so that a plant may be monitored and controlled to prevent an accident. What’s more, it has a small footprint – just 3,000 square feet.

Normally, AC power for accident recovery is supplied by offsite sources via the electrical grid. Loss of this offsite power (LOOP) can have a major negative impact on a power plant’s ability to achieve and maintain safe shutdown conditions, so plants have backup generators and additional batteries onsite.

LOOP events are common in extreme weather. TEGSS can provide power in the event of a total loss of onsite/offsite power.

The TEGSS could be installed on the primary side as a safety system or on the secondary side as a waste heat-recovery system. The DC power produced can be used for equipment in the control room and the TEGSS can be connected to the existing DC system.

The system has no mechanical moving parts other than pumps and valves, which makes its maintenance very easy. Thermoelectric generators have been used reliably for more than 30 years in deep space probes.

Unlike standby generators the system produces no greenhouse emissions, which of course, is unlike conventional standby generators. But its main benefit is that it provides an independent power source to the nuclear facility as long as there is heat within the reactor. Unlike battery backup systems this does not need to be recharged during a power outage, and in fact could be used to recharge batteries.

Work is now being carried out on the TEGSS project at XJTU University in China and UOIT University in Canada. Dr Peiwei Sun, a research scientist in the Department of Nuclear Science and Technology at (XJTU), is collaborating with TEGSS for research and development of the new system, with the objective to overcome critical accident scenarios with effective safety systems. The team believes the design has “ambitious application prospects”, particularly in China as there is a significant number of nuclear projects currently underway.

Dr Hossam Gaber, director of the Energy Safety & Control Lab at the University of Ontario Institute of Technology (UOIT) has been the lead principle investigator of the project since 2015.

The team at UOIT also conducted experimental tests to evaluate and validate the performance of TEG units in different configurations and operating conditions. For example, a complete risk-based FMEA model was developed and evaluated to ensure minimum operational risks and the highest safety level during an emergency. The team developed an intelligent, decision-support system to identify an optimum configuration of the TEG network – in series and parallel – to achieve maximum power output, and to ensure plant safety. In addition, the UOIT team investigated the area of design innovation to maximize the performance of the TEG network and the subsequent integration with a nuclear power plant.

The next phase of the project will be to complete the study for specific installations with nuclear power plant technologies.

Nicholas Dzuba, P. Eng., is president of TEGSS Nuclear Cooling Solutions Inc. and a graduate of the University of Windsor with a degree in Electrical Engineering. He has eight years’ experience in design integration and project management related to nuclear power plants.