Reciprocating engine specialist Wärtsilä sees its prospects in the power market in 2017 as “solid”, thanks “to growth in electricity demand in the emerging markets and the global shift towards renewable energy sources, which will support the need for distributed, flexible, gas fired power generation.” 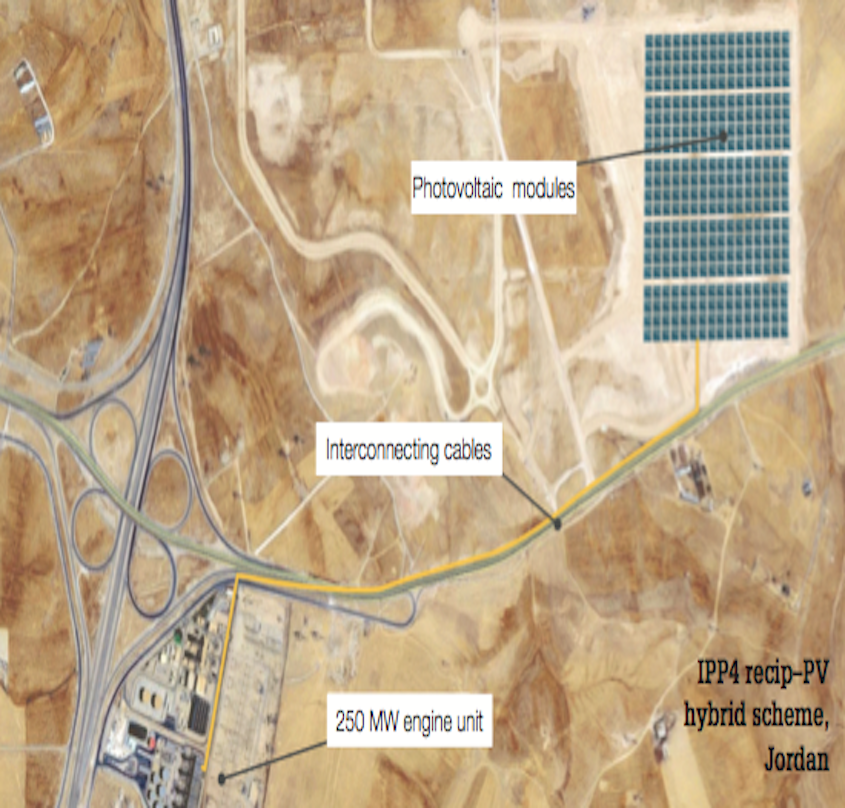 Reciprocating engine specialist Wärtsilä sees its prospects in the power market in 2017 as “solid”, thanks “to growth in electricity demand in the emerging markets and the global shift towards renewable energy sources, which will support the need for distributed, flexible, gas fired power generation.”

Like other major players in the power industry, Wärtsilä is in the midst of what it describes as a “major digital transformation” and has appointed a chief digital officer to the board of management.

One such hybrid project is a plan to add PV to the 250 MWe IPP4 plant in Jordan, which consists of sixteen Wärtsilä 50DF engines delivered in 2014. Under an MoU signed in April 2016, Wärtsilä will act as EPC contractor for the solar addition, providing some 52 MW of PV modules (covering an area of 81 hectares), as well as inverters, switchgear, control systems and step up transformers.

Recent orders for recip based plants

Among Wärtsilä’s recently announced orders is that for supply of a 150 MW plant to be built in Kodda, Gazipur district, Bangla Desh, consisting of eight Wärtsilä 50 and one Wärtsilä 32 engine to Ace Alliance Power, a special purpose company owned by the Summit Group.

The contract is described as “engineering and equipment”, with additional advisory services to be provided for plant installation, testing and commissioning, as well as on-site staff training. The equipment is scheduled to be delivered during the second half of 2017, and the plant is scheduled to be operational in early 2018.

The Summit Group of Companies is the largest independent power producer in Bangladesh and after completion of this new plant will have 900 MW of Wärtsilä supplied installed capacity, while Wärtsilä engines in Bangla Desh (totalling about 3 GW) will account for roughly 25% of the country’s installed capacity.

Wärtsilä is also supplying a 100 MWe/96 MWt (district heating) CHP plant to Kraftwerke Mainz-Wiesbaden AG in Germany, consisting of ten 34SG engines running on natural gas. Scheduled to be fully operational by the end of 2018, it is Wärtsilä’s biggest plant to date in Germany, with a scope that includes EPC, as well as a 15-year service agreement with performance guarantees.

The gas engines can be started and stopped within just 2 minutes. “This allows us to operate in the balancing markets”, says Lars Eigenmann, CEO of Kraftwerke Mainz-Wiesbaden, and “with flexible capacity like this, we have the chance to operate successfully at those times of the day in Germany when there is no solar or wind power available. We can start and stop severaltimesaday,andsellthepowertothe European wholesale markets.”

The gas engine plants, each employing five Wärtsilä 34SG machines and scheduled to be operational in 2018, will be located at Brigg and Peterborough. They will provide balancing power for the grid, with the capability of ramping up to full load in two minutes. The UK has added substantial amounts of intermittent renewable power generation and flexible power plants are needed for grid stability. Also, the capacity mechanism in the UK allows Centrica to operate fast response gas-fired plant competitively in the balancing market.

The new plants, for which Wärtsilä is acting as EPC contractor, will be the biggest medium-speed engine-based gas power plants in the UK. The installed base of Wärtsilä plants in the UK is relatively small, a little over 250 MW (including the two new facilities).

In Indonesia, a consortium of Wärtsilä and construction company, PT PP (Persero) Tbk, has signed a contract to supply two 57 MW modular power plants to PT PLN, the Indonesian state utility. The consortium will be responsible for the complete EPC, and will also operate and maintain the power plants for a 5-year period.

The two plants, to be located in the cities of Jayapura and Kendari, will employ 12 Wärtsilä 34DF engines (six per power plant), capable of operating on multiple fuels, including liquid fuels and natural gas. The equipment will be delivered during the first quarter of 2017 and the plants are scheduled to be operational during the first half of 2017 – certainly qualifying it as a fast track project.

The power plants will run on light fuel oil for the first year but, thanks to the multi-fuel capability of the engines and the availability of a gas supply, the plants will then switch to natural gas fuel.

The plants will be based on Wärtsilä’s Gas Cube technology. Gas Cube is a ready- to-use pre-engineered modular power plant package designed to achieve fast delivery with minimal site work. In addition to the short installation time needed, they can also be easily dismantled and re-installed individually somewhere else if necessary. The power plants are part of a public tender from PT PLN and the plants will provide flexible baseload power to the Indonesian grid.

Wärtsilä and PT PLN have a long standing business relationship and recently signed a memorandum of understanding to build additional power generation in Indonesia, where Wärtsilä’s installed base is expected to exceed 3.2 GW by the end of 2017.

In Tanzania, Wärtsilä is supplying a 40 MW power plant to Geita Gold Mining Ltd. The turnkey engineering, procurement and construction order includes four Wärtsilä 32TS engines running on heavy or light fuel oil. The plant is expected to be operational during the first quarter of 2018.

The power plant will provide a reliable electricity supply to the Geita gold mine, located in the Lake Victoria goldfields of the Mwanza region in north-western Tanzania. Being off-grid means that the mine needs to secure its own power supply. Since the mine needs to remain operational at all times, reliability and high efficiency were key considerations in the award of the contract.

Wärtsilä has a strong footprint in Africa with an installed base of more than 6500 MW and extensive experience with carrying out EPC projects in a variety of locations.

Meanwhile, in Russia, Wärtsilä is to supply a 55 MW CHP plant as part of the modernisation of the Solikamsk thermal power station, located on a pulp and paper mill site in the Perm region.

Wärtsilä’s scope includes 50SG engines running on natural gas and “extended engineering and equipment delivery”. Equipment deliveries are scheduled for 2017 and the plant is expected to be operational by the end of 2018, after modernisation of the power station has been completed.

The new CHP plant, will provide heat and power to the paper production facility as well as district heating to the city of Solikamsk.

Globally, Wärtsilä’s installed base is more than 60 GW in 176 countries.