Greens is good for you 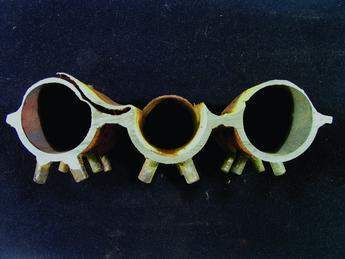 Visual inspections of boilers during scheduled maintenance by specialists TEi Greens at a waste incineration power plant found two key areas of boiler tubing that were being subjected to severe corrosion and erosion. In these areas the carbon steel tubing was losing considerable wall thickness during a twelve month period – necessitating removal and replacement, or at least some in-situ repair, at each annual shutdown. In the worst areas, a.manually applied welding deposit of lnconel had helped to prolong the life of the tubing but this was nothing more than a running repair. A more permanent solution was required.

Following the initial discovery of corrosion through the regular maintenance inspection programme, TEi removed sample sections for analysis at the company’s metallurgy laboratory in Wakefield, UK. Only then did the full extent of the problem become evident.

Through the evidence provided by the metallurgy lab and TEi’s previous experience of in-situ repairs, it was recognised that a long-term solution would require modification of the superheater tube bank. Manual application of an Inconel overlay would not be feasible on this scale, which is why TEi has invested in developing its own machinery to carry out an automated overlay process. This waste incineration plant is the first installation to benefit from the new development. In this particular case a sufficiently thick deposit of lnconel 625 has been overlaid onto carbon steel tubing before bending the tubing into the required finished profile. Tests so far show a life expectancy of at least five to six years for these new tubes compared with one year for the originals.

With all the tube stacks removed from the boiler the necessary redesign was carried out by TEi and the stacks modified using the lnconel overlay tube to replace the original and now severely corroded carbon steel. The tube stacks were then shipped back to site for reassembly and eventual recommissioning. The entire job was completed in less than four weeks.

The use of a wear resistant overlay such as lnconel 625 remains the most effective solution to the problem of boiler tube erosion and corrosion in situations where it is not possible to control the material being burned by the plant. It extends the life of these key parts of the boiler at a cost made viable by the reduced requirement for shutdown to carry out short-term emergency repairs. TEi can now offer this solution on all new-build installations and also offers a retrofit or maintenance option for existing waste-burning plants in the UK and elsewhere.