Going under, staying under – the impact of the low oil price

With the price of oil at a record low, cutbacks and redundancies are becoming routine across the industry. But just how bad do things need to get before the decommissioning of unprofitable fields turns into abandonment? As the market turns bearish, Greg Noone looks at the difficult choices multinationals are beginning to face in retaining extraction opportunities over the long term. 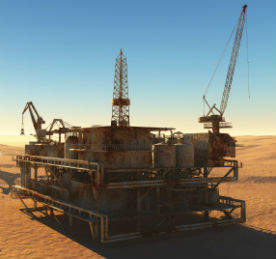 Removing an oil rig from the North Sea is as tricky as you might imagine. Scuttling them is illegal under UK law, so evidence of their existence has to be completely erased. The topside has to be cut from the legs, and both parts precariously hauled upward by hydraulic cranes on to appropriately huge ships. The broken remnants of the platform are then hauled to the nearest breakers yard, where they are meticulously and sustainably destroyed.

Oil companies operating in the North Sea have been dismantling their rigs in this way since 1999, but with this slump in the global oil price, the decommissioning of production infrastructure is on the rise. What was hitherto considered symptomatic of the ‘slash and burn’ attitude of the sector towards depleted undersea fields is now regarded as embodying an industry in crisis.

The global oil market is in the grip of overproduction. The renaissance of fracking in North America has hailed the arrival of an extraction method that can deliver plentiful amounts of shale oil into the marketplace from easily accessible locations. The OPEC nations, meanwhile, have not restricted their own production, with member states Iraq and Saudi Arabia even increasing their output of crude. The result has been a general plummet in the price of oil.

The consequences for Western oil companies have been dire. 11 profit warnings were reported within the FTSE Oil and Gas segment in 2014, up from seven the previous year. After negative price forecasts by the investment bank Jefferies in December, the share prices of exploration corporations such as EnQuest, Afren and Ophir Energy tumbled markedly. By April of this year, another 16 profit warnings were ascribed directly to the low price of oil, eight of which came from oil and gas companies.

Among the companies hit hardest was Petrofac, which announced that shareholders would face a "difficult period" after its net profits dropped to $500 million. The company’s share price promptly plunged 26%, wiping another $1.4 billion off its market value and forcing its ejection from the FTSE 100.

"With no sign of the market stabilising to a price equilibrium that would make offshore and shale consistently profitable, many oil companies have cried out for aid from national governments to help sustain their existing operations."

As many of these companies scramble to restructure themselves, most of the costs have been passed on to shale and offshore rigs. In April, oil services company Schlumberger announced it was facing redundancies numbering 20,000 across its global operations. In July, Royal Dutch Shell announced another 6,500 jobs would go in a new cost-cutting initiative. And in the US – the epicentre of the fracking boom – official jobs data recorded that over 59,000 workers in the oil services and 10,000 in the production sectors had been made redundant.

These losses have effectively ended the capacity of the industry to maintain the same level of production infrastructure it enjoyed when the price stood at $100 a barrel. In July, a study by the consultancy Wood Mackenzie claimed that 46 new oil and gas extraction projects have been deferred. That amounts to over $200 billion in spending and an estimated 20 billion barrels of oil remaining in the ground. In February, Shell announced the closure of a major extraction platform above the Brent field, with another expected to be wound down in the next few years. In the Gulf of Mexico, 981 rigs have been decommissioned since October 2014.

At the time of writing, the pattern of closures does seem to be reversing, with a small increase of 12 new rigs announced by oil services giant Baker Hughes. Nevertheless, that still spells a miserable 0.2% overall growth, within a sector singularly unenthused by the prospect of expansion.

With no sign of the market stabilising to a price equilibrium that would make offshore and shale consistently profitable, many oil companies have cried out for aid from national governments to help sustain their existing operations. In the UK, this has come in the form of tax relief, with pleas from North Sea oil producers responded to by Chancellor George Osborne in his July Emergency Budget. The latest data made available by the UK Office of National Statistics indicates that national output is up, partly thanks to this action.

In the US, attention has focused on lifting regulatory constraints. Since 1975, exports of crude oil have been prohibited to those without a licence. Since 2012, a few companies have been granted permission by Congress to export small volumes of crude oil. However, their example has not proven enough to stall a growing effort from representatives of oil states lobbying to shelve the statute entirely.

Their argument is certainly compelling. A large volume of the oil produced by shale rigs in the US is what is termed ‘light crude’: extracted from areas isolated from major transportation links, and too far from refineries equipped to process anything other than heavy crude oil. A more liberal export regime would allow these producers to sell their wares abroad, thereby increasing employment and adding billions in GDP to the American economy.

Critics of this approach say that liberalisation will do nothing of the sort. They argue that introduction of US crude exports into an already saturated global market will only serve to depress prices even further. After all, exploration is still proceeding in dozens of locations, with Shell and BP announcing expensive new exploration initiatives in the Arctic and other companies exploring the viability of fields off the Falkland Islands, New Zealand and Philippine coasts.

Not that this means exploration might lead to immediate extraction, especially given the typical 15-year gap between the two – even if spurred by a consistently high oil price. A raft of share price falls across oil exploration firms in July, as well as the prospect of Iranian re-entry into the market as sanctions are lifted, has also seemingly quashed the notion that any price resurgence is just around the corner.

Whatever the case, the sheer scale of cutbacks in infrastructure spending by major oil companies means they will find it hard to meaningfully exploit a price rise in the short to medium term. In fact, it could be a matter of years before some sort of price equilibrium is regained, and if it happens, the intervention of national governments guarantees that an equitable balance may become the new normal.