In February Dong Energy exported the first power from its 252 MW Gode Wind 2 offshore wind farm in the German North Sea, and then in May the last of 97 Siemens 6 MW turbines were installed at the Gode Wind 1 and 2 sites, bringing the combined capacity to 582 MW. Energisation of the first turbine coincided with the start of 10 weeks of trial operations at TenneT’s delayed 916 MW transmission hub. 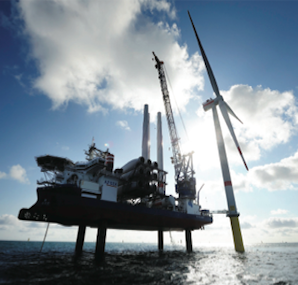 At-sea construction of Gode Wind 2 using A2SEA’s Sea Challenger (pictured) started in April 2015. The project is 50% owned by a consortium of Danish pension funds including PCA, Industriens Pension, Pension and Lærernes Lægernes. Both Gode 1 and Gode 2, which are located some 33km North of Norderney island, are scheduled to be fully commissioned later this year.

A2SEA’s Jens Frederik Hansen said: “The turbine installation has progressed seamlessly and as planned throughout the winter. We experienced some rough and challenging weather during January and February but … we managed to deliver safely, on time and on budget.”