German wind industry looks to the skies for inspiration

With demand for renewable energy increasing in Germany, the country’s wind sector is under pressure to generate higher levels of power than ever before, but current designs simply aren’t up to the task. Could the aerospace sector provide the solution? Elly Earls meets Birgit Wieland at the German Aerospace Centre (DLR) to find out. 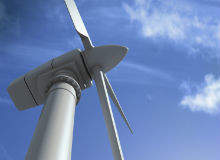 Wind energy is big business in Germany. Indeed, new wind power installations grew by 26% in the first half of this year, a faster rate than in previous years, despite delays in building offshore turbines. The country added 1,004MW of installed capacity during that time, and BWE wind power group and VDMA Power Systems expect that to rise to 2,400MW (equivalent to the output of two nuclear power stations) by the end of 2012.

Unsurprisingly, Germany is already Europe’s leading wind turbine manufacturer, and currently ranks third in the global market, behind only China and the US. Moreover, growth in this sector shows no sign of slowing, with Chancellor Angela Merkel aiming to increase renewable energy to at least 35% of power generation by 2020 and 80% by 2050. As 37% of Germany’s current renewable power comes from wind turbines, an increase in the amount of wind power generated is going to be a key part of its ambitious strategy.

But this will be far from an easy task. Expanding existing wind farms and building new ones, using the same wind turbine technology in use now, is not going to be enough. Nor is simply making the turbines we have now bigger. The industry needs to go further and consider new materials, new manufacturing methods, and intelligent ways of improving the performance, reliability and efficiency of the enormous energy generators set to power Germany’s future.

Fortunately, help is at hand from a somewhat unlikely source: the German Aerospace Centre (DLR). While DLR is primarily a research centre for aeronautics and space-related projects, the interdisciplinary organisation also carries out research and development in transport, defence, security – and energy.

And when it comes to wind power specifically, the centre’s expertise is particularly relevant. Aircraft are driven forward by the reaction to airflow generated by their turbines and fans, and the laws that apply to this process are also valid during its reverse: when an existing airflow drives a wind turbine to generate power.

Researchers at DLR have therefore set out to apply findings from their aeronautics research to the increasingly pressing issue of wind power generation.

"Some of DLR’s technologies fit very well with wind energy," confirms Birgit Wieland, research engineer at DLR’s Institute of Composite Structures and Adaptive Systems. "Aeronautical automation techniques can help to produce future rotor blades faster and more cost-effectively, as well as making them more reproducible. Moreover, the design of longer and more efficient blades can be enabled by materials known from aircraft, and our experience in composite design can reduce the development time for future rotor blades."

The fact is that current wind turbine designs are not going to be able to meet the increasing renewable energy demands in Germany and worldwide. The largest turbines currently in operation have a capacity of 5-6MW, but the European Upwind project, which ran from 2006 to 2011 and looked at the design of very large wind turbines, has predicted that 20MW wind turbines are likely by 2020, and it is impossible to upscale today’s turbines in order to generate that kind of power.

In fact, Upwind’s virtual 20MW design was unanimously assessed by members of the project as uneconomic and almost impossible to manufacture. It would weigh 880t on top of a tower, making it impossible to store at a standard dockside or install offshore with the current installation vessels and cranes. Moreover, the support structures necessary to carry such a huge mass, placed at a height of 153m, are impossible to mass-manufacture today, and blade lengths would exceed 120m, something that cannot be achieved using today’s technologies. It simply wouldn’t be feasible.

Wind turbine design essentially needs to be overhauled, and for Wieland this means changing three key things: the materials, the manufacturing methods and the intelligence of the products.

At DLR’s Institute of Composite Structures and Adaptive Systems, researchers are developing rotor blades with a high carbon fibre content, which will be five times stronger and stiffer than those available now; they will also be significantly lighter.

For Wieland, the agency’s experience in the aeronautical sector has been essential to this work. "In the aerospace sector, the development of fibre composites has grown within the last 40 years," she says. "The emphasis has been, in addition to material development, on extremely lightweight structures and very high quality standards. The objectives have been different compared with the wind energy industry, which has traditionally focused on the minimisation of rotor blade costs."

Yet the priorities of the wind sector are increasingly becoming more aligned with those of the aerospace industry.

"DLR is going to contribute by developing new materials and material combinations," Wieland notes. "We aim to increase the design life and reduce the weight of the rotor blades. New design concepts, inspired by aero-structures, will also be considered."

"The loads can be reduced by using the coupling effects in composite materials, better load transmission between blade and hub and a detailed knowledge of aerodynamic structure coupling with direct integration in the design process."

In addition, many other types of composite will be considered and researched by DLR. "To achieve higher efficiency of rotor blades, there is a need to research new materials such as metal-composite hybrids, nano-composites, bio-fibre composites or elastomer-composite hybrids," Wieland remarks.

Yet these new types of rotor blades cannot be produced without a significant improvement in manufacturing technology, another key area on which DLR is currently focusing.

"The main goal in manufacturing rotor blades is the enhancement of reproducibility to ensure constant quality," Wieland says. "New design concepts cannot be realised without improving the manufacturing technology because it is not possible to produce them manually. Moreover, in all developments, the cost aspect has to be taken into account. The price of a rotor blade will not be able to rise significantly in the future so it is our challenge to build up a robust and efficient automation model."

"As 37% of Germany’s current renewable power comes from wind turbines, an increase in the amount of wind power generated is going to be a key part of its ambitious strategy."

Currently, DLR is focusing on two particular aspects of wind turbine manufacture: quality control and fibre placement. "The platform OnQA [Online Quality Assurance in Autoclave Processing] will be improved and adapted for wind energy, and GRoFi [Large-Scale Parts in Fibre Placement Technology] will give the chance to ‘simulate’ different automation scenarios," Wieland explains. "DLR has the advantage of working with the whole production chain, from the basic materials to the finished parts, so there will be strategies to improve the whole process. This is necessary because, when talking about fibre composites, all steps are connected and influence each other."

In high winds or gusts, the rotor blades of a standard wind turbine have to be feathered or completely turned away from the wind. However, DLR hopes to apply intelligent aeronautical technology to the wind turbines of the future to eliminate this problem, therefore improving their efficiency.

Droop noses were originally developed for the wings of commercial aircraft to enable them to take off or land with higher lift coefficients, lower noise levels and reduced drag. But this technology could also be useful for the wind energy sector: by using a droop nose, the air resistance of a rotor blade could be varied, depending on the wind strength, meaning a wind turbine could work more hours at full load.

"It could adapt the profiles for light and strong wind situations to raise efficiency," says Wieland.

But this really is only an idea at the moment.

"In the coming years, it has to be proved that these technologies are able to upgrade rotor blades by reducing loads and aerodynamic vibrations, and by increasing efficiency while fulfilling the demands of cost and robustness," the research engineer acknowledges.

Droop noses are by no means the only intelligent technology DLR hopes to apply to the wind sector, however, and Wieland’s colleague Thomas Gerz, head of department at DLR’s Institute of Atmospheric Physics, is also keen to emphasise the agency’s work on remote sensing technology. This could produce more precise predictions of wind speed at wind farms, therefore optimising the control of turbines and precisely predicting power input into the grid.

"Continuous measurement means wind data can be assimilated into short-term wind predictions, so-called ‘now-casting’," Gerz remarks. "These short-term predictions, including the prediction of turbulence, are becoming more and more accurate, allowing for more precise control of wind turbines by anticipating wind gusts which could impinge on the blades in the near future."

It is simply impossible to upscale current wind turbines to enable them to produce the amount of power necessary to meet Germany’s future renewable energy demands; something different – and drastic – needs to be done. But with help at hand from the aeronautics industry – particularly its materials and manufacturing innovations – change could be under way sooner rather than later.