Something is stirring in the depths of the geothermal world. Siemens is to build two plants for generators in Germany, both based on the novel Kalina cycle. Meanwhile in Iceland MHI is to supply two 40 MW turnkey geothermal plants for Orkuveita Reykjavikur’s existing 80 MW site at Hellisheidi. 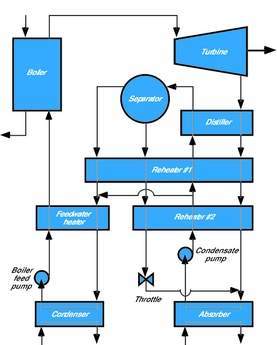 Local co-operative Geothermie Unterhaching GmbH und Co. KG is to purchase from Siemens I&S a turnkey geothermal power station to be sited at Unterhaching, near Munich. Scope of supply includes the turbo-set, a heat-exchanger circuit, the cooling system, the entire electrical power equipment up to and including power input to the grid and also the instrumentation and control system. The plant is designed to generate 3.36 MWe and will operate on the Kalina cycle, a process particularly suitable for geothermal aplications owing to their higher thermal efficiency compared to conventional installations when converting low grade heat sources into electrical energy. Siemens is also responsible for constructing the administration building and the machine building including noise protection measures and will provide maintenance for the power station for the first ten years of operation. The total value of the contract amounts to around r16 million. The start of commercial operation is scheduled for mid-2007.

Unterhaching, near Munich, is situated in the south-German Molasse basin. Here, the porous limestone contains hot water at a temperature of over 100 °C at a depth of around 3000 m. In order to exploit this source of hot thermal-spring water, the community, which has 21 000 inhabitants, established Geothermie Unterhaching GmbH und Co. KG and remains the sole owner. A drilling operation carried out in summer 2004 encountered water with a temperature of 122 °C at a depth of 3300 m. The resulting well can produce a supply of hot water at the rate of 150 l/s. Of this, 25 l/s will be used to generate heat for the district heating system while the remaining 125 l/s will be used to generate 3.36 MW of electrical energy in the new geothermal power station.

Siemens will supply and install all the above-ground parts of the power station installation. This includes the heat-exchanger circuit, the steam turbine with generator, and the cooling circuit, as well as all the automation and control systems which will be based on Simatic PCS7.

The heart of the new power station is the heat-exchanger circuit which will function according to the Kalina principle, in which a mixture of water and ammonia is used as the working medium. Compared to single substance fluids with a constant boiling point such as water or pentane, this mixture boils over a large temperature range at a defined pressure. The heat efficiency of the Kalina principle is considerably higher than a water-steam circuit or organic Rankine circuit (ORC) and will allow economically efficient operation of the plant even at low temperatures.

Siemens is also supplying all the power systems and equipment, consisting of medium and low-voltage transformers, a 22 kV, a 6 kV and a low-voltage switchgear installation as well as the power distribution, direct current supply and grounding equipment. The company is also responsible for construction of the administration building including control centre, the machine building and the cooling tower basin. The contract involves maintenance of the geothermal power station during the first ten years of operation.

In the hot zone

Siemens I&S is to plan and build a second turnkey Kalina cycle plant, this one for HotRock Erdwärmekraftwerk Germersheim GmbH & Co. Objekt KG, in Bellheim near Landau in the German state of Rhineland-Palatinate. The scope of supply and services covers the turbine generator set including the turbine, gearbox and generator, the heat-exchanger circuit, the cooling circuit, all the electrical equipment and control system, as well as construction of the control centre building, power house and cooling tower basin. The plant is designed to have an output of 6.4 MW. A coal-fired power station with the same output would emit some 29 000 tonnes of CO2 per year.

The small town of Bellheim is situated in the Upper Rhine Graben, and therefore in the “hottest zone” – in geological terms – in Germany. Temperature gradients here can be over 50°C per 1000 m. The bore hole in Bellheim, extending to a depth of almost 3000 m, is expected to supply water at a temperature of 165°C.

Siemens is responsible for the complete planning and construction of the above-ground components of the power plant. These include the evaporator-condenser circuit, the steam turbine with generator, and the cooling circuit, as well as all the automation and control systems.

MHI is to supply two 40 MW turnkey geothermal plants for Orkuveita Reykjavikur’s (Reykjavik Energy’s) Hellisheidi site located 20 km east of the capital. The steam tubines will be manufactured by MHI, the generators by Mitsubishi Electric, and the condensers and cooling towers by Balcke-Duerr.

These will be units 3 and 4 at the site, which already contains two similar plants supplied by MHI in 2004 and will bring to 340 MW the capacity of geothermal energy plant supplied by MHI to Reykjavik Energy between 1978 and the present day. This totals 10 units in all, commencing with the Krafla power station (two 30 MW plants) delivered in 1978, followed by four 30 MW plants for the Nesjavellir power station and units 1 and 2 for Hellisheidi, each 40 MW. The two new units are scheduled to go on stream in 2008. Their output will be supplied mainly to local aluminum refineries.