GEHI to reach from Brazil 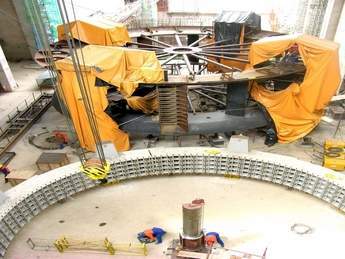 GE Energy recently transferred its hydro global headquarters to Brazil and announced the expansion of a joint venture called ge-hydro Inepar (GEHI), which has been based in the state of São Paulo since 1998. The JV has been a co-operation between GE’s local business General Electric do Brasil Ltda and Brazilian industrial group Inepar S/A Indústria e Construções.

The decision to move GE’s hydro HQ was motivated by Brazil being one of the largest hydro generation markets in the world, GEHI says. It adds that the JV’s “excellent” economic results as well as its performance in quality and deliverance were other determining factors in choosing Brazil to be global HQ also of the expanded GEHI.

Initially conceived to attend the Brazilian market, GEHI has been present in recent years in many of the main hydroelectric projects in Brazil and Latin America. The expanded JV will now serve beyond the region with responsibility for covering the entire global hydro generation market.

A large part of GEHI operates in Campinas, in São Paulo state. Following the strategic change by GE Hydro, the JV’s unit in Araraquara – one of the most important industrial centres of Latin America – will be home to a good part of its expanded structure. The investment in Araraquara last month attracted local tax incentives in recognition of the boost to employment (adding approximately 300 direct jobs plus many indirect jobs) and income. To guarantee the success of the joint venture, GE Energy is investing heavily in technological and human resources, manufacturing equipment and on the construction of a turbine development hydraulic laboratory.

The JV plans to expand its infrastructure to have the largest turbine and generator manufacturing plant in Latin America, with the capacity to process thousands of tonnes of equipment each month. It plans to double its industrial production capacity over approximately next three years, including benefiting from the transfer of GE Hydro manufacturing equipment. Under the changes to its hydropower operations, GE Hydro will also close its workshop in Lachine, in Montreal, Canada, by the middle of this year.

GE Energy is progressing a technology transfer programme with the JV that involves transferring design documentation, reference projects, training of GEHI engineers in all the activities related to design, manufacturing and installation of turbines and generators. The training of the hydraulic engineering team is on course to be completed by September this year, GEHI says.

The investment move is a strategic step with both industrial groups investing more capital in GEHI. While the percentage ownership split in GEHI was not immediately determined at the outset of the new strategy it was agreed that GE would be the majority partner, and IWP&DC understands that the capital invested by the group will be accounted for primarily in equipment and facilities, the minority of the equity being cash. The total being invested is approximately US$140M.

Much of the equipment and facilities are for the JV’s new hydraulics lab, the first in Brazil, which GE is funding. The laboratory will, though, house equipment from both firms. Construction of the facility and installation of equipment is expected to take approximately two years. The lab will have two universal test stands for low to high head models. The first test stand is to be in place by September 2009 and be able to test any type of turbine (Francis, Kaplan, Bulb, Pelton, reversed pump turbine, etc). The second test stand will be used for the research and development of new products.

The lab will receive the majority of GE Hydro’s model references from across the world. Until the technological transfer process is concluded, however, in terms of design, including the development of hydraulic profiles, the hydraulic work will be conducted in Finland, Norway and the new Montreal Engineering Center (MEC).

With respect to future operations, GE and Inepar will, within the JV, set up mechanisms to ensure that optimum risk measures are used in line with the scale of contracts being sought. It could be that for particularly big project bids the JV would be backed by GE with commensurate requirements.

While Brazil will be the prime base for GE Energy’s future global activities in hydropower, the group will have some assets elsewhere, such as in Canada and in parts of Scandinavia.

GE is working on the creation of the Montreal Engineering Center (MEC), composed of key people in Lachine, and this is to continue to support all the required GE Hydro activities. The engineering and project management functions are working to complete GE Hydro’s local, and international, backlog of hydropower work.

GEHI also incorporated the GE Hydro operations in Sweden and Finland, including the manufacturing facility and a hydraulic test lab in Tampere, Finland (low head lab) and has negotiated an agreement to use Rainpower ASA’s lab (formerly GE Norway’s) in Trondheim, Norway, and engineering capability for high head until the technological transfer process is completed.

Rainpower was launched in November 2007 following the transfer of the lab from GE to its owner, the Norwegian industrial group Nordheim Larsen Industrier (NLI). The owner had previously acquired the workshop in Sorumsand, near Oslo, from GE. Previously, in 1999, GE had acquired the lab and workshop from Kvaerner Energy and, in effect, the team and assets of Kvaerner Energy are now in Rainpower, which is now based in Kjeller, near Oslo.

Under the changes, GE says its hydro staff will have the opportunity of working with the JV or possibly other energy sectors within GE.

In China, the workshop of GE Hydro’s local market JV is completing its backlog of hydro orders and the plan is that afterwards it will move on to serve other energy sectors.