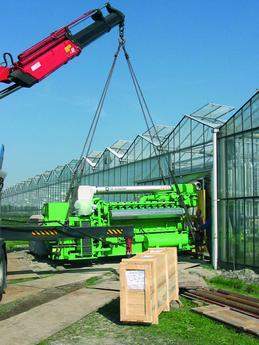 For ten years GE Energy’s subsidiary the reciprocating engine manufacturer Jenbacher has been fostering the specialist greenhouse segment in The Netherlands by working with companies that have pioneered CO2 fertilisation in horticulture. This policy is now bearing fruit, to the extent that an important group of commercial growers has contracted with the company for a bulk order of gas-fired cogeneration systems to boost crop production and improve their export position. It has also prompted GE’s Jenbacher gas engine division to designate its Netherlands operation as the company’s global ‘centre of excellence’ for horticultural and agricultural applications, supporting all GE Jenbacher offices worldwide with their greenhouse projects.

GE set out to develop an integrated system configuration that in respect of its controlled heat/ power/CO2 capability and its pre-engineered format based on a standardised CHP engine/generator set would be tailored to this very specialised market. It has now sold 450 engines in this configuration into that market, in about 300 individual installations, and developed a close relationship with user associations: these actively help growers with new

installations, and broadcast user experience, both the good and the less good, among their members.

GE is currently supplying 17 of its CHP systems to one organisation of users, the Prominent Growers Association, which consists of 21 commercial tomato growers, for use at various greenhouses around the country. The 17 units vary somewhat in output, but in total, they will generate 46.3 MWe and 55.3 MWt. GE has installed 12 of the units to date, the most recent having been commissioned earlier this year.

The Jenbacher gensets are providing the growers with what GE describes as a reliable and cost-effective on-site supply of power for assimilation lighting, plus heat and CO2

This technology allows Prominent’s members to manage their production schedules and achieve almost the same production levels in winter as in summer and increasing overall yield by around 10 %. And it sits well with the association’s approach to crop production, combining engine technology with the growers’ emphasis on using natural methods for managing the pollination of their crops as well as protecting them from insect damage.

“By pursuing a perfect climate and measuring out the right amount of water and fertiliser, we are able to produce a product which meets all relevant international guidelines,” said the owners of one of these businesses, the brothers Ariën and René van der Lans (see photos above and left).

Plants grow by converting CO2 to other carbon compounds through photosynthesis. The optimal CO2 level varies from crop to crop but generally lies between 700 and 800 ppm: air usually contains approximately 350 ppm CO2. With the increased use of artificial lighting in greenhouses, plants are active for longer periods and so absorb even more CO2. If the greenhouse atmosphere can be enriched with CO2, plant growth and consequently the harvested yield can be increased, routinely by 10% but up to 40% in extreme cases. Economy is helped by an arrangement to sell surplus electricity at an attractive rate on the Amsterdam APX bourse.

GE’s natural gas-fired engines are equipped with a technology that produces CO2 in a suitable proportion and level of purity in the exhaust gas. The gas passes through a two stage selective converter, essentially an SCR followed by an oxidation catalytic converter. The first stage reduces NOx in the presence of urea. The second stage, catalysis in an oxidising environment, reduces the proportion of CO and unburned hydrocarbons. Reducing the latter from approximately 1000 ppm in the exhaust to values well below 1 ppm in the purified exhaust gas aims at the elimination of ethane, which would be harmful to the plants. The gas product is cooled from its residual 120 °C to around 55 °C (incidentally adding to the greenhouse heat supply and thereby in some circumstances raising the perceived fuel efficiency rating above 100 %) before being passed into the greenhouse as a fertiliser. A monitor that constantly measures the relevant values of the exhaust gases ensures that the CO2 remains within optimal limits.

What constitutes ideal conditions varies from crop to crop. Roses need a light level of 12 000 to 15 000 lux, tomatoes typically

11 000, while peppers will make do with only 4-5000 lux. Ideal CO2 levels are in a rough correspondence to these light levels.

During the warm months of the year, surplus engine heat is sent to a buffer storage hot water tank with a capacity in the order of 200 m3 per hectare to heat greenhouses during the night time when lighting and CO2 injection is redundant and generators are switched off. It is this appropriate use of stored heat, together with the value of CO2 injection, that allows greenhouses utilising gas engine cogeneration systems to cover the power needed for artificial lighting and their heat requirements in an economical manner, while effectively utilising the climate-relevant CO2 of the

engine exhaust gas as fertiliser for the plants.

When burning natural gas in gas engines, approximately 0.2 kg of CO2 is produced per kWh of energy input, resulting in an exhaust concentration of around 5 to 6% by volume. Lean running is necessary to help in meeting Holland’s tight NOx emissions regulations of 500 mg/m3. Combustion control in these applications is by Jenbacher’s LEANOX lean mixture combustion control which is designed to ensure the correct air/gas ratio under all operating conditions to minimise emissions while maintaining engine stability.

The frame conditions for cost-effective greenhouse applications differ widely from com country to country and from crop to crop, but to give a rule of thumb, efficient operation is said to be possible with approximately 1 ha (about 10 000 m2) or larger greenhouse areas. CO2 fertilisation is suitable for nearly all plant types, and supplementary illumination is suitable for both vegetables and flowers.

Given these figures, the decisive factor for economical plant operation would be maintaining high electrical efficiency.

The benefits of this kind of CHP system in greenhouses are said to be:

• High overall efficiency levels of up to 95%, and a corresponding contribution to resource conservation

Increasing the value of a rose

GE Energy sold its 500th gas engine in The Netherlands to a rose grower that uses it, with its CHP system, to generate light, heat and CO2 for its greenhouse operations. Fuelled by natural gas, the cogeneration system has a total electrical and thermal output of 2.4 MW, and, under optimum load, an overall efficiency of 93.7 %. The two companies have also signed a 10-year maintenance agreement.

The grower, Win & Bernadette Bijman, located in the village of Obdam, ordered the Jenbacher JMS 320 GS-N.L cogeneration system to generate electricity needed for the assimilation lighting of 19 000 m2 of greenhouse space. As a result, the company is able to produce cut roses during the winter in almost the same quantities as during the summer months. In addition to producing power, the engine will provide heating for the greenhouses. GE also supplied its CO2 fertilisation system, acoustic housing, silencers, and a DIA.NE XT engine control system. This is GE’s latest network-enabled controller. It is Windows based and comprises powerful central industrial controls that handle master and feedback control for the engine plant, as well as visualisation, and incorporates comprehensive analytical and trend identification functions. A link with central process control is provided, via standard industrial buses or using direct signal lines.

This cogeneration system was the 500th engine GE’s Jenbacher gas engine division has sold in The Netherlands since it began selling gas engines in this country 15 years ago. In combination the 500 engines have a total electrical power output of 610 MW.

The unit was built at GE’s Jenbacher facilities in Jenbach, Austria, site installation was completed in June 2004 and the unit went into full commercial operation at the beginning of October 2004.